The IMD has predicted heavy to very heavy rain in Mumbai in several parts of the city on Saturday. People wading through water on a street in Mumbai on Friday. Heavy rains in Mumbai threw the road and rail traffic out of gear (Express photo)

The Indian Meteorological Department has predicted ‘heavy to very heavy’ rainfall in several parts of Mumbai on Saturday. Friday witnessed heavy showers in the city, inundating several localities and neighbourhoods and throwing rail and road traffic out of gear. Indian Meteorological Department (IMD) director V K Rajeev attributed the heavy rainfall to an offshore trough and upper cyclonic circulation over the Arabian Sea.

On Friday, all the three suburban train routes had come to a halt, and severe water-logging was reported at more than 200 locations bringing road traffic to a crawl. The 283 mm rainfall recorded at Santacruz weather station was the highest in 24 hours for June in a decade. The highest June downpour in the last 10 years was 299 mm on June 10, 1991. 4:45 pm: Here is a list of trains which have been diverted or rescheduled:

4:15 pm: Check out how sea water is gushing through a manhole in Dadar’s Gandhi market. And, the water even carried fishes, which were promptly caught by the locals. 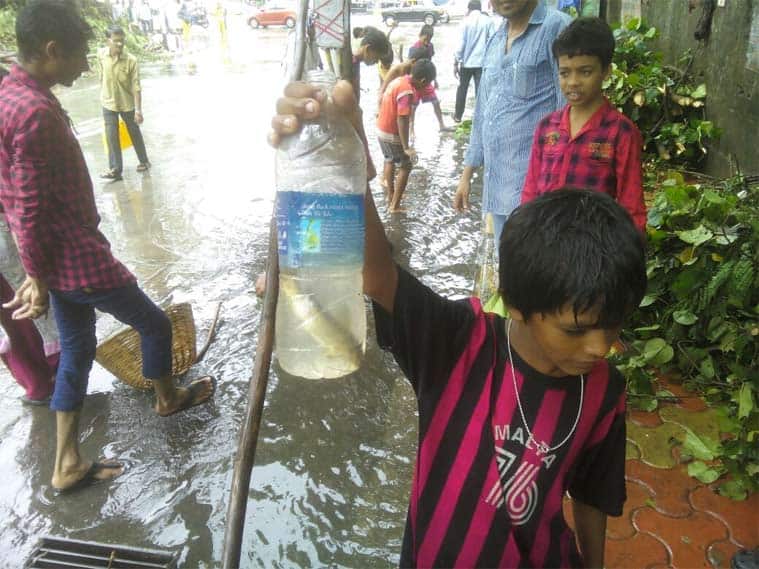 People found catching fish from the sea water gushing out from a manhole cover at Gandhi market. (Source: Express photo)

Not convinced? Watch the video here.

1:40 pm: Here are the details of trains re-scheduled today:

A block is a period of time during which train services are curtailed partly or wholly for repair works and maintenance works to be done. It’s a weekly or bi weekly pain for commuters. Some services would be cancelled, others diverted to fast tracks,, meaning some stations where only slow trains halt would not have services at all for the period of the block. A jumbo block is a longer version, may last 7 or 8 hours. Typically blocks are imposed on Sundays when ridership is low.

11:00 am: Airport operations are normal today so far. Tweeted hooch tragedy copies. Juhu airport is expected to start operations by 1 pm. Runway still flooded and with rain having stopped, airport authorities are pumping out water right now. Juhu airport is mainly used by ONGC and other choppers.

This was the state of the railway tracks on Friday. 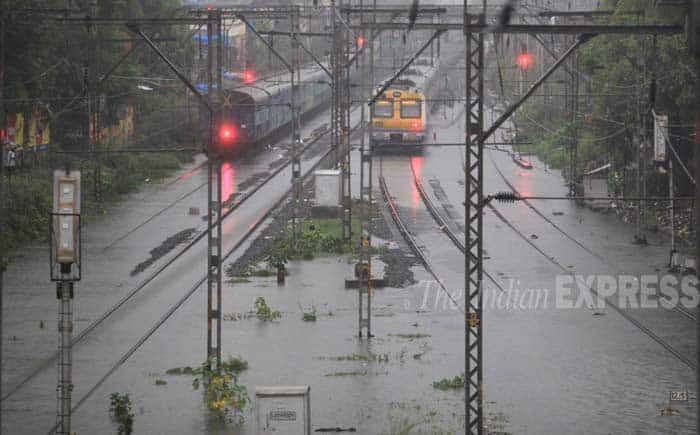 10:10 am: Here are some of the photos that users on Twitter sent us. Take a look.

9:30 am: Traffic diverted by BEST since morning on 13 routes out of which 10 routes are restored. Diversions not restored at Elphinstone, Bandra Talkies & Maheshwari Udyan.

No water logging on tracks & both WR suburban & long distance trains are running as per schedule.

9:00 am: Bollywood actor Farhan Akhtar tweeted commenting on the state of the drainage system in the city. On Friday, several Mumbaikars took to social media websites to complain against the municipal corporation.

I think the Mumbaikar tax-payers money is used to block the city’s drainage system. #everyyearsamestory