In urgent need of being human: Mental hospitals With no clear understanding of their rights as patients and with their families wary of angering the staff, official complaints are almost nil.

In the 1,850-bedded mental health hospital in Thane, Govind Singh Kathayat sweeps floors, sometimes even cleans toilets to avoid getting beaten up by ward boys. His friend, Altaf Batliwala, has not been so lucky. He has been subjected to several blows for refusing to give money to a ward boy.

In Pune’s 2,400-bedded Yerwada Mental Hospital too, similar tales emerge from relatives and patients, of unofficial complaints
being made against class IV employees of the institutions.

With no clear understanding of their rights as patients and with their families wary of angering the staff, official complaints are almost nil.

But at both institutions, such employees are known to boss around over patients.

“Yahan ka jhaadu maar, warna khana nahin dege (Sweep otherwise, we won’t give you food)” — is the threat several patients receive. “The ward boys sometimes ask us to take money from our family and give it to them,” Kathayat, who was discharged from the hospital two months ago, told The Indian Express.

Kathayat has been admitted in the hospital eight times for depression. “I have stopped arguing and just do what they say, so that I get enough food to eat and not get thrashed,” he said.

Batliwala, still admitted in ward 19 of the Thane hospital for bipolar disorder, says he has been given less food when he refused to obey the ward boys’ orders. He has also been beaten up once by other patients allegedly after a ward boy instructed them to do so.

Despite a Bombay High Court’s directive in 2009 to assess the condition of all four state-run mental hospitals — in Thane, Pune, Nagpur and Ratnagiri — that house close to 4,500 patients, improvements in the hospitals have still not been substantial. In the past too, there have been reports of patients facing violence within the state-run institutions.

Of the close to 5,450 beds available in the four hospitals, occupancy ranges between 70 per cent and 80 per cent. Of these, the number of permanent patients requiring long term treatment are 140 in Thane’s facility, 350 in Yerwada hospital, close to 50 in Ratnagiri and over 100 in Nagpur’s mental hospital. 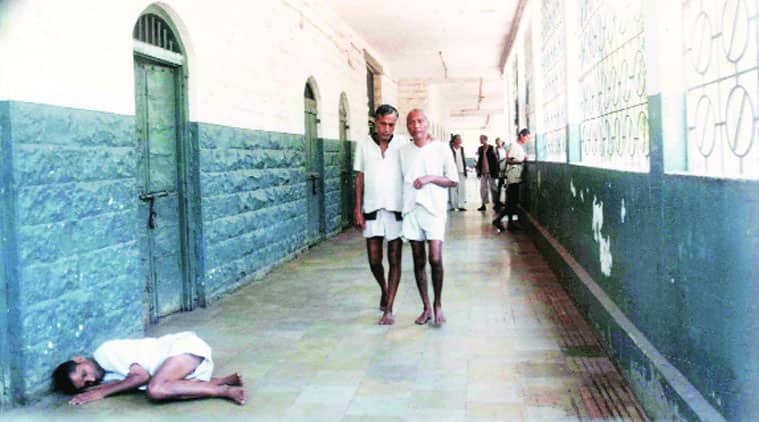 According to norms laid down by the Union government for a mental health institution, there must be one psychiatrist and one medical officer for every 100 patients and one ward attendant for at least five patients. With a massive shortage of trained psychiatrists across state-run hospitals, the psychiatrist-patient ratio is well below standard. Instead, medical officers double up as psychiatrists.

The problem, admit experts, however, is that the ward boys have neither received any special training nor any refresher courses.

According to Yerwada hospital’s matron Sunita Mithe, the ward boys’ usually need to have a primary education, while they may also be school dropouts.

Dr Vilas Bhailume, medical superintendent at Pune’s facility, said: “The ward boys are trained how to handle patients and control their aggressive behaviour.” Dr Rajendra Shirsath, MS at the Thane mental hospital, said that since class IV employees are not rotated and continue to serve in the same posts for years, they learn the techniques of handling mentally-ill patients through experience.

Currently, hospitals are in the process of initiating another round of training to sensitise class IV employees about importance of showing sympathy towards these patients. An official from the Directorate of Health Services, however, admitted: “No criteria or qualification is mandatory for recruitment of class IV employees in mental hospitals.”

In Pune, private psychologist Sherebano Koser, who had visited the mental hospital recently, said: “I could hear the ward attendant hurling abuses at the patient from the next room. The way these patients are treated is sad.” According to current rules, patients may assist in hospital activities such as carrying food to the wards, gardening and during festivals.

However, rules strictly prohibit staff from asking patients to do such jobs as cleaning toilets, sweeping floors or washing soiled clothes of other patients.
While the state government regularly rotates doctors and nurses across a district, ward boys are stationed at one post. In the mental hospitals, some ward attendants have spent decades working in the same ward.

Government officials admit that the reason for their authoritative behaviour is permanent posts.

Dr Shirsath of the Thane facility said, “Last year, we received three complaints. I had punished one attendant for demanding money and beating a patient. Currently, we are receiving complaints from the female ward.”

Yerwada Hospital MS Dr Vilas Bhailume, however, denied that such incidents. “We have received no such complaint. The patients are treated with care,”he said.

Admittedly, no official complaint has been made at either hospital. A patient’s relative, on condition of anonymity, said:
“We have to admit our relative here frequently. By complaining, we will only make matters worse for him.”

According to Dr Manish Renghe, who heads the mental health cell at the Directorate of Health Services (DHS), a suggestion to show a documentary on Baba Amte to class IV employees to sensitise them has recently been proposed. Currently, both the hospitals are preparing training programmes for nurses and ward attendants to teach them the right way to handle mentally-ill patients.

Renghe said, “We have received unofficial complaints specially from Yerwada and Thane hospitals about patients being ill treated.

But the health department has received no complaint from any of the patients or their families. Usually, such complaints are handled
by the medical superintendents of respective hospitals.”

“When I went on inspection to the hospital, I suggested the administration to show documentaries, specially ones made on Baba Amte, to sensitise the class IV employees. Since they have no medical background or qualification, we cannot expect them to know the protocol for handling patients.”

He, however, admitted that an effort to train ward staff regularly is necessary and must be undertaken. “We are coming up with several plans for mental health in the state like starting a mental helpline and redeveloping the hospitals,” he said.

In 2007, the Bombay High Court had demanded an action taken report from the state’s principal secretary for health on the four state-run mental hospitals, following a public interest litigation (PIL) filed by a Pune resident, stating that patients were treated insensitively by staffers.

Following the PIL, a report was filed by the respective chief judicial magistrates (CJM) from the four cities on the hospitals’ existing conditions. The report highlighted major gaps in the food quality, condition of drainage, toilets and water supply in the facilities. While the hospitals have been utilising funds for small infrastructural improvements, such as renovating toilets and installing radios and televisions for patients, patients continue to complain that they are treated harshly.

A senior medical officer from Yerwada hospital said, “We have significantly improved the infrastructure. The toilets have been renovated and a gym was set up two years ago. Depending on the state government’s budget for us, we slowly utilise funds for infrastructural development. Our next plan is to improve roads in the entire premises.”

In Thane, a proposal for renovating senior citizen’s ward has been floated to include new gardens and walking area. Though the hospitals are gradually improving the living conditions of patients, however, medical officers and social workers admit there is scope for improvement in their counselling service.