The majority of goats were reportedly trucked into Mumbai from Rajasthan, Madhya Pradesh, Gujarat, Uttar Pradesh and the interiors areas of Maharashtra. 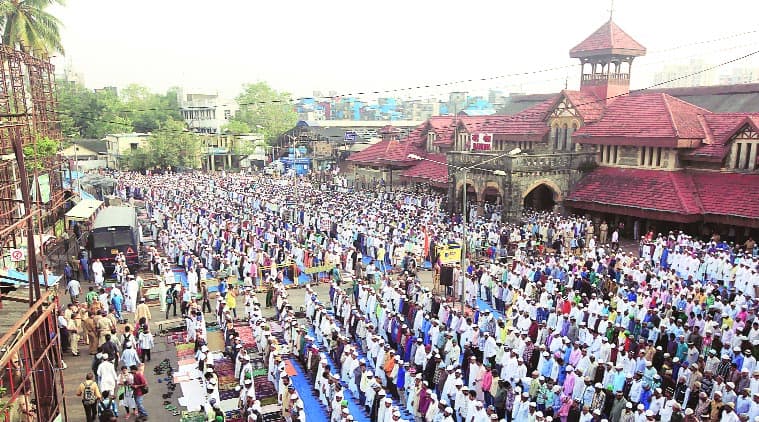 The first Eid al-Adha after the beef ban was imposed in Maharashtra was quite a muted affair with fewer animal sacrifices reported across the city than what generally takes place during the festival.

Many people said they had refrained from offering the sacrifice, which is customary during the festival, as they could not afford to buy goats for the sacrifice. The goats are considerably costlier than cattle and the price had shot up further.

“This time we decided to refrain from doing qurbani because we could not afford to buy a goat,” said Mohammed Irfan, a resident of Govandi.

The sale of goats, which was expected to pick up in view of the beef ban, was also tepid.

The inclement weather also played a role in buyers refraining from purchasing animals, as many of the animals were ill.

Dr Kaleem Pathan, the general manager of the Deonar Abattoir, said: “A total of 1.97 lakh goats reached the market and nearly 1.95 lakh goats were sold in the past few days. The numbers were relatively less than anticipated.”

“We got a sense that the sellers had panicked as sales were not picking up even on Thursday night. We managed to strike a bargain by purchasing four goats for Rs 56,000 even though the seller had initially quoted an amount of Rs 80,000,” said Shamim Shaikh a resident of Andheri.

The majority of goats were reportedly trucked into Mumbai from Rajasthan, Madhya Pradesh, Gujarat, Uttar Pradesh and the interiors areas of Maharashtra.

Jogeshwari resident Anwar Bhatti, who purchased a goat for Rs 12,000, said sanitation was one of the biggest drawbacks for the sellers. “I selected my goats by checking the hind legs and not by any other feature. Goats have also been sneezing and coughing everywhere, putting buyers off,” Bhatti said.

This is the first Bakr Eid after the stringent Maharashtra Animal Preservation (Amendment) Act extended the ban on slaughter of cows to bulls and bullocks in March.

Most Muslims are expected to slaughter goats during the festival.

Though the number of goats in the market has increased since last year, the prohibitive price along with the inclement weather, which made several animals fall ill, have been strong deterrents this festive season. “Only 1,494 water buffaloes were slaughtered. It is not an alternative to beef of bull or bullocks. The mood wasn’t celebratory and it was sensed even in the market,” said Mohammed Ali Qureshi, president of the Bombay Suburban Beef Dealer Association.

An official of the BMC at Deonar said that the prices that were high, dropped to an average of Rs 15,000 to 20,000 towards the closing time of the market.

It is difficult to move on after playing at one place for almost two decades: Wasim Jaffer