The narrow stretch of road snaking away across Kalbadevi’s Mahajanwadi, Babu Genu Road, is completely unremarkable in any way 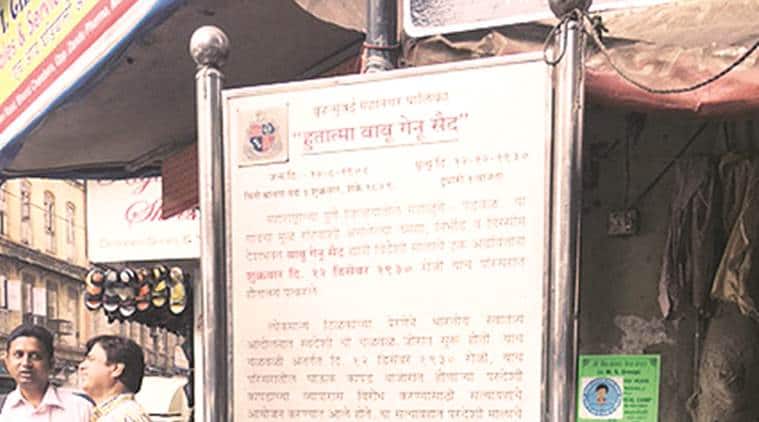 TWO recent tragedies come to mind at the mention of Babu Genu. A municipality-owned building that collapsed in 2013, not far from Dockyard Road, was called the Babu Genu Building. And the 2015 fire in Kalbadevi’s Gokul Nivas building in which four Mumbai firemen died, including the chief fire officer of the time, occurred just yards away from a street-side plaque commemorating Babu Genu.

But perhaps the bigger tragedy is that the plaque stands forgotten, a little grubby. The narrow stretch of road snaking away across Kalbadevi’s Mahajanwadi, Babu Genu Road, is completely unremarkable in any way. Nobody gives the plaque a second look, not in the stores that are of more recent vintage, not the shoppers who’re stepping in and out of the dozen-odd stores selling all kinds of umbrellas from the sturdy Mumbai monsoon champion to a geisha-style parasol, and definitely not the scores of handcart pullers shouting above the din of traffic to get one another out of the way.

The plaque pays a quiet tribute to a Mumbai hero of the 1930s Swadeshi movement, remembering the sacrifice of Babu Genu Said, a Mumbai mill-worker, labour unionist and freedom fighter.

On December 12, 1930, Genu, then aged 22, was among a group of Swadeshi protestors opposing a consignment of foreign goods making its way through Kalbadevi. They were protesting by laying themselves prostrate on the road, refusing to let a truck pass. Though there are differing accounts of the precise events of the afternoon, history books maintain that Genu was run over by a truck in a deliberate act of police brutality.

“The road was renamed about 20-25 years ago in honour of this freedom-fighter,” says Janak Sanghvi, a former corporator from the Bharatiya Janata Party. “I installed the plaque in 2010 when I was the corporator and chairman of the Prabhag Samiti. Our intention was that people of Mumbai should remember such dedication to the national cause.”

History has it that waves of protests rocked Bombay in the hours after Genu’s death, with activists and labourers demanding permission for the brave activist to be cremated at Girgaum Chowpatty, where Swadeshi-proponent Bal Gangadhar Tilak’s funeral had been attended by nearly 2 lakh supporters a decade earlier. Nerves were calmed only after senior Congress leaders stepped in.

Today, barring the plaque at the street corner, there is nothing on the road to suggest that such a historic event occurred here. The umbrella and pharmaceuticals traders along the street weren’t here then. According to some reports, the crowds were gathering near Bhaangwadi, which still watches over the chaos of the busy trading hub of Kalbadevi. Literally translated as the ‘residence of opium’, Bhaangwadi was named so for a row of opium dealers in the vicinity, but was itself a busy performing arts venue, not even 50 metres from where the plaque stands. At least one godown on the street is 90-95 years old, but nobody today can tell where exactly Genu was martyred. Barely 300 metres away from the plaque is Swadeshi Market.

There are other memorials to Babu Genu. Unknown to many, the well-known Kamgar Maidan in Parel is named after him, as is a popular Ganpati manual in Pune.

But it’s the story of Babu Genu’s sacrifice on this street that weaves together disparate threads, all unique to Bombay, to tell the story of the city’s journey to becoming Mumbai. A mill-worker, a trade unionist, a battle for Swadeshi as ordered by the stalwarts, a heroic sacrifice, a Bombay Police account of what transpired that day, a memorial and then, years later, nothing left but a footnote in history books and a forgotten plaque.