A single bench of Justice P D Naik rejected their applications observing that there was "prima facie" material to show their complicity in the alleged offence. 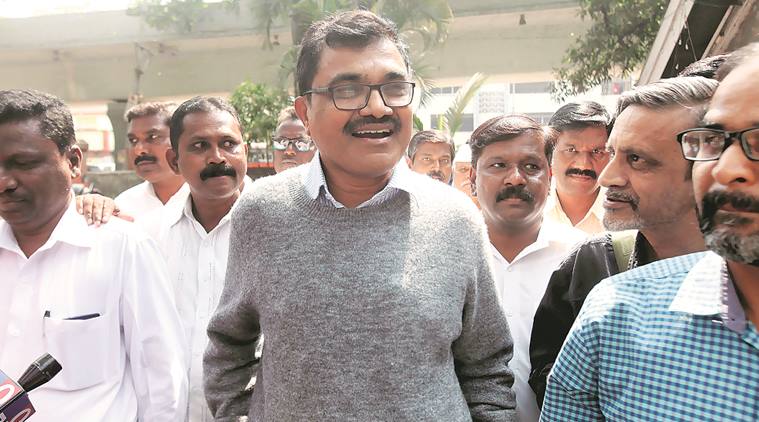 Teltumbde and Navlakha had approached the high court seeking a pre-arrest bail after the Pune sessions court rejected it last year. (File/Express Photo by Pavan Khengre)

The Bombay High Court Friday rejected the anticipatory bail applications of academician Anand Teltumbde and activist Gautam Navlakha, booked by Pune Police for their alleged role in the Elgaar Parishad case. The court, however, granted them interim protection from arrest for a period of four weeks to allow them to challenge the order before the Supreme Court.

Teltumbde and Navlakha had approached the high court seeking a pre-arrest bail after the Pune sessions court rejected it last year.

A single bench of Justice P D Naik rejected their applications observing that there was “prima facie” material to show their complicity in the alleged offence. The high court had reserved the order on December 18, 2019, after hearing both the prosecution and the defence lawyers. It had also rejected an interim application, which was filed by Pune Police, seeking directions that the two men remain present at the time of the passing of the order.

Pune Police had last year filed an FIR claiming that a programme organised on January 1, 2018, at Shaniwar Wada in Pune was a part of a conspiracy by the CPI (Maoists), a banned organisation. The accused were booked under the Unlawful Activities (Prevention) Act along with other charges, including criminal conspiracy.

Special Public Prosecutor (SPP) Aruna Pai had argued before the high court that Navlakha was involved in raising funds, recruiting cadre and weapon deal for the banned Maoist group and was a part of a ‘larger conspiracy’ to destabilise the government. Pune Police had sought custodial interrogation of Navlakha and submitted documents in support of their claims in a sealed cover.

The defence lawyers, however, had submitted that the investigating agency had submitted evidence in a sealed envelope before the high court, copies of which were not given to the accused and hence could not be relied upon.

Justice Naik said that while he had perused the documents, he would refrain from commenting on them. “Apart from the material produced in a sealed envelope, there is sufficient other material to enable the court to reach prima facie opinion regarding commission of an offence under UAPA Act by the applicant,” the court said.

Teltumbde’s lawyer had said nothing incriminating was found at his residence, and the letters refer to Com Anand, which the police have no evidence to show refers to him. He further said he had cooperated with the police probe by attending the police station and that custodial interrogation was not needed.

Opposing pre-arrest bail plea of Teltumbde, Pune Police had claimed that he was an active member of banned CPI (Maoist) group and was working for its alleged frontal organisations, such as Anuradha Gandhi Memorial (AGM), Committee for Protection of Democratic Rights (CPDR) and Indian Association of People’s Lawyers (IAPL). It was argued that these organisations are creating an anti-government atmosphere among the public.

Senior advocate Mihir Desai, representing Teltumbde, had submitted that if the said organisations were frontal to the banned group, they should also have been banned by the state. Since they are still functioning, the state’s claims should be ignored.

The court relied on the Pune court’s observations regarding their alleged involvement in the offence as well as the previous order of the high court rejecting their applications to quash the FIR against them. The case has now been transferred to the National Investigation Agency (NIA).