Don’t wait for students to die before raising your voice: JNUSU president

Aishe Ghosh, who was attacked by masked persons on the campus of the central university on January 5, was speaking at Mumbai Collective, an annual two-day series of dialogues at Y B Chavan Centre in Nariman Point. 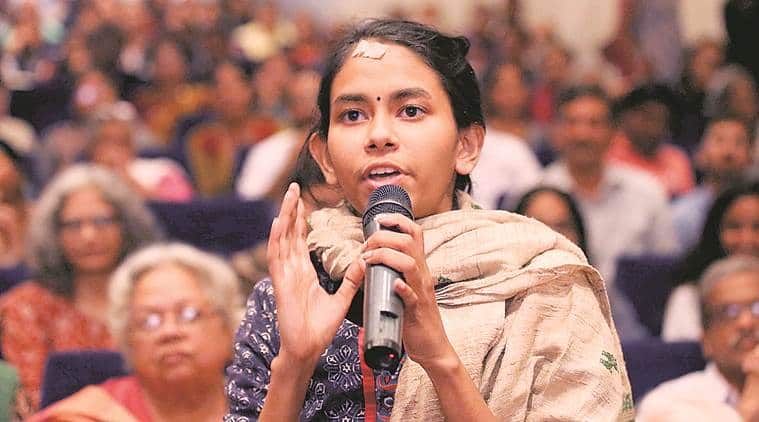 Being a good student does not just mean scoring 99 marks out of 100, but also learning to implement lessons from civics class, Ghosh said.

“Being a good student does not just mean scoring 99 marks out of 100, but also learning to implement lessons from civics class… There are students who fire pistols for the sake of a Hindu Rashtra. We need to decide what kind of students we want. Don’t wait for students to die before raising your voice,” she said.

Ghosh, who was attacked by masked persons on the central university campus on January 5, was speaking Saturday at a Mumbai Collective, an annual two-day-long series of dialogues at Y B Chavan Centre in Nariman Point. At least 35 people, including the JNU Students’ Union president, were injured in the violence. The Delhi Police has registered two FIRs against Ghosh and others for allegedly attacking security guards and vandalising a server room on January 4.

Ayesha Kader, general secretary of Tata Institute of Social Sciences Students’ Union said the central government was afraid of students. “This government fears students who think rationally and dissent. This is why all the violence has been directed against university spaces,” she said.

Jamia Millia Islamia student Afra Abubacker said anti-Citizenship (Amendment) Act protestors on the campus were always apprehensive of violence. “We never thought that someone would come with a pistol and shoot. With these continuous attacks, RSS terrorists are telling us that this is how they will terrorise us,” she said.

A teen shooter fired at an anti-CAA protest rally near Delhi’s Jamia Millia Islamia Thursday afternoon, injuring a student. The attacker waved his pistol, after firing a shot and shouted: “here’s your freedom”.

Abubacker added the continuous protests had taken a toll on both students and local residents in Delhi’s Jamia Nagar and Shaheen Bagh. “People have made a lot of sacrifices. Shops have remained closed for over 40 days. There is anxiety over how to sustain this,” she said.