Death of a Landscape 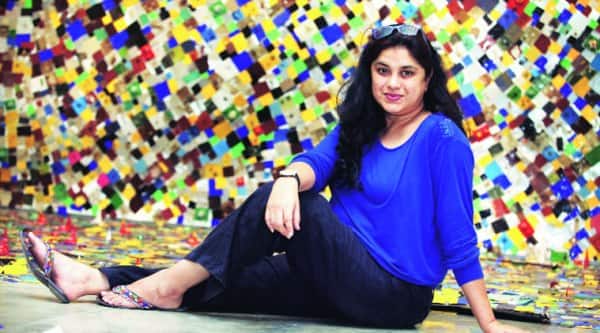 Hema Upadhyay with her installation based on Mumbai,
titled Modernisation

At the entrance of Chemould Prescott Road, an installation, Modernisation, is being assembled by artist Hema Upadhyay.
Sprawled across the entire left section of the gallery floor, the piece is an elaborate aerial view of Mumbai. The work is not a replica of the city but is unmistakably Mumbai. A sea of tarpaulin, aluminum and plastic can be seen in which mini churches, mosques and temples are trying to squeeze their way through, with an occasional flyover sneaking through this mix.

“Bombay never ceases to fascinate me. It was a city built for art,” says the Baroda-born, Mumbai-based Upadhyay. The installation has been inspired by the memory of the several bus rides she took to her grandmother’s house in Chembur. “I would stare at the expanse of Dharavi and it seemed like an artist was at work. The materials covering their houses provided a splash of colour that looked like abstract art. Everyday objects that surrounded these homes made it feel like an installation. The arrangement made me think of Arte Povera (an anti-art establishment movement in the 1960s that originated in Italy),” says the 42-year-old artist who had her first show at Gallery Chemould in 2001.

Her latest exhibition, “Fish in a Dead Landscape”, opening on September 23, is not a celebration of the city, rather a grieving. In one work she depicts the migration of flamingos near Sewri, but here birds are flying away from the city and not towards it. In another, she reimagines Japanese artist Hokusai’s The Great Wave, with great violent waves hitting the shore of Marine Drive — just like thousands of migrants pouring into the city each day.

Her muse, Mumbai, is a recurring motif, on which Upadhyay extrapolates the idea of a dying landscape. These are not just physical landscapes. Through paintings, mixed works and installations, the artist delves into landscapes of war-torn areas, places that are ecologically unstable and also explores the landscape of the mind.

One work shows the aftermath of a bombing. With iconic pictures of terror and conflict, such as the photo of the Mumbai riots of 1993 juxtaposed with those of the bombing of Haifa in Israel in 2003, “gives you the real picture of how a land deteriorates with war and man-made boundaries”. Another has a painting that shows Earth drawn from a red planet with hundreds of stamps from different countries (personally collected by the artist) floating in space. “All these countries that the stamps denote, float in space as one entity, devoid of boundaries,” says the artist.

There has always been an autobiographical element in Upadhyay’s works and this exhibition is no different. When she talks of the mind, she depicts it with a painting of a half-open drawer full of her personal belongings — clothes, watches, books and more. The name of the exhibition too, comes from an evening she spent at Carter Road. The artist was watching fisherfolk dry dead fish against the landscape. An picturesque setting was disrupted by the landscape itself. “It was made so filthy by civilisation that it made the dead fish seem lively against a rotting land,” she says.

Yet, in all this decay, the artist sees hope. A painting has birds picking at a knot in a rope. She explains, “I had a garden where I would hang plants from a rope. I would watch as birds would pick at the smallest strand of rope. They were destroying my rope, but taking it to build their own home.” Any disintegration comes with the hope of regeneration. “So while our landscape is dying, something beautiful might be on the brink of creation; this is why disintegration is so striking, almost beautiful,” she says.