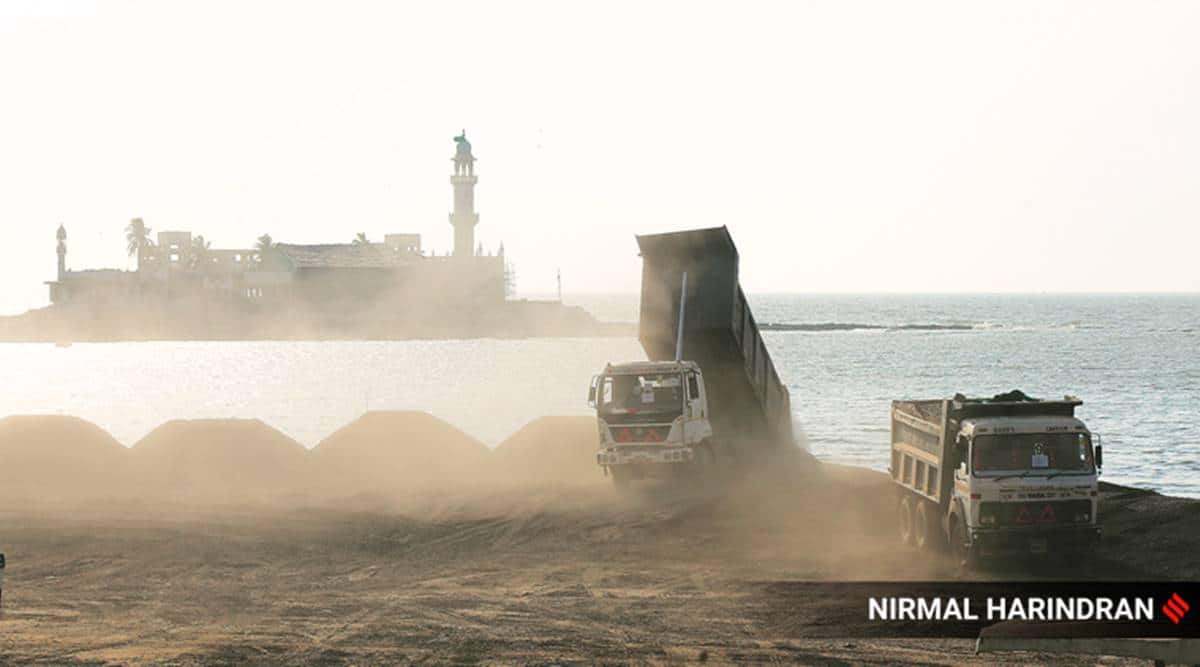 As it seeks to undertake additional reclamation in sea for the coastal road project, the length of the road is set to increase from 9.98 km to 10.58 km, the BMC told the Maharashtra Coastal Zone Management Authority (MCZMA) on Wednesday while seeking clearances for reclaiming an additional 21 hectare.

The total reclamation requirement for the project as per the BMC has gone up from 90 hectare to 111 hectare. The coastal road, from Princess Street Flyover at Marine Drive to Worli or south end of the Bandra-Worli Sea Link, is set to cost Rs 12,700 crore.

In a meeting with MCZMA officials, the BMC said the change in length is due to consideration of curvetures and minor differences in ramp positions. It added that the total area of the road that was falling under the Coastal Regulation Zone (CRZ) will also increase from 117.05 hectare to 134.42 hectare.

While seeking permission for additional reclamation, the BMC application listed 28 points for amendment in the CRZ clearance the project received in 2017. Of the 28, 24 proposed amendments are new and not part of the clearance application in 2017.

The BMC clarified that only 6.51 hectare will be additionally reclaimed, as the remaining 14.49 hectare required is for the sea wall, which was already a part of the project but “not detailed” or mentioned in the 2017 application seeking CRZ clearence. “The reclamation area appears to have increased by 14.49 ha. However, this area was there in the form of physical reclamation but not detailed (in the 2017 application),” the BMC said in its application while justifying reclamation for the sea wall.

The BMC has proposed to construct a 7.47-km sea wall along the proposed coastal road. The sea wall will provide an additional surface promenade of 11.66 hectare on the seaward side, it has stated. So far, it has reclaimed about 65 hectare.

However, environmentalists and activists opposing the multi-crore project have requested the MCZMA to refuse permission for additional reclamation. “We would like to remind the authority that granting post facto clearance has been prohibited by the Supreme Court. Already, BMC has violated CRZ clearance granted to it. We have pointed out the illegal reclamation of 4.25 hectare for the sea wall. The BMC itself had admitted in its affidavit before Supreme Court about starting work for the sea wall,” said Debi Goenka of Conservation Action Trust, who attended the meeting on Wednesday.

Goenka has submitted a 12-page letter to MCZMA highlighting the violations of the clearance granted to BMC. “I have requested the authority to conduct a detailed site visit in the presence of representatives of all petitioners so that violations and facts can be verified,” he said.

Activist Shweta Wagh pointed out that since the BMC is now proposing changes in its original plan and there is additional reclamation, it should come up with a comprehensive plan. “The sea wall was not part of the original plan for which CRZ clearance was granted. This additional work amounts to a change in the project profile. So, the BMC should make a fresh application for clearance,” she added.

Activists say the additional reclamation would impact marine biodiversity and also have an effect on fishing areas in the vicinity. The CRZ clearance granted for the project in May 2017 was for only 90 hectare. A study by National Institute of Oceanography to find out the project’s impact on waves, high tide line and seashore was also conducted on an area of 90 hectare. Residents have pointed out that since there is a change in the original plan, BMC should again go for public consultation.