Bread supply during lockdown: Smooth now, but tough times ahead if raw material dries up

Distributors across the city said the delivery of bread to stores was risky and chaotic in the first two days of the lockdown. 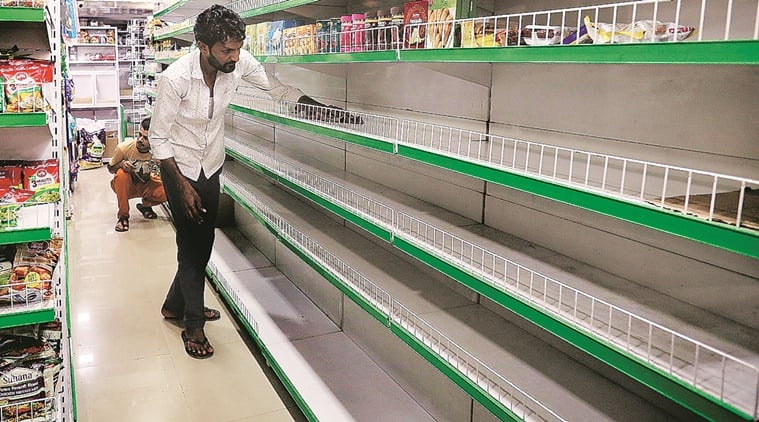 A departmental store, which has almost run out of stock, at Navi Mumbai. (Express photo by Amit Chakravarty)

THE MUMBAIKAR’S daily supply of bread has not yet been affected by the lockdown, but the city’s largest producer of sliced bread warned of possible disruptions when manufacturers start running out of packaging material, including wrapping paper, much of which comes from outside Maharashtra.

“This is a matter of performing our duty. We need to feed people,” said Khodadad Irani, the owner of Western India Bakers Pvt Ltd (Wibs), which controls 90 per cent of the city’s market for sliced bread.

Four factories of Wibs in the city have been working non-stop even as all other industrial production in the country, except those essential for sustenance, has ground to a halt. “We are doing our best to ensure that the supply of bread is not interrupted and are running to our full capacity,” Irani said. Thus far, Wibs has not slowed down its rate of producing 3,000 loaves per hour.

Irani’s employees live next door to the factories and do not require a commute to work. But he said he was worried that he may be putting them at risk by sending them to work every day.

The bread-maker warned that production was, however, dependent on wrapping paper that arrives from factories outside the state, most of which were shut down as part of efforts to prevent the spread of coronavirus, or due to en masse departure of migrant workers, who want to go back to their villages.

“When the arrival of packaging material begins to dry up in a week or so, we will face problems,” Irani said.

Distributors across the city said the delivery of bread to stores was risky and chaotic in the first two days of the lockdown.

“Most of our delivery boys live in Dharavi. They were initially not being allowed by police to leave their homes. So everything from picking up bread from the factories to delivering it to shops was late. Shopkeepers were anxious,” a distributor said.

It was only on Wednesday that police in Maharashtra began to issue curfew passes to individuals engaged in vital services and ensuring that supply chains did not break. “After the manufacturer issued identification cards and letters to our delivery boys, we have not faced any harassment from police,” added the distributor.

Many of Wibs’ 50-odd distributors in Mumbai expect manufacturing to slow down eventually in the absence of ancillary industries. “For now, the supply has not been affected. But after a point, the supply of raw material will slow down. We are not sure what will happen after a few days, especially since people are stocking up on bread and fear food scarcity,” another distributor said.

German state minister kills self due to ‘stress over coronavirus pandemic’