Between Life and Art

A unique light-and-sound installation in the city next month by four artistes invites audiences to be a part of it. 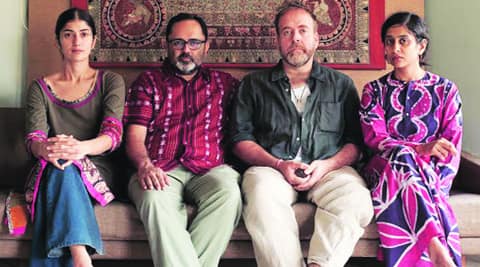 On April 10 and 11, if you walk into the darkened hall of KR Cama Oriental Institute in Kala Ghoda at 7 pm, you might find yourself next to a plant or maybe even a rock in an elaborate seating arrangement of intersecting circles. The otherworldliness of the place may be further accentuated by the sound of a musical note being played from a speaker at 528 hertz, the frequency of light during which photosynthesis takes place. Once inside that room, you will be one of the many “objects” in The Way of Light, an “experiential, immersive, sound and light, performative installation” by artistes Shumona Goel, Michael Northam, Tabasheer Zutshi and Avijit Mukul Kishore.

“A response to the restlessness of modern life”, this site-specific installation explores the theme “City Vs Nature”. The artistes see the citizen’s common yearning for a return to nature as a false idea. “Nature is not some peaceful idyllic space that offers a temporary reprieve from city life; nature can be violent too. We are offering a third space, here, which is a kind of hybrid between city and nature,” says Goel.
The venue was chosen for two factors. Firstly, it is in the city’s art district of Kala Ghoda, yet isn’t a gallery and is thus free of the transactional aspect of the art market. Secondly, as a centre for theosophy and home to a Zoroastrian library, it goes with the spirit of the project that has references to mysticism and rituals such as alchemy, freemasonry.

In keeping with this, the installation — the artistes will host multiple sessions during the day, each 45 minutes long and for a fresh set of audience — attempts to involve the viewer in a way that usual gallery-bound art practices don’t allow. “The viewers will become a participant and their reactions will decide how we improvise the performance,” says Zutshi, a Goa-based production and costume designer, who has worked in films, such as Miss Lovely and Tasher Desh. The four artistes will start setting up the installation on April 1. Bangalore-based Experimenta, an artist-run platform that supports experimentation with film and sound in India, is presenting the project.

To create a unique and “hypnotic” experience, the artists are “activating the space”. The elaborate set-up (artists’ sketch above) — complex seating pattern spread out over three bright blue Persian rugs, drapes resembling mosquito nets hanging from the ceiling, air fragrant with the scent of leaves, flowers and oils — has been painstakingly designed by the artistes so as to subliminally affect the viewer’s mind. The artistes themselves will participate in this “performance” by manipulating light and sound and moving about the objects. “It is as much a fine arts experience as therapeutic,” says Northam, an American sound artiste who draws from natural and found objects to create intricate soundscapes. He shows a mushroom picked from Borivali National Park that he has tweaked into a musical instrument that sounds like a person walking through a forest.

“It is not so much presenting a clever art piece as it is about creating a space that stimulates the participant to go through personal visionary experiences themselves, to the point that they may be inspired enough to explore the artist in themselves, perhaps write their own story or poem,” says the Oregon-based artiste, who calls the experience “sonic massaging”, a kind of sound therapy.

The artistes have been holding trial sessions at Goel’s residence every week where they invite friends to experience aspects of the performance. “The reactions are varied — sometimes they just sleep off and at other times they spoke of memories from their subconscious, brought to the fore after experiencing the session,” says Goel, a Mumbai-based experimental filmmaker who has
previously worked on site-specific installations that “transform physical spaces into immersive sound-and-light environments”.

The Way of Light pushes the envelope in terms of use of film and sound. “Unlike cinema, where sound and light are merely technical devices in the storytelling, these elements will play lead characters in the installation. For instance, in the stark dark installation space, how the objects reveal themselves to the audience will depend on the lighting,”says Mukul, a city-based cinematographer and filmmaker whose latest film, To Let the World In (2013), chronicles the history of contemporary Indian art.

The unique viewing arrangement—a free event—is more like a movie-going ritual than an art-viewing exercise. “This harks back to Expanded Cinema, an experimental video art practice in the ’60s in Europe and America, that tried to break the boundary between life and art,” says Goel.

Years after Udaan, Kanchan on the ground with voters