Athletes from Ladakh sweat it out for Mumbai Marathon

Recalling her first tryst with running, Tshi Ladol (18) speaks of how when none of her classmates were ready to take part in the school marathon, her teacher compelled her to run. 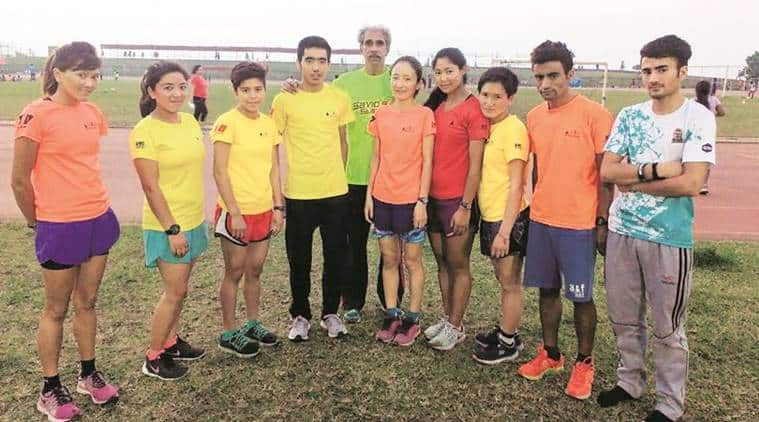 The nine athletes had stood out with their performance in the Ladakh Marathon in September, which helped them qualify for the annual event in Mumbai. (Express Photo)

As the sun sets at Priyadarshini Park, nine young athletes hailing from Ladakh, their ages ranging from 18 to 24, put their best foot forward as they run laps along the jogging track and sweat it out. Sitting alongside on the lush green grass is their coach and a former Indian national marathon champion, Savio D’Souza (60). And his eyes light up as he sets the pace for the group consisting of three boys and six girls with hand gestures. The Mumbai Marathon is scheduled for Sunday, January 21.

All nine of them had previously stood out with their performance in the Ladakh Marathon held in September, notching the top three spots, which helped them qualify for the annual event in Mumbai where they would be participating in various race categories – Full Marathon Elite, Full Marathon Amateur and Half Marathon.

“As a child, I always loved the thrill of running and as I grew up I got inspired to take it up as my career after watching the film ‘Bhag Milkha Bhag’ in 2013. I got my opportunity last year, when I participated in the Ladakh Marathon and came second,” says Khadin Hussain (19), excited about his Mumbai Marathon debut.

The Ladakh Marathon has been held annually since 2012, and is one of the toughest marathons in the country due to the altitude. The participants end up running the 42 km at an elevation of 3,500m above sea level. And like Hussain and his fellow runners here, the athletes who achieve the first three positions are sponsored by the promoters to train and run for the Mumbai Marathon. “At home whenever I was told to buy something and come from the market, I always had a habit to run and get it,” says Tsetan Dolkar (24), doing her third year in Arts and preparing for her sixth appearance at the Mumbai Marathon.

“First time in 2012 when I ran, my timing was 4 hours 49 minutes and I worked on it and improved my timing last year to 3 hours 14 minutes,” she adds. In her bid to reduce her finish time, she has been waking up at 5.30 am for the past two years. “After running I used to help out in the house work, and then again in the evening run for around an hour,” says Dolkar. In the past, she would continue training 10 days before a marathon, a routine that she now avoids.

Recalling her first tryst with running, Tshi Ladol (18) speaks of how when none of her classmates were ready to take part in the school marathon, her teacher compelled her to run. “To my utter surprise, I came first and then started developing an interest in running and subsequently never left it,” says Ladol.

The very next year, Ladol qualified for the state level competition for 100 m and 800 m, and then got selected at the national level where she came in 6th. Presently studying science in 12th, she has managed to balance her studies and running by sticking to a schedule designed by D’Souza for all nine Ladakh athletes.

To avoid practicing during the chilly Ladakh atmosphere, the athletes start their running practice only after the sun rises and before it sets in the evening. “I first started training them four years ago in 2012, and since then have got acquainted to each one of them pretty well. I visit them in July to monitor their practice, because some of them are students and have their exams due to which they can’t make it to Mumbai,” says D’Souza.

Having practiced for the past month, and having faced tough competitions before, the youngsters from Ladakh hope to better their best timings at the event. As for D’Souza, his role pretty much ends as soon as his trainees take their position at the start line. And his advice to them is rather straightforward. “‘Judge the race, then run, and come what may, complete it’.”