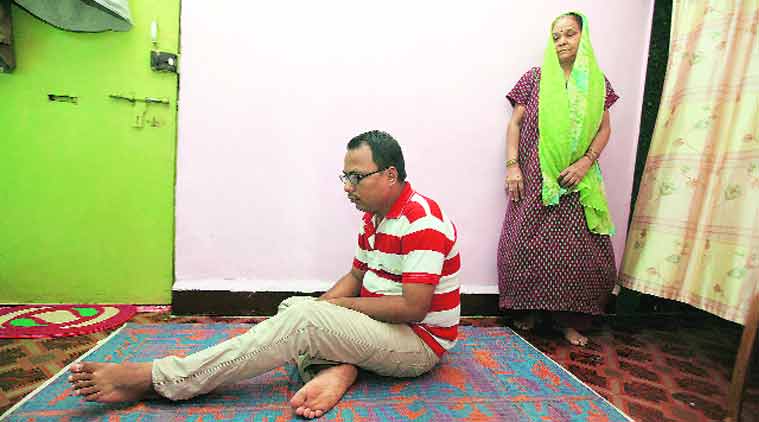 Govind and his mother at their Thane flat. (Source: Express photo by Deepak Joshi)

What he first confused as wedding crackers going off turned out to be a two-day-long terror siege that destroyed the life of Govind Singh Kathayat, who worked as an accounts manager in Busabong restaurant, nestled right behind the Taj Mahal Hotel.

Little did his parents realise that the 26/11 episode could trigger life-changing mental ailment schizophrenia for Govind, who was 30 at the time.

Schizophrenia, a brain disorder, can lead to abnormal social behaviour or to hallucinations and inhibitions.

Newsline first spotted Govind in the state-run Thane Mental Hospital in August this year. Standing alone, he was making silver foil plates as part of occupational therapy. Stooping low, head shaved, and with a deliberate attempt to avoid eye contact, he mumbled, “I am getting treated for depression. I get horrible dreams post the attacks.”

Since November 28, 2008, the day Govind was rescued, he has been admitted to the mental hospital eight times. “Every time he is discharged, we hope that’s the last time, but the depression always returns,” his father Kundan Kathayat says. In November last year, before the 26/11 anniversary, his wife Rama divorced him after his state of  depression led to him being jobless.

Govind, now discharged from the mental hospital and perched on the tip of his bed in his parents’ flat at Majiwada, looks up at the ceiling of their 1BHK house and the memories return vividly: “It was after 9 pm. There were around 30 people including four managers when the first rounds were fired. We first thought it was a wedding procession but when the TV blared the news, we locked ourselves inside the lounge and looked at the magnificent hotel through the windows. I saw the dome go up in flames shortly afterwards.”

The gunshots were audible, so were the screams for help the entire night.

Govind lived in fear of death for two days in his office, expecting a knock on his door every second. While he was physically rescued on November 28, he could never be rescued mentally from his  nightmares. “He went into depression and had headaches since that day. We thought he was in shock initially. It continued for next two years and our relatives even suggested to take him to a baba to ward off evil spirits. After nothing helped, we sought medical advice and schizophrenia was diagnosed,” says his father, who  retired as an engineer in the Indian Navy.

Psychiatrist Dr Harish Shetty said, “Terror attacks are catastrophes that human mind is not prepared for. It can, on occasions, act as a trigger for mental problems or depression in this case.”

Govind has not seen his 10-year-old son Rajeev for five years now. The attacks and the waves of fits was reason enough for his wife to keep the child away. “He attempted suicide twice. Once he mixed Begone spray in whiskey and the other time he slit his wrists,” Govind’s mother Bhagirathi says.

The execution of Ajmal Kasab in 2012 did little to end his phobia. “Ab na body saath deta hai na mind (Neither my body nor my brain works now),” he says, adding, “I remember fire in front of us. I spoke to my wife over phone, but I could not assure her that I would return alive. The episode triggered fear and sadness which has never left
me since.”

Govind’s treatment comprises shock therapy, evident through scars on the sides of his forehead, and everyone at the hospital recognises him as a regular visitor of Ward 19 now. “Bohut hoshiyaar hai par dekho kya ho gaya iska (he is intelligent but look what his state is now),” ward boy Ganesh Shede comments point at Govind.

Discharged for two months now and ready to start afresh, Govind has applied in several companies for a job, something he does after every hospital discharge. “When he goes out, he loses confidence and cannot speak. We can only hope he gets a job and comes out of this problem. We are surviving on my pension,” Govind’s father says.