Terrified after their children picked up empty liquor bottles and plastic waste on the Bhuigaon beach in Vasai, Ferrao and her Indian husband Lisbon took it upon them to clean the beaches in the area. 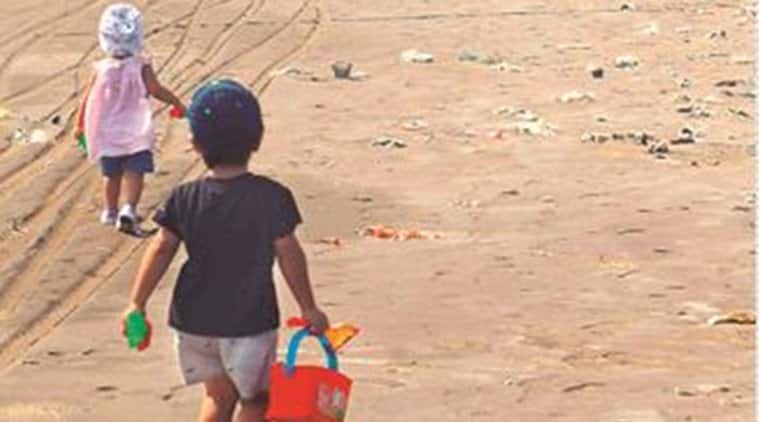 The Ferrao family has taken up cudgel for cleaning the Bhuigaon beach. (Express)

While the Versova beach clean-up that has been underway for 130 weeks may have inspired many in the city to be a part of the drive, further north in Vasai, a similar clean-up drive has been taking shape for a year at the Bhuigaon beach with Hungarian national Zsuzsanna Ferrao (43) and her husband Lisbon Ferrao (43) at the helm. Terrified after their children picked up empty liquor bottles and plastic waste on the Bhuigaon beach in Vasai, Ferrao and her Indian husband Lisbon took it upon them to clean the beaches in the area. It was February 2017, when the Ferraos and their two children started cleaning the beaches. The couple has never looked back since.

The couple was soon joined by other residents of Vasai and the ‘clean Vasai beaches’ campaign took off within a few months. Dedicating at least three hours for beach cleaning every Sunday, the group claims it collects more than 200-250 kg of waste. Zsuzsanna (43) said, “We visited beaches like Bhuigaon and Rangaon every week with our kids to play. On several occasions I saw my kids playing with plastic trash on the beach and picked up liquor bottles. It was not possible to play freely with my kids with so much waste lying around. So in February 2017 we decided to clear as much garbage as we could. We posted pictures of our little effort and urged people to join us. We immediately started getting support from many Vasaikars.”

While Zsuzsanna cleans up the beach, Lisbon looks after son Lucius (4) and daughter Nascha (2) who play and sometimes help the group in the clean-up. “To keep ourselves healthy, it is important to keep our surroundings and environment clean. We hope people support us in whichever way they can. We were lucky to have got to play on clean and pristine beaches in our childhood. This is not just for our kids but others too who want to visit the beaches,” said Lisbon (43).

Concesao D’Costa, a physiotherapist and Vasai resident, said she and her husband Rodney Colaco had been planning to start a beach clean-up campaign along with their group of friends, however a photo of Zsuzsanna cleaning the beach along with her kids on social media prompted them to join her in cleaning the beaches. “Every Sunday morning or evening, interested people get together at Bhuigoan beach to clear out trash, including plastic, Styrofoam plates and liquor bottles,” said Concesao. She added that after the first clean-up episode, she and Zsuzsanna discussed further plans and that is how the Clean Vasai beach campaign started.

Another volunteer said Vasai beaches are a popular weekend destination, but visitors do not clean up after partying, especially liquor and pet bottles, Styrofoam plates. “So many people visit the beach on a Sunday and most of them litter as we clean up. But there are a few who join us. We talk to visitors and try to create awareness, even show them where the dustbins are, but people who litter just leave it on the beach. However, this won’t deter us. We need to look after our beaches and the environment,” said Ronald D’Cruz, a businessman and a group member.
The group wants more volunteers to join the campaign, as it wants to make every beach in Vasai litter-free. According to D’Cruz, the group has managed to clear over 500 tonnes of garbage till date. However, they plan to increase the pace in future. “After collecting the trash, we call the municipal corporation that sends its staff to clear the bags of garbage we collect,” added D’Cruz.

Satish Lokhande, commissioner, Vasai Virar City Municipal Corporation (VVCMC), said, “The clean-up initiative by the locals is very helpful. Treating waste at individual level is one thing, but cleaning your surroundings on your own to save the environment is something that needs to be replicated across the country. It is good to see that a full-fledged beach clean-up drive is going on in Vasai. We will provide whatever support the group needs.”