They are investigating if Shariq received help for his activities, with four people being taken into custody for questioning. 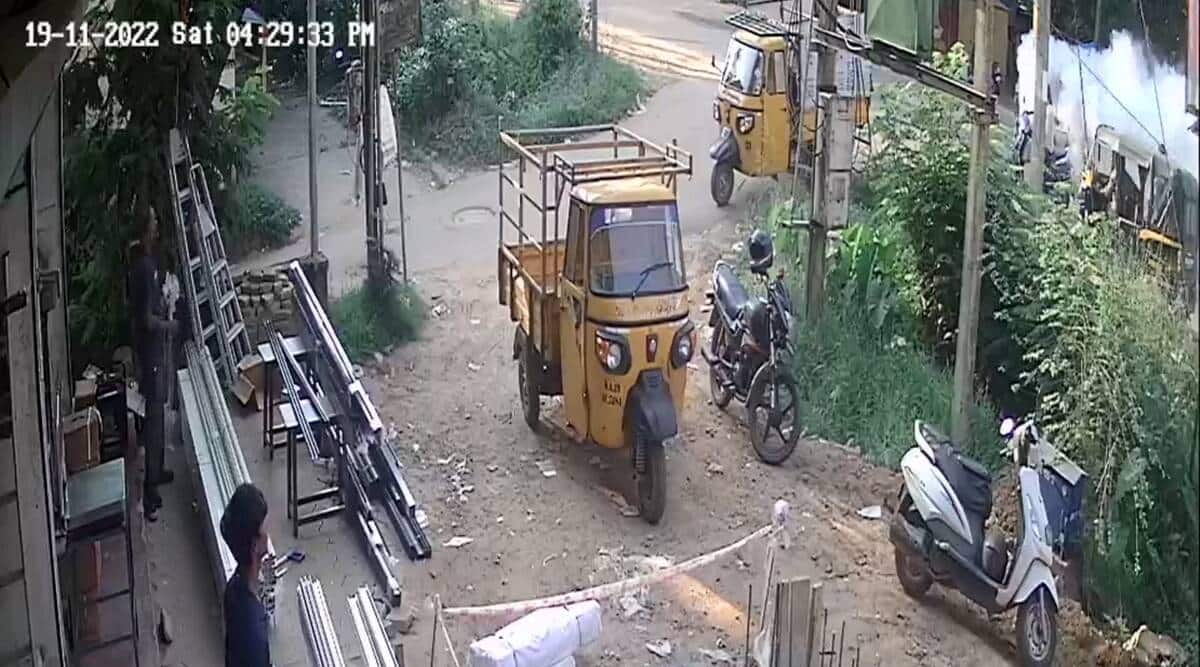 Smoke rises (on extreme right) after an autorickshaw on a street, as seen from a CCTV camera from a nearby area, in Mangaluru city. (PTI)

Mohammed Shariq, 24, who was arrested in the Mangaluru autorickshaw blast case, was inspired by global terror groups and had planned more explosions, police said Monday.

They are investigating if Shariq received help for his activities, with four people being taken into custody for questioning. More arrests are likely, said sources.
Police also said the improvised explosive device (IED), which exploded prematurely in the autorickshaw on Saturday, was likely built by “inexperienced persons”.

Shariq is an accused in two separate terrorism-linked cases in Karnataka. He is wanted in a terror case registered in Shivamogga in September for alleged links to the Islamic State (ISIS) and was arrested in 2020 for painting “anti-national” graffiti on a wall in Mangaluru. He was out on bail.

Alok Kumar, Additional Director General of Police (Law and Order), said at a press conference that Shariq had evaded police scrutiny since August 20 and travelled to parts of Tamil Nadu and Kerala before returning to Mysuru in Karnataka on September 20. He had rented a house in Lokanayak Nagar in Metagalli Police Station limits and enrolled for a mobile repair course in the city. “He was inspired by terror outfits with a global presence… We have evidence that he was preparing to carry out more blasts,” he said.

On whether the accused is linked to October’s Coimbatore blast, Kumar said Karnataka Police were in touch with their counterparts in Tamil Nadu. “As of now there is no credible evidence about his role (in the Coimbatore blasts),” he said.

“We had suspected that it was Shariq since the blast. However, since there was a difference between his old photo and his face after the blast, we convinced his family members to help identify him,” Kumar said. Two members of his family, who arrived in Mangaluru from his hometown of Shivamogga, identified Shariq on Monday.

Shariq will be booked under the provisions of Unlawful Activities Prevention Act (UAPA) and multiple sections of Indian Penal Code, including those for forging documents and impersonation.
The authorities raided a house rented by Shariq in Mysuru and found 150 match boxes, phosphorous, sulphur, battery, nuts, bolts and circuits — all bomb-making material.

Police identified the main explosive material used in the IED as around 500 grams of gunpowder — which has potassium nitrate as its main chemical and is easily available for purchase.

The filaments of two 12-watt electric bulbs were the detonators, which were connected to a printed circuit board timer and three 9-volt batteries, the investigations have found.

The heating of the bulb filaments, that were kept in contact with the gunpowder, was to trigger the blast of the IED, kept in a pressure cooker. The triggering of the device occurred prematurely resulting in its explosion in the autorickshaw, police sources said.

In September, Shivamogga Police arrested two of his Shariq’s associates — Maaz Ahmed and Syed Yasin, both engineers — in a UAPA case. Shariq was reported as absconding when his associates were arrested.

Police have not revealed the identity of the four detained people. Kumar said that two were held in Shivamogga and one in Ooty, Tamil Nadu. The remaining one was held in Bengaluru on Sunday and handed over to Mangaluru Police on Monday. Police are questioning one individual in Gadag whose Aadhaar card was used by Shariq to buy a SIM card.

Searches were carried out in connection with the case in seven locations across Shivamogga, Mangaluru and Mysuru.

Kumar said Shariq had travelled to Mangaluru from Mysuru via Madikeri by bus ahead of the blast on November 19.

He had also visited the city on November 10 to recce the city and identify locations he could plant the IED.

Police suspect that Arafat Ali, who along with Shariq was among the accused in the Mangaluru graffiti case, was his immediate handler for the activities. Ali is suspected to be in Dubai, Kumar said.

Police sources said Shariq had links with Mateen Ahmed Taha, who is said to be a member of ‘Al Hind ISIS’ which managed the terror outfit’s activities in Karnataka. Mateen also hails from Shivamogga and the National Investigation Agency (NIA) announced a reward of Rs 3 lakh in 2020 for information leading to the arrest of the suspected terrorist.