The couple was allegedly told to leave the village by Sarpanch Hakam Singh and girl’s family (excluding her father) who did not approve of the marriage on April 29 when they came to meet their families. 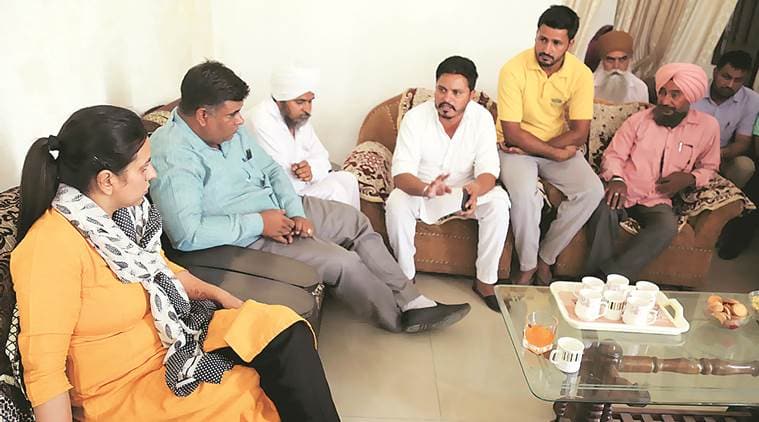 BDPO Navdeep Kaur (left) holds a meeting with Sarpanch Hakam Singh (fourth from left) and other members of the panchayat at Chankoian Khurd in Ludhiana. Gurmeet Singh

Five days after a resolution passed by village elders, including the sarpanch, two panches and the gurdwara committee head, in Chankoian Khurd of Doraha in Ludhiana called for boycott of couples who do a “love marriage”, the controversial resolution was rolled back after police and block development and panchayat officer (BDPO) visited the village.

This resolution was passed on April 29 after a 21-year-old boy married a 19-year-old girl at a gurdwara and in a court in Ludhiana on April 18. The couple was allegedly told to leave the village by Sarpanch Hakam Singh and girl’s family (excluding her father) who did not approve of the marriage on April 29 when they came to meet their families.
However, BDPO Navdeep Kaur claimed that since resolution was never registered in panchayat’s official proceedings, it was ‘illegal’. “We have counselled the village panchayat today as their decision was wrong. I condemn this act of panchayat. However, they have announced its rollback.. The couple will be provided security,” she said.

On Thursday, as The Indian Express visited the village, copies of the ‘resolution’ signed by sarpanch and some other village elders were pasted at village bus shelter (adda), village chowk, dairies and so on. “Boys and girls who will get married at their own will be socially boycotted. Those villagers will also be socially boycotted who will talk to such couples. Shopkeepers also cannot sell any goods to such couples. Neither they will get any facilities from panchayat, nor the right to use common land,” read the resolution carrying official stamps of the sarpanch, two panches and the gurdwara committee head.

Jagtar Singh, father of the boy, said he never had any problem with the marriage. “We are ready to accept them. Even that day we had no problem. Girl’s family was not ready and after they complained to sarpanch, my son and his wife were asked to leave,” he added. Girl’s grandfather, Shingara Singh, who had threatened to immolate himself said that “he had problem with a girl and boy living in neighborhood like brother and sister since childhood getting married”, but now he was “ready to accept” them. Girl’s father, Prithpal Singh, said that he too never had problem with couple but it was the “panchayat that asked couple to leave the village”.

Meanwhile, sarpanch Hakam Singh claimed: “We are not against love marriages. We had to pass this resolution just to control the situation that day as girl’s grandfather said he will immolate himself if girl and boy continue to live in village. They got married in a court and when they came home, families were furious. So, just to control the situation we wrote this and signed. This resolution has not been entered in panchayat proceedings so it is unofficial. We pasted it at some places so that others do not follow same path.” He added: “We will remove the copies of resolution pasted at some points in village. We are rolling it back.”

Swati Tiwana, SDM (Payal) said, “Panchayat will be giving a revised written statement tomorrow that their earlier statement was wrong and that they condemn it. It was not a resolution as it was never recorded in proceedings. If couple faces any problem when they come back, they will be given security by administration.”

Why is May 4 known as Star Wars day?