The pro-Punjabiyat activists in Pakistan have now planned an array of activities for the day which would include folk music, dances, food, poetry, literary discussions among others. 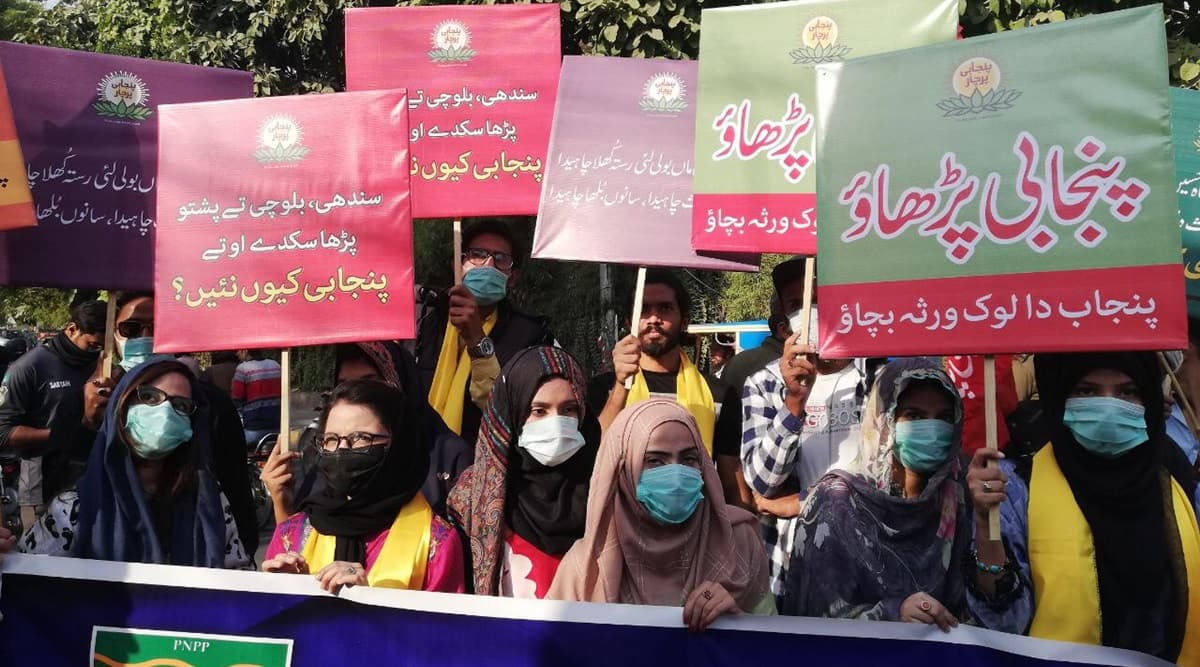 During one of the protests in Pakistan. (Express photo)

The government of Punjab province (Lehenda Punjab) in Pakistan will celebrate March 14 as “Punjab Culture Day” with officials being told to wear turbans a day before the celebrations and post pictures on social media.

The order, the first of its kind, issued by section officer (culture), Government of Punjab, (copy with The Indian Express), read, ‘..Government of Punjab is going to celebrate the first ever Punjab Culture Day on 14.03.2021… It has been decided that all Divisional Commissioners, Regional Police Officers, Deputy Commissioners and District Police Officers in Punjab shall wear traditional Punjabi turban on 13.03. 2021 and post their pictures on their respective official web pages as well as on social media to create hype for celebration of Punjab Culture 14.03.2021..’

The order, issued through information and culture department, also mentions that a special committee was constituted by the Chief Minister, Punjab to make arrangements for celebrations and a ‘meeting was held under the convenership of Minister of Culture, Punjab and Additional Chief Secretary Punjab on 5.03.21’ where it was decided that all government officials in Punjab will wear traditional Punjabi turbans on March 13.

The order is being hailed as a significant victory by the activists who have been protesting in Pakistan since months demanding that Punjabi language be made a compulsory subject in schools and that it should also be offered as medium of instruction. Massive protests have been held in Lahore in past months when activists from all faiths and backgrounds gathered wearing Punjabi attires demanding a stature for Punjabi language at par with Urdu and freedom to hold programmes depicting Punjabi culture and Punjabiyat.

One such massive protest was held on February 21 (International Mother Language Day) in Lahore where activists protested with placards, which had slogans such as ‘Maa boli Punjab da haq, saada Hhaq aithe rakh.’

The pro-Punjabiyat activists in Pakistan have now planned an array of activities for the day which would include folk music, dances, food, poetry, literary discussions among others.

Speaking to The Indian Express over phone, Ahmad Raza Wattoo, from the organization ‘Punjabi Prachaar’ in Lahore, said that the ‘first victory’ has come after a long battle. “For the people living in Punjab, it is not about being a Hindu, Muslim, Sikh etc. We all are Punjabis first and we demand that Punjabi language should be a compulsory subject in schools of Pakistan, at least in Punjab province. And ideally, not just schools but also till graduation in colleges. We held several protests demanding that Punjabi culture and language be given its rightful stature and place that it deserves. Nearly every person who lives in Punjab understands Punjabi but still it is the Urdu that dominates here. We are demanding equal rights for Punjabi as other languages. We can’t let our language die. Earlier we used to organize small programmes to promote Punjabi but it is for the first time that an official order has come from the government and they have recognized a day dedicated to Punjabi culture.”

Shahid Shabbir, a historian working on Sikh history in Pakistan, said that a language cannot be allowed to die in a country and their struggle will continue till Punjabi isn’t made a compulsory subject in schools in Punjab province. “If singers like Gurdas Mann, Sukhwinder Singh, Sardool Sikander etc are the heartbeats of the Punjabis on Pakistan side too, it means that heart of Punjabi is the same wherever it beats – be it India or Pakistan. One of our ministers had passed a very derogatory remark against Punjabis a few months back and we held a massive protest against it. The protests continued in Lahore because government is still not teaching Punjabi in schools here. The order to celebrate March 14 as Punjab Culture Day is a significant victory for us. In our protests, persons from every faith including Hinduism, Islam, and Sufism etc had participated because we are Punjabis first.”

An array of activities that are scheduled to be held on Mall Road, Lahore on March 14 include Punjabi folk dances bhangra and giddha, jhumar, folk music such as tappey etc, food stalls, handicrafts, Punjabi poetry & literary discussions, dhol etc. Shabbir said that Punjabi food and drinks such as makki ki roti, lassi, saag, chhole bhaturey, kaanji would be served and some organizations are also planning to hold langar on the day.

Welcoming the move, Ihsan Nadiem Goraya, editor of the magazine ‘Punjab De Rang’ which is published both in Gurmukhi and Shahmukhi Punjabi from Lahore, said, “So many dialects of Punjabi are spoken in India and Pakistan…this language deserves much more. Punjabis should not let their language die.”