Titled ‘The billboard that breathes’, these lungs have been installed on the footpath outside BCM Arya Model Sr Sec School, Shastri Nagar, in presence of experts and residents of the area. 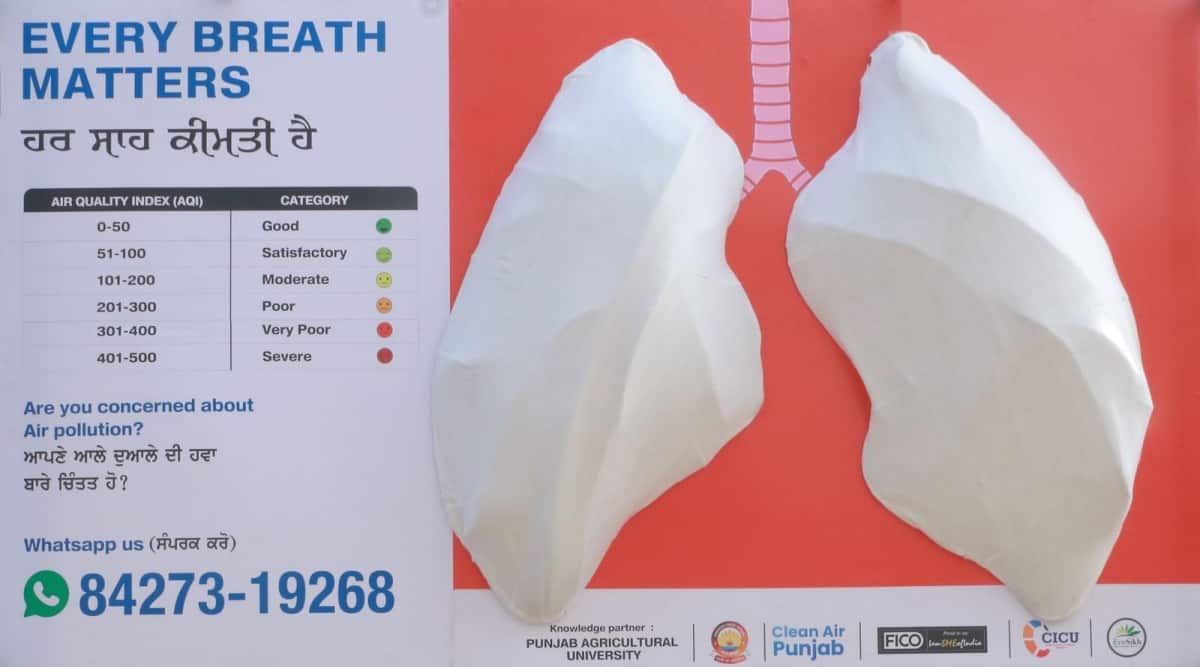 The scientist stated that educating the public about AQI is the first step to build awareness on air pollution and its health impacts. (Express Photo)

Do you worry about the quality of the air you breathe in while moving around in Ludhiana? If yes, then an art installation will soon come to your aid.

In a first-of-its-kind initiative in Ludhiana, an interactive art installation consisting of giant-sized faux lungs will demonstrate and create public awareness on the health impact of breathing in polluted air.

Titled ‘The billboard that breathes’, these lungs have been installed on the footpath outside BCM Arya Model Sr Sec School, Shastri Nagar, in presence of experts and residents of the area.

The awareness drive has been organised by EcoSikh in collaboration with Clean Air Punjab — a citizen’s collective working on the issue of air pollution — and supported by Punjab Agricultural University (PAU) as knowledge partners.

How does the ‘billboard that breathes’ work

The chalk-white lungs have been created using HEPA (High Efficiency Particulate Air) filters. The same filters are used inside the operation theatres, anti-pollution masks and other places to trap dust. The lungs have also been fitted with fans that will suck in air to mimic the functioning of lungs while breathing.

Over the next few days, the particulate matter from dust pollution and vehicular emissions will start getting trapped in the HEPA filters. This will lead to the lungs changing colour — from chalk-white to brown to black.

Not only does air pollution contribute to climate change, it also has a negative influence on public and individual health due to increasing illnesses and deaths. Dr Akashdeep, Senior Pulmonologist, DMC Ludhiana, said, “Air pollution causes lung cancer, cardiovascular events, central nervous system dysfunctions and skin diseases, as well as respiratory disorders such as Chronic Obstructive Pulmonary Disease (COPD), Asthma and Bronchiolitis. The way pollution levels are rising every day, we are in a health emergency.”

Advertisement
‘The billboard that breathes’, these lungs have been installed on the footpath outside BCM Arya Model Sr Sec School, Shastri Nagar, in presence of experts and residents of the area. (Express Photo)

Gagnish Singh Khurana, an environmentalist, shared that this billboard will increase the conscious participation of the citizens, NGOs and the government machinery of the city.

“The primary objective is to create a model of awareness among the citizens of the city and other stakeholders. Time has come when we should vigilantly observe the Air Quality Index (AQI) just like we check the weather through the mobile phone apps,” Khurana said.

As per Ludhiana Clean Air Action Plan, four Continuous Ambient Air Quality Monitoring Station (CAAQMS) were to be installed in Ludhiana at various locations by March 31, 2020 to measure the average Air Quality Index (AQI) but they are yet to be installed.

“Citizen participation is essential to achieve clean air as we all require access to healthy air to live. This fact alone makes it necessary for each and every one of us to diligently monitor the state of the air quality. The billboard serves as a reminder to reflect, act and modify our lifestyles,” said Supreet Kaur, president of EcoSikh. Kaur added they will plan campaigns around the billboard to ensure the message reaches across Ludhiana.

Environment Manager of BCM Arya, Vipra Kale, said “The deteriorating air quality is due to anthropogenic reasons and there is a need to inform the community about the growing disasters causing climate change which will affect the generations to come.”

Senior scientist Dr Prabhjyot Kaur said Punjab is mostly a green state with approximately 83 per cent of its land used for agriculture and despite this, Punjab’s AQI is high.

The scientist added, “The air quality index in most of the places fall in the poor and very poor categories. Educating the public about AQI is the first step to build awareness on air pollution and its health impacts. Together, we must cut emissions and also educate the public about the benefits that reductions in emissions can have on an individual level.”

According to Dr Prabhjyot Kaur, the billboard campaign will help build awareness among people as now there will be a visual representation of how serious the air pollution crisis is in the city.