Aggar Nagar society at loggerheads with MC over garbage collection

Residents are fearing the worst with monsoon arriving and animals creating a menace throughout the place. 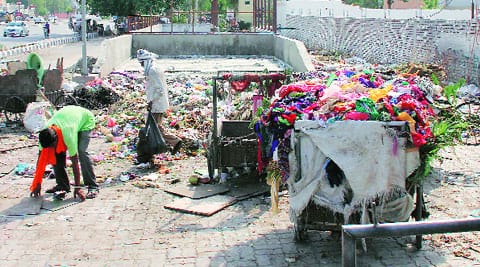 Aggar Nagar society on main Ferozepur road used to ferry its garbage to the dump made by Municipal Corporation near Punjab Agricultural University. However since the government’s project to widen the Ferozepur road has taken off, MC in clear words has told colony to ‘find its own dumping ground’.

The Ludhiana Aggarwala Co-operative House Building Society, managing the colony too not taking any pain to find a suitable place for dumping the garbage, has ordered the sweepers to throw it in front of the gate. However, with a war going on between MC and Aggar Nagar society, residents are fearing the worst with monsoon arriving and animals creating a menace throughout the place.

Not only this, even A2Z company, hired by MC for lifting the garbage, is not sending the pick up van regularly to pick the garbage from the colony. Harried to the core, Pankaj Jindal, a resident told Newsline, “We are living in Aggar Nagar since more than 30 years. It is one of the poshest locality in Ludhiana and never before garbage has been dumped at entrance of the colony. Monsoons are arriving and this is going to create a lot of problems.”

An eyesore for the residents and guests, even society sweepers are now haphazardly throwing garbage and placing their carts even in space near dump literally stretching the dump till the main road.

“For 24-hours one can see garbage lying in front of Aggar Nagar. Foul smell emits whenever one crosses the gate. There used to be a temple there and now it has been shifted which has made the matters worst,” said Sangeeta Garg, a resident.

Krishan Kumar, manager of the society said, “We have no space to dump garbage inside the colony and MC has told us to create our own dump. We are in conversation with A2Z to arrange door-to-door garbage collection for us but they are yet to send us a proposal.” A S Sekhon, in-charge heath wing, MC said, “Society has to create dump of its own. We will ensure that A2Z sends pick-up van regularly.”