Addressing a large gathering of women in Prayagraj in the run-up to the UP Assembly polls, Modi said the country was witnessing the work being done for women empowerment in the state. 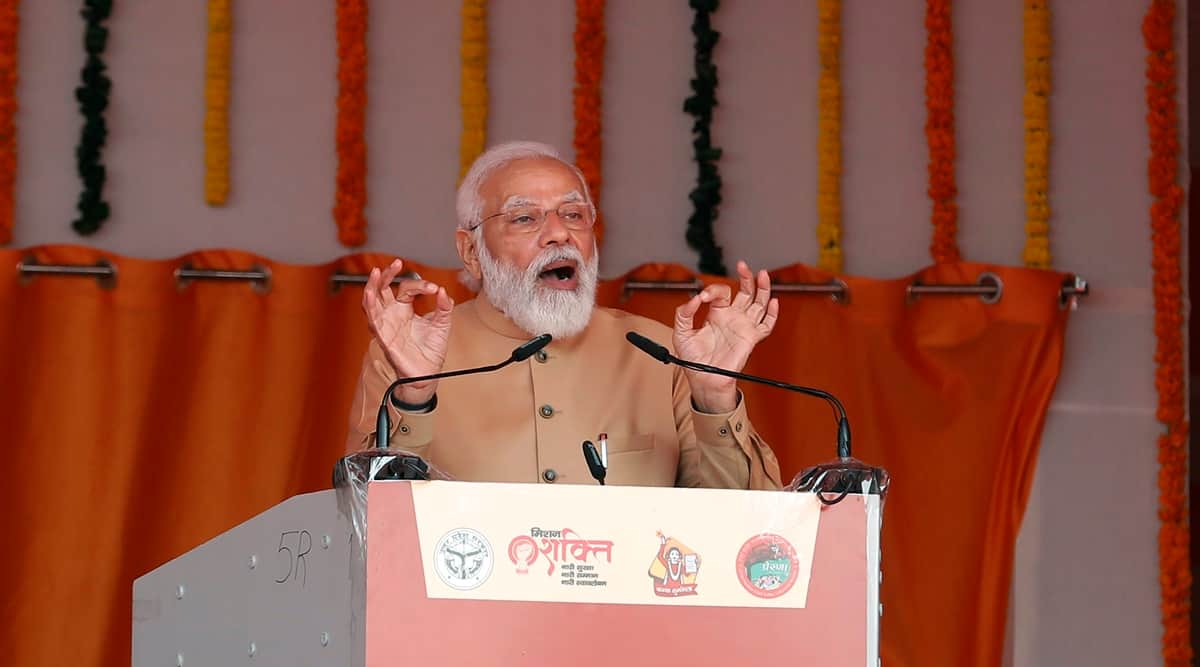 Highlighting his government’s recent decision to raise the legal age of marriage for girls from 18 to 21 years, Prime Minister Narendra Modi today took on his political rivals for criticising this move.

“Earlier, the legal age of marriage for sons was 21 years, but for daughters it was only 18 years. The daughters also wanted that they should get time to pursue their studies and to get equal opportunities. Therefore, efforts are being made to bring the age of marriage to 21 years for daughters. The country is taking this decision for the sake of daughters,” Modi said.

“But everyone is seeing who is having problems with this,” the PM said, taking a swipe at his detractors for criticising the move.

Addressing a large gathering of women in Prayagraj in the run-up to the UP Assembly polls, Modi said the country was witnessing the work being done for women empowerment in the state.

Hitting out at the previous Akhilesh Yadav-led SP government, Modi charged there was “mafia raj” in the state five years ago, and that women were its “biggest victims”. Praising the Yogi Adityanath-led BJP government for cracking down on criminals and upholding UP’s law and order, he said the Yogi government has got the state rid of miscreants.

The PM said, “5 saal pehle UP ki sadkon par mafia raj tha. UP ki satta me gundon ki hanak hua karti thi. Iska sabse bada bhuktbhogi kaun tha? Meri UP ki behan betiyan thi. Unhe sadak par nikalna mushkil hua karta tha. School college jana mushkil hota tha. Aap kuch keh nahi sakti thin. Bol nahi sakti thin. Kyunki thane gaye to apradhi balatkari ki sifarish me kisi ka phone aa jata tha.” (Five years back, there was mafia rule on UP roads. Goons had influence in the government. Who was the biggest sufferer? My sisters and daughters in UP. It was difficult for them to move on roads, going to schools and colleges. You could not raise voice. Because if you had gone to police station, phone calls used to come there in favour of criminals and rapists).

“Today, there is security as well as rights in UP. Today UP has possibilities as well as business. I have full faith that with the blessings of our mothers and sisters, no one can push this new UP back into the darkness,” Modi said.

He was addressing the gathering after transferring an amount of Rs 1,000 crore to the bank account of Self Help Groups (SHGs), benefiting around 16 lakh women members of the SHGs. The function also saw the PM encouraging “Business Correspondent-Sakhis” (B.C.-Sakhis) by transferring Rs 4,000 as first month’s stipend to the account of 20,000 B.C.-Sakhis. He transferred over Rs 20 crore to 1.01 lakh beneficiaries under the Mukhya Mantri Kanya Sumangala Scheme. He also laid the foundation stone of 202 take-home ration manufacturing plants.

Referring to the BJP governments in UP as well as at the Centre, Modi claimed that the “double-engine government” was working relentlessly to empower women without any discrimination.

The PM said schemes like the Mukhya Mantri Kanya Sumangala Yojana were becoming a medium of trust for rural poor and girls. He said “Bank Sakhis” have taken banks to doorsteps in villages and have a huge responsibility for around Rs 75,000 crore transaction in UP.

Modi said the security, dignity and respect ensured by the double-engine government for UP women was unprecedented. “The stream of UP’s growth is unstoppable now. Mothers, sisters and daughters of UP have decided that they will not allow the return of circumstances under past governments,” he said.

Listing the steps taken by his government to enhance dignity of women and empower them, the PM remarked that for decades, houses and properties like farms were considered as the right of men only. His government’s schemes were aimed at removing this inequality, he said, citing the Pradhan Mantri Awas Yojana as a key example as the houses being given under the scheme were being built in the name of women.

Giving the example of UP, Modi said that out of over 30 lakh houses built in the state under the PM Awas Yojana, the registry of nearly 25 lakh houses was done in the name of women. “This is real empowerment of women,” he said.

Referring to Mudra Yojana, Modi said nearly 70 per cent of loans under the scheme have been given only to women so far. “I consider the sisters of women Self Help Groups to be the champions of the Atma Nirbhar Bharat campaign. These groups are actually National Help Groups,” he said.

The PM said his government has opened the doors of Sainik schools for girls and set up over 700 fast track courts across the country for speedy trial of heinous crimes like rape. He added that law has been enacted against triple talaq to protect Muslim women.