With the Lakhimpur Kheri case turning into a political hot button issue ahead of the UP elections next year, the spotlight is on Ajay Kumar Mishra, the Union MoS whose son now faces a murder case. 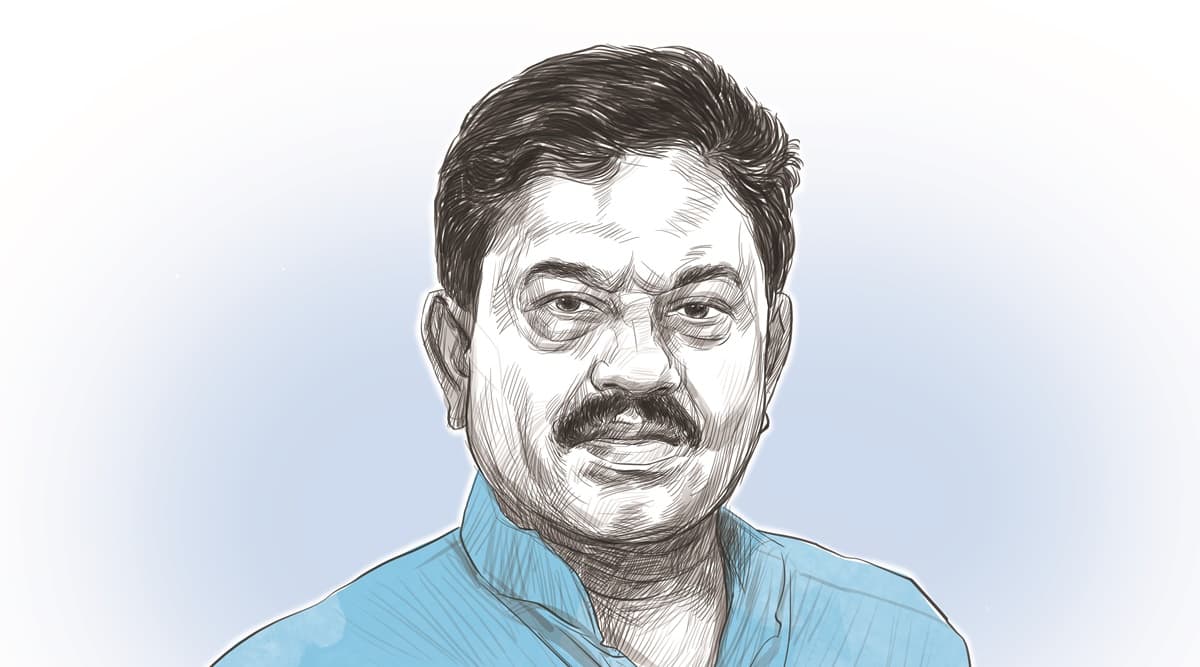 With the Lakhimpur Kheri case turning into a political hot button issue ahead of the UP elections next year, the spotlight is on Ajay Kumar Mishra, the Union MoS whose son now faces a murder case. The Sunday Express traces Mishra’s journey — from the ‘Teni Maharaj’ who settled village disputes to the two-time MP who found a spot in the Union Cabinet as the sole Brahmin face from UP.

On March 15, BJP Lakhimpur Kheri MP Ajay Kumar Mishra shared an unstarred question with the Congress’s Tiruchirappali MP, Su. Thirunavukkarasar. The question, marked to then Minister of Culture Prahlad Singh Patel, read: “Whether it is a fact that heavy damage has been caused by [farmer] protesters and many priceless antiquities and precious items… have been damaged and missing during the attack on the Red Fort on 26th January, 2021.”

Days later, on March 24, Mishra asked another unstarred question, this time of the Electronics & Information Technology Minister: “Whether the Government is contemplating to make any stringent law against the persons who were spreading propaganda on social media against the country and inciting violence in the name of farmers agitation….”

The two Parliament questions, along with a recent video of Mishra, now the Minister of State for Home in the Narendra Modi-led Cabinet, where he is seen threatening farmer protesters, offer early clues to the tension that had been steadily building up — until it blew up on October 3, when a convoy of cars, including one owned by Mishra, ploughed into a group of farmer protesters, killing four of them. In the violence that followed, the minister’s driver and two BJP workers were killed. A journalist was also among those who died.

Subscriber Only Stories
View All
ExplainSpeaking: How to evaluate a Union Budget
Mahesh Vyas writes: Why the job shortage is for real
Delhi confidential: Focus On Projects
Gandhi to Tagore: At old St Stephen’s campus, a glimpse into remnants of ...
Apply New Year promo code SD25
Top News Right Now
Click here for more
Ashish Mishra in Lakhimpur Kheri on Saturday. Mishra was arrested after being questioned for over 12 hours. (Express Photo by Vishal Srivastava)

The spiralling chain of events since then — the nationwide outrage over the killings, the Congress hitting the ground to take on the BJP over the killings, the filing of an FIR against Mishra’s son Ashish alias Monu, and the Supreme Court taking suo motu cognizance — have put the spotlight on Lakhimpur Kheri and its two-time MP, Ajay Kumar Mishra.

Mishra, 61, who started his political career in the Lakhimpur Kheri Zila Parishad in 2010 before becoming a BJP office-bearer and later district general secretary, was elected MLA in 2012. In 2014, he was elected to the Lok Sabha and re-elected in 2019.

Nicknamed “Teni Maharaj” — the ‘maharaj’ a nod to his upper-caste status —Mishra had a political mentor in Patel Ramkumar Verma, a BJP Kurmi leader and former Nighasan MLA, who, in 2012, briefly moved to the BSP. With Verma away in the BSP, Mishra contested that year’s election on a BJP ticket from Nighasan — and won.

“That was the moment he became a star for the BJP as Nighasan was the only seat the BJP won in 2012 from among Lakhimpur Keri’s nine Vidhan Sabha seats,” says a senior Samajwadi Party leader, adding that this win later paved the way for a Lok Sabha seat for Mishra.

“Because he was the only BJP MLA in the district, he was given a ticket for the 2014 Lok Sabha elections. And such was the Modi wave that election that even if the BJP had fielded a statue, it would have won. There are many such MPs here — they are not known beyond their districts or even beyond their villages,” says a senior Congress leader in Lakhimpur Kheri.

A vehicle set ablaze after violence broke out after farmers agitating were allegedly run over by a vehicle in the convoy of a union minister, in Lakhimpur Kheri, Sunday, Oct. 3, 2021. (PTI Photo)

Mishra’s win broke an established tradition of Lakhimpur Kheri sending Kurmi candidates to Parliament. He was the first Brahmin to win from the seat — since 1962, the seat has had at least nine MPs from the OBC community.

Despite being a two-time MP, Mishra was never on the party’s national scene until his surprise selection to the Union Cabinet in July. BJP leaders in the state admit that he wasn’t too active in state politics either, confining himself largely to Lakhimpur Kheri, having consolidated his hold over the region through the cooperative sector. Mishra was vice-chairman of the District Cooperative Bank Ltd in Lakhimpur Kheri from 1999-2002.

An enduring question about Mishra’s political career is how this largely local Kheri politician, who had never been a minister even in UP, was catapulted straightaway to the Union Cabinet. In the Modi government’s July Cabinet expansion, Mishra surprised many when he was picked as the sole Brahmin face from UP, ahead of other known heavyweights from the community.

“Kisi ko nahi pata kaise hua (No one knows how it happened),” says a Lakhimpur Kheri BJP leader on Mishra’s induction into the Union Cabinet.

Popular in his village

In Nighasan block and Banveerpur, Mishra’s ancestral village that is around 100 km from the district headquarters, the slogans are everywhere: “Nighasan janta ki pukaar, Monu bhaiyya ab ki baar.”

The slogans are an unabashed claim for an election ticket for Ashish, Mishra’s younger son who now faces a murder FIR in the October 3 case. But the events of the past few days have only served to strengthen the kinship the villagers share with Mishra and his family.

“Teniji (Mishra) has always been around in times of crisis. He intervenes in land disputes and settles them,” says pradhan Akash Mittal, 32, who won the recent panchayat polls as an Independent candidate.

Villagers say Mishra’s father Ambika Prasad settled in the village after migrating from Kanpur in the 1950s. Both Prasad, who died around 15 years ago, and Mishra’s elder brother Umesh have been pradhans in the past.

Mishra, who holds BSc and LLB degrees from Christ Church College and DAV College in Kanpur, is married to Pushpa Mishra. Besides Ashish, a BSc graduate, the couple have two other children — Abhimanyu, 37, a doctor who runs a clinic in Lakhimpur Kheri, and daughter Rashmi, who works as a clerk at the Lakhimpur Kheri Urban Cooperative Bank.

Also Read |Justice is in peril in Lakhimpur Kheri

According to his election affidavit filed for the 2019 Lok Sabha polls, Mishra’s movable assets, excluding his wife’s, are worth 1.93 crore and immovable assets are worth Rs 1.20 crore. The family owns two homes and a rice mill in Banveerpur village, a two-storey bungalow in Lakhimpur Kheri, and two petrol pumps. Mishra is the third of four brothers, with the eldest, Umesh Mishra, and the youngest, Vijay, in the business of foodgrain supplies.

Over the last few days, there have been accusations, including by BKU leader Rakesh Tikait, of how Mishra allegedly made his early money by dealing in illegal business activity in Nepal — his village in Lakhimpur Kheri is merely 15 km from the border.

People gather to pay their respects to the farmers who were killed in Lakhimpr Kheri (Express Photo: Vishal Srivastav)

Mishra, however, dismisses these as “false allegations” being spread by his detractors because of the “social work” he does in the region.

According to Mishra’s affidavit filed for the 2019 Lok Sabha polls, a criminal appeal is pending before the Allahabad High Court in a murder case filed against him in 2000, when he was accused of killing Prabhat Gupta, a Samajwadi Party youth worker. In February 2018, the HC had reserved the judgment in the criminal appeal.

The village of 9,000 people, mostly of Rana community members (who fall in the general category but are seeking SC status), also has a few Sikh homes on the periphery. Villagers insist that the MP shares a cordial relationship with the community. “Around one year ago, houses of some Sikh families were marked as forest land by the Forest Department. They came to Teniji, and he told them to go home, not worry. And the issue was sorted,” says Paikarma Prasad, a farmer.

Baljinder Singh, who is working on his farm in the neighbouring village, says, “There has never been any issue with the MP. We have invited him to all Sikh weddings… He is a popular figure here.” Singh refuses to talk any further.