Akhilesh, eight other ministers and several senior officials, including Chief Secretary Jawed Usmani, were present during the function. 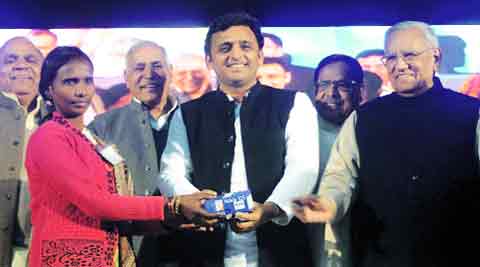 Chief Minister Akhilesh Yadav hands over a cellphone to a health worker after launching a scheme at Indira Gandhi Pratishthan, in Lucknow Sunday. Pramod Singh

An effort by a UP minister to project the ruling Samajwadi Party as pro-Muslim on Sunday created an embarrassing scene at an official function where later Chief Minister Akhilesh Yadav, to stem the situation, tried to present the secular face of his party.

Addressing a gathering of doctors, government officials and health workers, Health Minister Ahmed Hasan claimed that it was only the SP government, which had the courage to appoint a Muslim on two top posts — chief secretary and Director General of Police — in the state.

Akhilesh, eight other ministers and several senior officials, including Chief Secretary Jawed Usmani, were present during the function.

“We did not differentiate between Hindu and Muslim. Vice-Chancellor of Arbi Farsi University Anis Ansari deserved to become Chief Secretary, but previous government did not make him. It is only us, who have the courage to appoint Muslims as chief secretary and the DGP. We have created history,” Hasan said, adding that the previous governments had been biased.

He claimed that in the 22 months of SP government in the state, “No innocent Muslim has been framed in false cases, whereas in places like Gujarat and Mumbai, which have Congress and BJP government, over 5,000 people have been framed.”

He also praised Akhilesh referring to him as “honest Chief Minister”. He claimed that it was Akhilesh, who was able to control the Muzaffarnagar riots in 36 hours. He said, “In over 50,000 incidents of communal violence across the country, no other government has provided the kind of help that UP government has given.”

However, Akhilesh, latter tried to create a balance and said, “After Muzaffarnagar violence, there are some people, who are trying to create a negative publicity saying that Samajwadi party is party of only Muslims. We are not biased.”

Talking about the media reports comparing the Saifai Mahotsava with Muzaffarnagar relief camps, Chief Minister said, “Whatever is published in the newspapers, consider it false. There is one newspaper, which claims that Rs 300 crore have been spent on Saifai Mahotsav. Do not believe them.”