Following the incident, farm leaders called for the “arrest of the Minister and his son” who, they said, was driving one of the SUVs. They called for a probe by a sitting judge of the Supreme Court and said they would hold protests in all districts Monday to demand punishment for the guilty. Four farmers were among eight persons killed Sunday in UP’s Lakhimpur Kheri after a convoy of three SUVs, including one owned by Union Minister of State for Home Ajay Mishra, hit a group of farm protesters leading to a clash.

Following the incident, farm leaders called for the “arrest of the Minister and his son” who, they said, was driving one of the SUVs. They called for a probe by a sitting judge of the Supreme Court and said they would hold protests in all districts Monday to demand punishment for the guilty.

Opposition parties slammed the BJP state government for the “inhuman” and “cruel” incident and called for the resignation of Chief Minister Yogi Adityanath.

Describing the incident as “unfortunate”, Adityanath said “strict action will be taken against those found guilty” but also said that his government “would go deep into the matter and expose the people behind today’s incident”. He also appealed to residents in the area to maintain peace.

Late Sunday, the bodies of the four farmers killed were kept by protesters on the ground of a local college with protesters saying they would allow a post mortem only after the arrival of their national leaders. 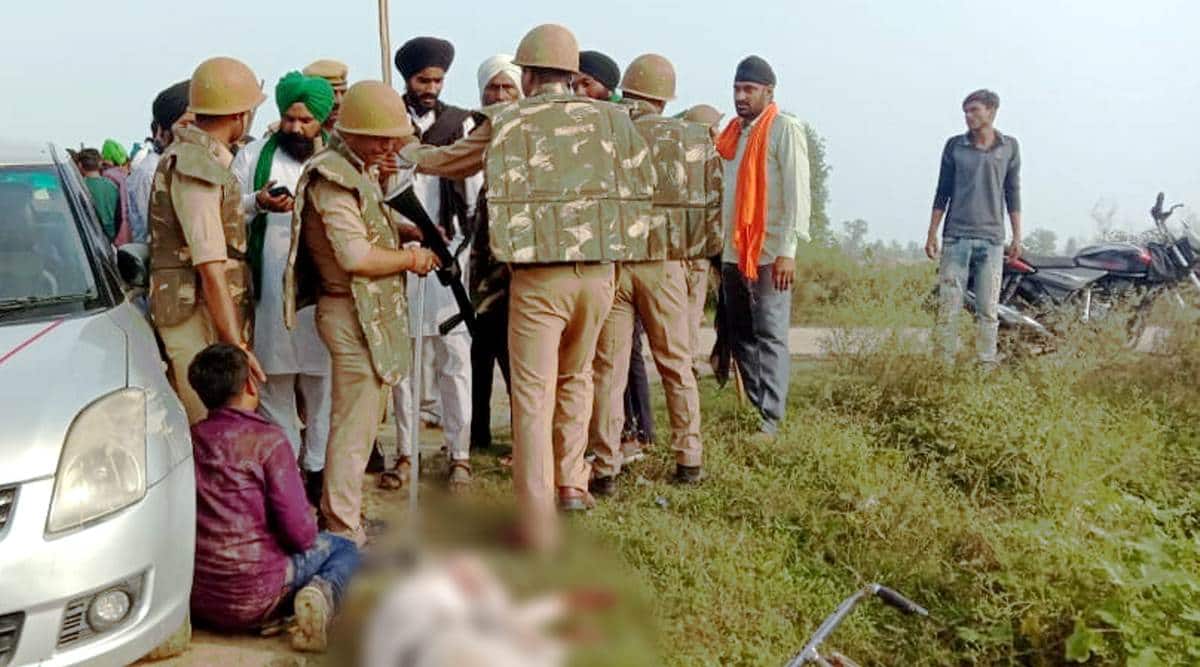 Union MoS Mishra told The Indian Express that the four others killed were “BJP workers and a car driver” who died after being “attacked by assailants armed with swords and sticks who were among the farmers”.

Mishra said his son Ashish, who is a businessman, was not at the spot when the incident occurred. “Two vehicles were set ablaze by the miscreants — one belongs to me and the other to a party worker,” said Mishra, who is the BJP MP from Lakhimpur Kheri.

According to police, the incident occurred when farmers assembled at the Tikonia crossing to show black flags to UP Deputy Chief Minister Keshav Prasad Maurya, who was scheduled to visit Banveerpur, the village of Mishra’s parents, for an event.

Official sources said the farmers were angered by a purported video from last week that showed Mishra allegedly challenging those protesting against the Centre’s new farm laws.

On Sunday afternoon, sources said, “hundreds of protesters” gathered as part of the move to block Maurya’s convoy. “Suddenly, the SUVs came from Banveerpur and farmers attempted to stop them. In an attempt to escape, one of the drivers lost control of his vehicle and hit the farmers. The angry farmers stopped the vehicles and beat those inside,” sources said.

Jagtaar Singh Bajwa, an SKM spokesperson, said that the “farmers were protesting peacefully”. “The Union Minister of State for Home’s son ran his car over them. In the incident, several farmers were injured and some have died,” Bajwa said.

Speaking to reporters, Misra denied that his son was driving the vehicle. “It was his driver who was driving. As stones were pelted at the vehicle, it overturned and two farmers came under it,” he said.

Speaking to The Indian Express, Mishra said: “My party workers were going to receive the Deputy CM when some assailants, who were among the farmers, attacked them with sticks and swords. Three party workers and a car driver died in the attack. They destroyed the vehicle and set it ablaze.”

Police sources said there were three SUVs involved in the incident and that the driver of one managed to escape with the vehicle. “The other two vehicles got trapped in the crowd,” sources said.

Mishra, 61, was the lone Brahmin face from UP to be inducted in the Union Cabinet during the recent reshuffle. He is a two-time MP from Lakhimpur Kheri. Asked about his statement on farmers protesting against the new laws, he said: “It is false that I targeted farmers. If anyone sees the entire speech, it will be clear that I was talking about assailants hiding among the farmers.”

BKU leader Rakesh Tikait said in a statement: “The farmers who were protesting were returning when they were attacked by cars. They were fired at. Several people have died as per information till now. I am going to Lakhimpur Kheri from (Ghaziabad).” Police, however, denied that the protesters were fired at.

BKU’s Gurnam Singh Chaduni has called upon farmers to reach Lakhimpur Kheri “in large numbers”. “The protesting farmers were sitting on the road when they were crushed. Some have died and while several have sustained injuries,” he said.

“The Minister and his son should be arrested after lodging an FIR under murder charges. This Minister had threatened farmers earlier, too. UP Deputy CM Keshav Prasad Maurya…should resign from his post,” Chaduni said.

Later Sunday, neighbouring Haryana witnessed protests over the incident with candle marches held in Ambala and Karnal while a road was blocked for a while in Fatehabad.

With UP elections due in a few months, SP chief Akhilesh Yadav called on the Chief Minister to resign. AICC general secretary Priyanka Gandhi questioned the BJP for “targetting” farmers and said “enough is enough”. BSP chief Mayawati said that the Supreme Court should take suo-motu cognizance of the incident.

With several Opposition leaders, including Priyanka, planning to reach the site of the incident Monday, a senior police officer told The Indian Express that “no political leader will be allowed to visit Lakhimpur Kheri tomorrow”.

UP DGP Mukul Goel described the situation at the spot as “tense but under control”. Senior police officers, including ADGP (Law and Order) Prashant Kumar and IGP (Lucknow) Laxmi Singh have been sent to the spot to ensure that the situation is under control. —(With Maulshree Seth)