Bengal bypoll results Live Updates: After claiming victory from her home turf, Banerjee said, "It is a victory against the conspiracy that was hatched to defeat me from Nandigram. I thank the people of Bhabanipur for giving me such a huge mandate." 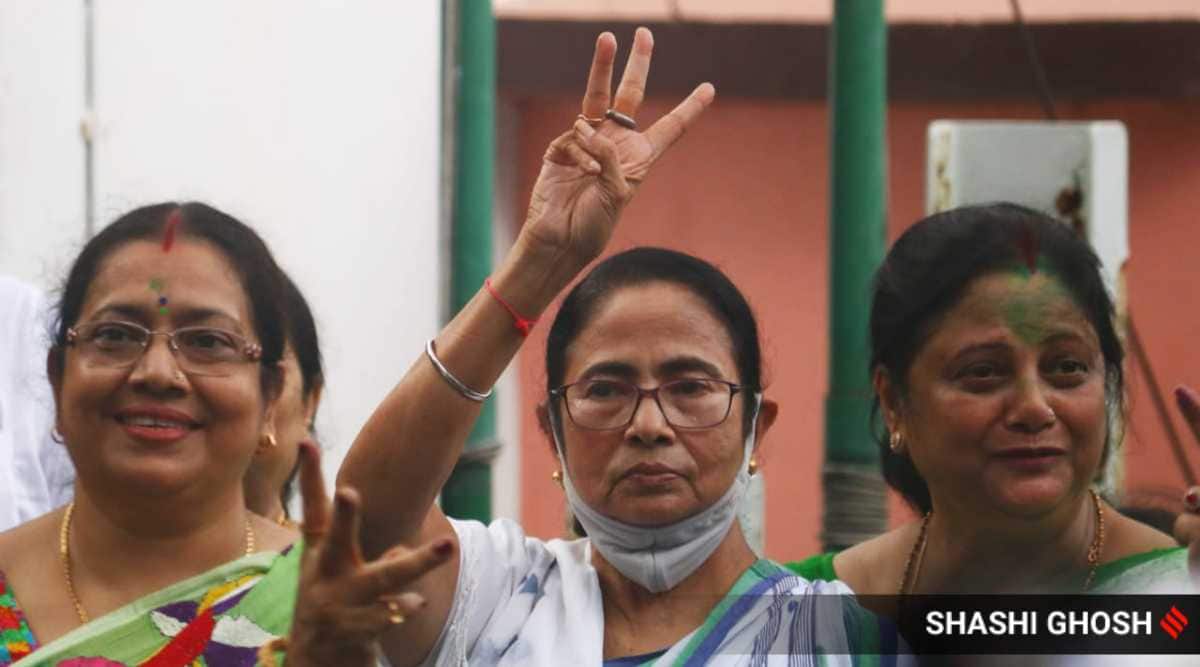 Mamata Banerjee showing victory sign after she won the bypoll from Bhabanipur seat.

Bypolls result Live News and Updates: West Bengal Chief Minister Mamata Banerjee won the bypoll to Bhabanipur seat by a margin of 58,835 votes on Sunday. After claiming victory from her home turf, Banerjee said, “It is a victory against the conspiracy that was hatched to defeat me from Nandigram. I thank the people of Bhabanipur for giving me such a huge mandate.”

Meanwhile, BJP candidate Priyanka Tibrewal blamed “fake voters” for their defeat. “If people were allowed to vote, the result would have been different. Even I got hold of fake voters on the polling day. In several booths, polls were rigged. But I will admit that our organisation was weak in Bhabanipur. We have to improve this,” Tibrewal said after her defeat from Bhabanipur.

In Murshidabad district too, the Trinamool Congress has clinched victory in Samserganj seat by 26,379 votes while the party has defeated BJP in Jangipur seat by 92,480 votes.

The counting of votes to the crucial bypoll to the Bhabanipur seat in south Kolkata, where TMC supremo Mamata Banerjee is contesting to retain her chief minister’s seat, kicked off at 8 am amid heavy security deployment. Votes are also being counted for the bye-elections held in Jangipur and Samserganj assembly constituencies in the Murshidabad district of the state and the Pipili constituency in Odisha.

Trinamool Congress leads in all 3 seats; EC asks Bengal govt to ban celebrations after counting of votes; 24 companies of central forces deployed at counting centres; Follow this space for latest news and updates:

Trinamool Congress wins Shamserganj seat in Murshidabad district by a margin of 26,379 votes.

Ruling BJD candidate Rudra Pratap Maharathy on Sunday widened his lead over nearest rival Ashrit Pattanayak of the BJP to 11,196 votes at the end of the eleventh round of counting in the Pipili by-election, the Election Commission said. Maharathy secured 42,774 votes, while Pattanayak bagged 31,578 votes, and Congress nominee Bishwokeshan Harichandan Mohapatra got 2,602 votes. Of the 78,675 votes counted till the end of the eleventh round, 401 people chose the NOTA (none of the above) option, it said. Around 78.24 per cent of over 2.29 lakh voters had exercised their franchise in the by-poll on September 30. A total of 25 rounds of counting will be held. --PTI

Result would've been different had people been allowed to vote: BJP's Priyanka Tibrewal

"If people were allowed to vote then the result would have been different. Even I got hold of fake voters on the polling day. In several booths, polls were rigged. But I will admit that our organisation was weak in Bhabanipur. We have to improve this," said BJP candidate Priyanka Tibrewal after her defeat from Bhabanipur.

People voted against conspiracy to defeat me from Nandigram: Mamata

"This is the first time that we have not lost from a single ward in Bhabanipur. About 46 per cent voters here are non-Bengalis. They have cast their votes in a peaceful atmosphere. They have given me the inspiration and new energy to work more for people. We are also winning Jangipur and Samserganj seats," said Banerjee. "There has been a lot of conspiracy to defeat me from Nandigram. Even a case is pending (on Nandigram results) at the court. But people have voted against this conspiracy," the CM added.

Have broken by own record: Mamata after winning Bhabanipur by over 58,000 vote margin

West Bengal Chief Minister Mamata Banerjee on Sunday won the bypoll to Bhabanipur seat by a margin of 58,832 votes. After claiming victory from her home turf, Banerjee said, “It is a victory against the conspiracy which was hatched to defeat me from Nandigram. I thank the people of Bhabanipur for giving me such a huge mandate.”

Vote shares of parties fighting it out at Bhabanipur constituency. West Bengal Chief Minister Mamata Banerjee is heading for a record victory as she is leading by 45,738 votes in the Bhabanipur bypoll after the 17th round of counting on Sunday afternoon, as per the Election Commission. The TMC is also ahead in Murshidabad's Samserganj and Jangipur constituencies, where votes are being counted for the assembly elections.

The Trinamool is also leading at Murshidabad's Samserganj and Jangipur seats, where by-elections were held after the deaths of two candidates.

Celebrations have already begun in the TMC camp. TMC supporters have gathered outside the Kolkata residence of Mamata Banerjee who has gained significant leads over the BJP candidate in the Bhabanipur bypoll results.

#WATCH | TMC workers & supporters celebrate outside the residence of West Bengal CM Mamata Banerjee in Kolkata as she leads by 28,825 votes in Bhabanipur bypolls after 9th round of counting pic.twitter.com/XlZhaJPB0n

EC writes to Bengal govt to ensure no processions, violence after results

The Election Commission has written to the West Bengal government, asking it to ensure that no victory celebration/procession takes place during or after the counting of votes for the Bengal by-elections. EC has also asked the state government to take all necessary steps to ensure there is no post-poll violence.

Mamata Banerjee leads by 23,957 votes after sixth round of counting

West Bengal Chief Minister Mamata Banerjee leads by 23,957 votes after sixth round of counting. TMC's Jakir Hossain leads by 15,643 boyes after fifth round in Jangipur while the party's Amirul Islam leads by 3,768 votes in Samserganj.

TMC leading in Jangipur by over 12,000 votes

According to the Election Commission, TMC candidate Jakir Hossain is leading with over 20,000 votes while the BJP candidate is trailing at the second spot with over 8,000 votes. TMC supporters celebrate outside CM Mamata Banerjee’s residence in Kolkata as she gains early leads in the Bhabanipur assembly by-election.

After the fourth round of counting, Mamata Banerjee leads in the Bhabanipur Assembly constituency by 12,435 votes.

CM Mamata Banerjee leading in Bhabanipur, TMC ahead in other 2 seats also

West Bengal Chief Minister Mamata Banerjee is leading by a margin of 2,799 votes at the end of the first round of counting for the Bhabanipur assembly bypoll. A total of 21 rounds of counting will be held for the bypoll which was held on September 30.

TMC leading with 4,542 votes in Jangipur

After the first round of counting of votes, TMC is leading with 4,542 votes, BJP is at the second spot with 2,825 votes and RSP has secured 255 votes. TMC's Jakir Hossain is leading by 1,717 votes.

Tight security in place in Bhabanipur

The Election Commission has ordered a three-tier security with 24 companies of central forces at the Bhabanipur constituency to avoid any violence or clashes. 24 companies of central forces have been deployed at the counting centres and the entire area will be put under CCTV surveillance.

Babanipur, which went to the polls on September 30, saw a modest turnout of 53.32 per cent. The two other Assembly seats in the state, however, reported a higher turnout. Samserganj recorded 78.60 per cent voter turnout, while Jangipur 76.12 per cent till 5 pm, as per Election Commission data.

Voting was largely peaceful, and no major incident of violence or electoral malpractice was reported, EC officials said. The poll body said it received 97 complaints, of which 91 were quashed. Of these 97 complaints, 85 were related to the Bhabanipur bypoll.

Bhabanipur bypoll: Everything but politics

Bhabanipur — the constituency in south Kolkata thrust into the limelight as the seat from where Mamata Banerjee will seek to enter the Assembly through a by-election on September 30, after her loss from Nandigram in the state elections earlier this year — has had an extended electoral season, and the fatigue is showing. Located in south Kolkata, Bhabanipur is arguably the most cosmopolitan part of the city. About 40 per cent of its voters are non-Bengalis — mostly migrants from Punjab, Gujarat, Bihar, Uttar Pradesh.