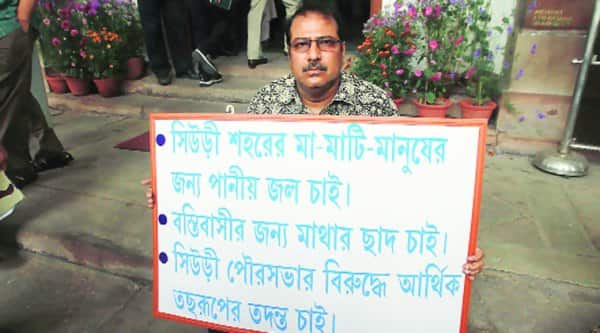 The rumblings within the ruling Trinamool Congress once again came to fore on Wednesday when party MLA Swapan Kanti Ghosh staged a dharna outside the West Bengal Assembly alleging embezzlement of funds in the party-run Suri municipality in Birbhum district. In a quick action, the party suspended Ghosh, MLA from Suri, with immediate effect pending enquiry.

As the House assembled in the morning for the ongoing Budget Session, Ghosh sat on a dharna in front of the Assembly demanding that the government order an investigation into how, a drinking water project in Suri, for which central government allotted Rs 14.17 crore seven years ago, did not see the light of the day.

He said during the past two-and-half years he had taken up the issue with the party and also written to state Urban Development Minister Firhad Hakim and Chief Minister Mamata Banerjee but no action was taken. “I am forced to do a sit-in today due to the neglect and humiliation,” he said.

Ghosh also distributed copies of a letter he written to Mamata on January 6 detailing the alleged fraud.

“There was a major embezzlement of funds. Out of Rs 14.17 crore, some Rs 12.28 crore had gone to the Suri municipality. The civic body could give an account for Rs 7 crore, but could not submit details of remaining Rs 5.28 crore, which is supposed to be kept in the Suri branch of Indian Overseas Bank,” Ghosh’s letter read.

The letter further states that for slum development, the central government had sanctioned Rs 14. 47 crore under JNNURM. “Out of that Rs 7.22 crore was received. No account of Rs 5.08 crore (out of Rs 7.22 crore) was traceable…I raised the matter in meetings attended by Minister for urban development Firhad Hakim and party general secretary Mukul Roy. At that meting Hakim said if he started an investigation the chairman of Suri municipality would go to jail…I cannot take the responsibility of the theft by the chairman and councillors of our party. I request you to please take action,” Ghosh said in the letter to Mamata.

Speaking to reporters, Ghosh said if he failed to arrange for drinking water for the people he represented, he would quit politics.

Soon after, TMC secretary general and a member of party’s disciplinary committee Partha Chatterjee announced that Ghosh has been suspended with immediate effect pending enquiry.

Ghosh’s act was “politically motivated”, he said, adding that he resorted to it without any discussions with the party. “We know at which party’s instigation he has done it,” Partha added.

Earlier in the day, Leader of Opposition Surya Kanta Mishra raised the issue in the Assembly demanding statement from the government as to why a member of the ruling party was staging demonstration outside the House. He also sought a discussion on the allegations levelled by Ghosh.

Speaker Biman Bandopadhyay told the members that he knew about Ghosh’s demonstration and had requested him to come to his chamber but he refused.

Urban Development Minister Firhad Hakim told the House that Ghosh had written to the chief minister who had asked him (minister) to enquire into the allegation. Departmental enquiry order was also given, Hakim said, adding that process was already on to start the drinking water project.

There were charges against the MLA which would also be probed, he added.

The move comes amid speculation of a rift between Roy and TMC supremo and Chief Minister Mamata Banerjee.

“Under the instructions of Mamata Banerjee, he has been removed from the post of parliamentary secretary. We also informed the Assembly Speaker about the decision,” state Parliamentary Affairs Minister Partha Chatterjee told reporters on Wednesday.

Dutta, who is in Delhi, told TV channels over phone that officially he was not aware of the decision. He said,“It is entirely the prerogative of the chief minister. I am in the party and I am following instructions of the party.”

On his meeting with Roy, he said “I came to Delhi to consult doctor. I met Mukul Roy”.

The party leadership had last week accused Roy’s son and party MLA Subhrangshu Roy of apparently breaching discipline by making certain remarks against the party. The TMC leadership also did not rule out disciplinary action by the party against Subhrangshu. (ENS)