The complaint was filed by victim Subhabrata Chakraborty's wife, Subarna, at Kanthi police station on on Wednesday, following which an FIR under IPC sections 302 (murder) and 120B (criminal Conspiracy) was registered against unidentified people. 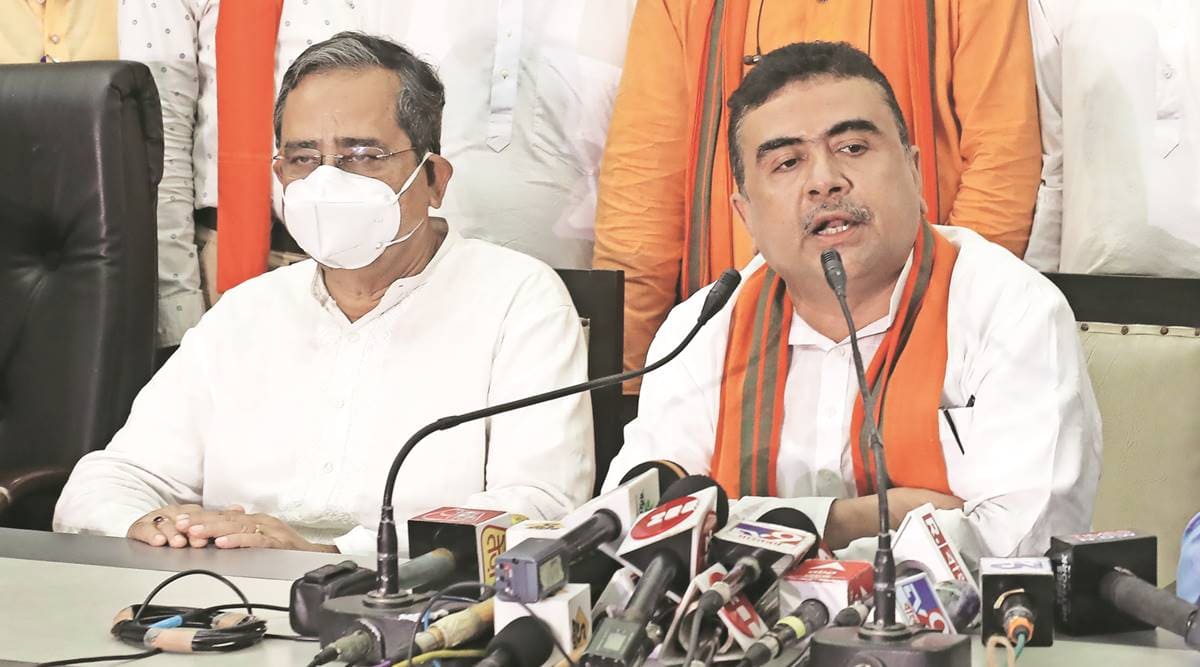 BJP MLA and Leader of Opposition in the West Bengal Assembly Suvendu Adhikari (right) addresses a press conference on Friday. Suvendu accused the TMC government of "doublespeak" for targetting the Centre over divestment of PSUs while it was selling off profitable units. (Express photo by Partha Paul)

More than two years after the death of a 40-year-old security personnel of then state transport minister Suvendu Adhikari, West Bengal Police has started a fresh investigation into the alleged suicide and registered a case under murder charge against unidentified persons.

The complaint was filed by victim Subhabrata Chakraborty’s wife, Subarna, at Kanthi police station on on Wednesday, following which an FIR under IPC sections 302 (murder) and 120B (criminal Conspiracy) was registered against unidentified people. The BJP said the case was filed out of “political vendetta”.

“I was doubtful from Day 1 of the incident but didn’t speak against him (Adhikari) because he was very powerful. I live with two daughters so I never gained courage to file a complaint. But now the situation has changed a bit, and hence I feel the case should be re-investigated,” Subarna told media. In October 2018, Kanthi police had registered a case of unnatural death and claimed that Chakraborty had shot himself with his service revolver. A suicide note was recovered from his pocket, police had then claimed.

Adhikari, who switched to the BJP before the Assembly polls in April, is the Leader of Opposition in the Legislative Assembly.

Recalling the sequence of the event in 2018, TMC MLA Tilak Chakraborty, who is also brother of the security personnel, said, “A day before October 13, he went to Murshidabad with dada (Adhikari). He was a security personnel working with West Bengal Police. He returned around 2 am and spoke to his wife on the phone. Around 10:30 am, he again spoke to her. After sometime on the same day, Suvendhu Adhikari called and informed me about his death. I think his wife wanted to file complaint even then but didn’t.” A resident of Mahishadal area’s in East Midnapore, Chakraborty used to stay in a rented house near Kanthi and had been working as Adhikari’s bodyguard for several years.

“Police had then suspected it to be a case of suicide. There was no certainty; hence, it must be probed. We want a thorough investigation into the case,” said TMC’s youth wing president of Purba Midnapore S Giri.

BJP’s district (organisational) president Kanthi Anup Chakraborty said, “These days, I have been reading news of fake vaccines and fake police. It seems this government is itself a duplicate one. Since, Adhikari has joined our party, the ruling party with intention of political vendetta has been charging him with different cases.”