Speaking at a rally in Kolkata, Banerjee also said the BJP was buying skullcaps for its cadre, who were then wearing them while vandalising public property, to 'malign a community'. 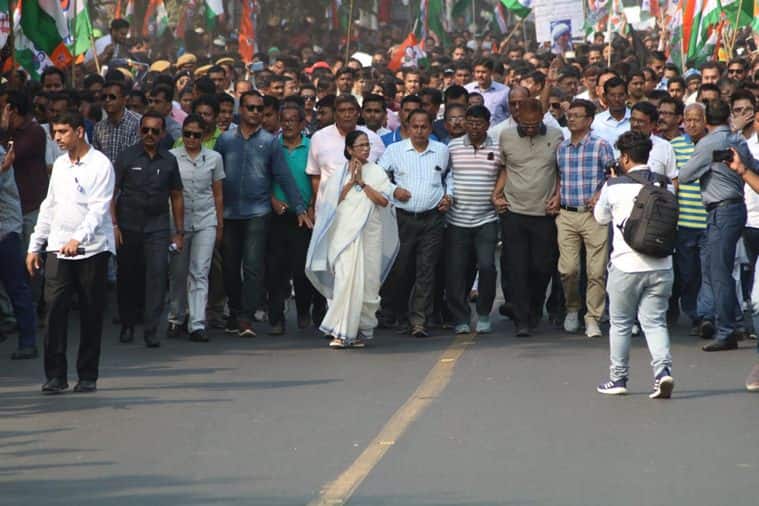 Banerjee has been leading mammoth rallies against the CAA for four days in a row now. (Express photo: Shashi Ghosh)

Banerjee, who has been leading mammoth rallies against the CAA for four days in a row now, also said the BJP was buying skullcaps for its cadre, who were then wearing them while vandalising public property. Follow Citizenship Act protests LIVE Updates

“BJP wants to make the Citizenship Amendment Act a fight between Hindus and Muslims. It is buying skull caps for its cadres, who are wearing them while vandalising properties to malign a particular community. We are not living in this country at mercy of others,” she said.

The Bengal CM took another dig at the BJP, saying while the party was founded in 1980, “it is asking for our citizenship documents from 1970.”

#WATCH West Bengal Chief Minister Mamata Banerjee in Kolkata: Let there be an impartial organisation like United Nations or Human Rights Commission form a committee to see how many people are in favour or against #CitizenshipAmendmentAct. pic.twitter.com/qiqhKt3Cxu

Bengal has seen violent agitations against the CAA, with protesters burning railway stations, trains and buses. Banerjee, however, has claimed that the BJP is behind the violence. “We have arrested more than 600 people (for creating trouble). The arson and vandalism could be the handiwork of the BJP also,” she had said on Tuesday.

Banerjee has been strident both in her opposition to the CAA and the proposed National Register of Citizens (NRC) and in her attacks at the ruling BJP over them. On Wednesday, she had hit out at Home Minister Amit Shah, saying “Your job is not to set the country on fire, but to douse it. You are the Home Minister of the country. Please control the country and maintain peace.”

A day after Shah said that there is no going back on the citizenship Act and the government is firm like a rock on its implementation, Banerjee mocked him saying, “Tum agar rock ho, humlog bhi chuha hai. Tumko kutus kutus katega. (If you are a rock, we are rats. We will bite you).”

While several chief ministers have said they will not allow NRC, Bengal has taken a step towards that, by staying activities related to the National Population Register.

Merry Christmas: Jingle Bells gets a Sinkari melam twist and netizens are loving it