Living reality of Muslims in Bengal: More girls go to school, college ‘out of question’ for both gender

Girls, at least till the primary level, are not only pushed by their families into studying but have done better than their male counterparts. The study reveals that over the past decade, the gender gap in literacy has reduced considerably — 16.2 per cent nationally and 11.1 per cent in West Bengal.

CONTRARY TO the perception, the gender parity between men and women from the Muslim community in West Bengal is comparatively better in terms of literacy. Girls, at least till the primary level, are not only pushed by their families into studying but have done better than their male counterparts.

The data, put together in the recent study — ‘Living Reality of Muslims in West Bengal’ — by Professor Amartya Sen’s Pratichi Institute in collaboration with non-profit organisations SNAP and Guidance Guild, depicts a better picture of girls’ education till the age of 17 (primary level) but turns grim as they move towards higher education.
Overall, however, the state’s Muslim community still trails the general population in literacy — against the state’s average of 76.3 per cent (Census 2011), the average literacy rate among Muslims stands at 69.5 per cent (Sen’s study).

A large portion of the community members, the study notes, either remain “illiterate” or, at best, earn the “school dropout” tag. 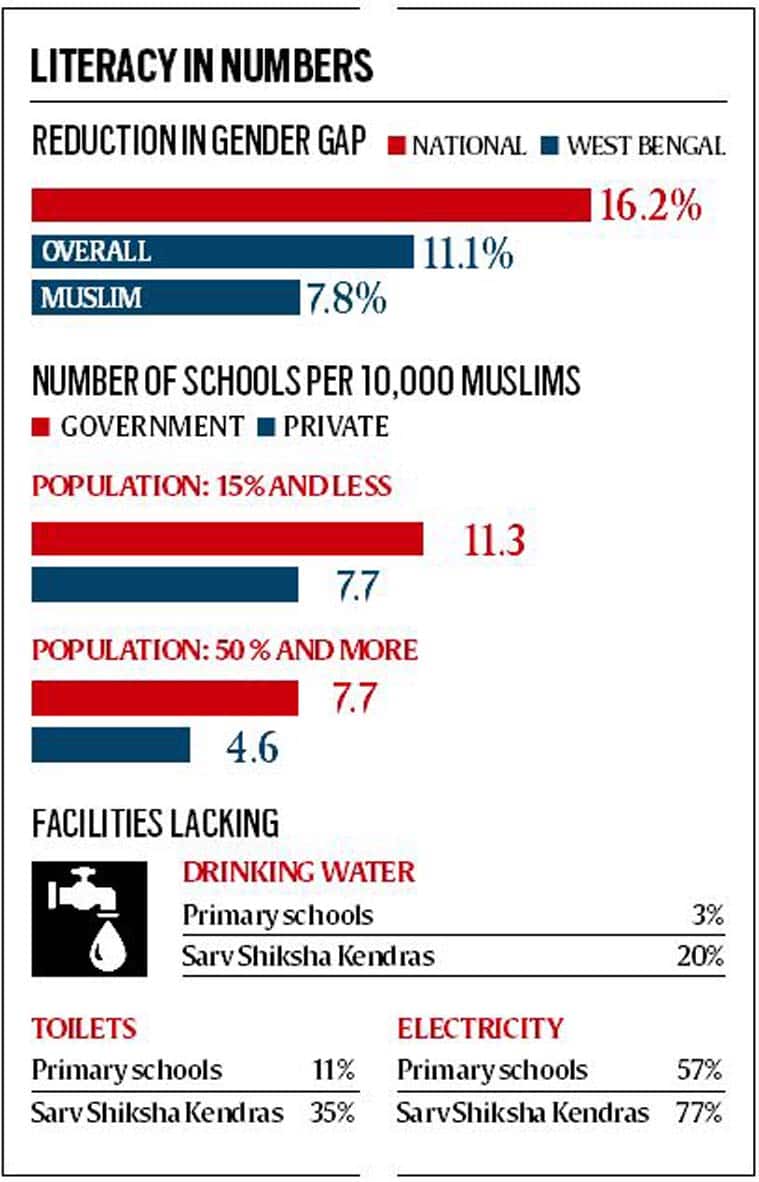 The study reveals that over the past decade, the gender gap in literacy has reduced considerably — 16.2 per cent nationally and 11.1 per cent in West Bengal. Among the state’s Muslim community, this gap is even lower — 7.8 per cent as per the Census 2011 and 4.8 per cent according to the survey carried out by this study.

“This difference, in addition to the achieved rates of male and female literacy (71.8 and 67 per cent) defies generally accepted ideas about the religious orthodoxy of Muslim families and underlines a recent surge of determination in the community to educate its girls,” the report says.

The low figure for Bengal, acknowledges the study, is “more significant” since a large portion of the state’s Muslim community resides in rural areas. In areas of high and medium concentration of Muslim population — South Dinajpur, Malda, Murshidabad, Nadia, North 24 Parganas and Howrah — the gender gap is “lower” in comparison to other communities. Programmes such as Sarva Shiksha Abhiyan, the study says, have been “instrumental” in ensuring a higher literacy rate among Muslim women.

But the overall picture of Muslims’ education in Bengal is nevertheless bleak. Nearly half of the Muslim adult population (47.7 per cent) are either “functionally illiterate” or were unable to complete their primary education, including schooling at Madrasas and Maktabs, where there has been “little scope for learning English, maths, geography, history etc”. The non-availability or inadequate availability of primary schools in localities, too, have been major contributors. Access to higher secondary schools has been more difficult, leaving a college degree in most parts “out of the question”.

“Due to political and social environment of perceived discrimination against Muslims, the community often believes their children will not get government or private sector jobs,” the study says. Therefore, the incentive for Muslims to push their children towards attaining degrees, which appears to be holding “no apparent benefit”, is less.

Poverty and financial insecurity in Muslim families remains the main reason for their children dropping out of school, says the study.