Mother-son dumped the body parts in nearby pond, bushes, then went to police station to file a missing person report: Police 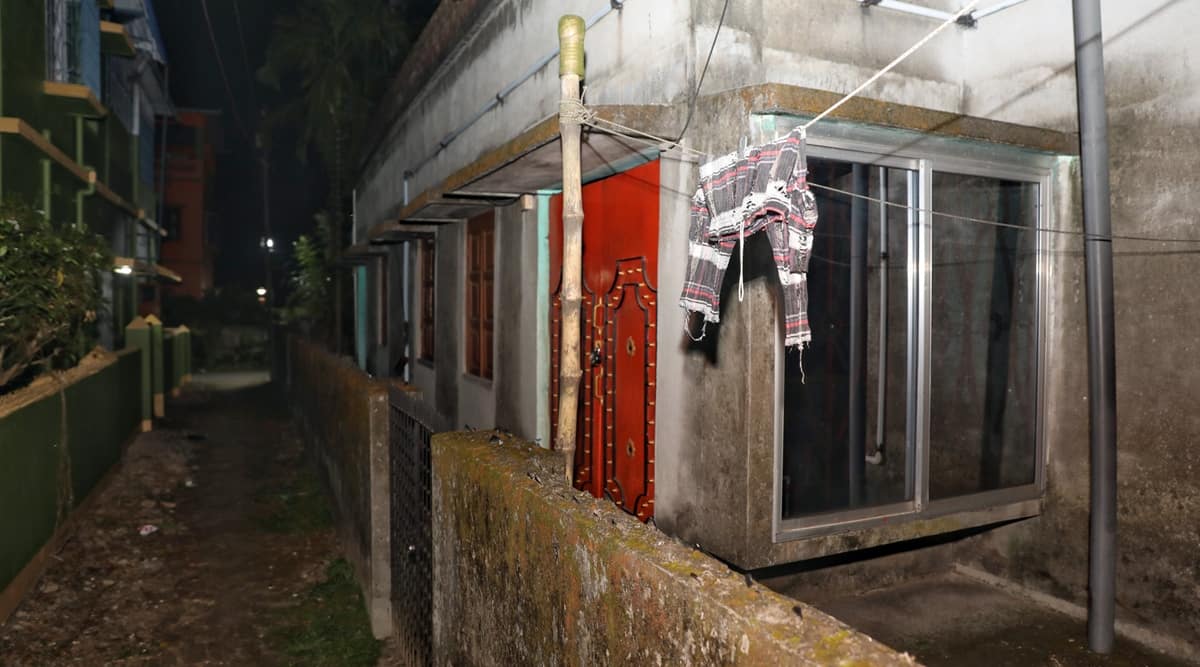 The house where the Chakraborty family lived in Baruipur, on Sunday. (Express photo by Partha Paul)

Days after Shraddha Walkar’s killing in Delhi shook the country, a similar macabre murder has come to the fore in Baruipur, 40 km from Kolkata, where a 50-year-old woman and her 25-year-old son have been arrested for allegedly killing her husband and then chopping his body into six part before dumping them in nearby areas.

Police said 55-year-old Ujjawal Chakraborty, a former Navy personnel, was killed by his wife, Shyamali Chakraborty, and son Raju Chakraborty alias Joy, on November 14 evening after they had a quarrel over paying Rs 3,000 examination fees of the son.

“So far, our investigation has found Ujjawal was an alcoholic and used to assault his son. On November 14 evening, he had a fight with his wife and his son attacked him. Out of rage, Raju strangulated his father,” Superintendent of Police (Baruipur) Pushpa said. The son, who had studied polytechnic from ITI and was looking for a job, used a hacksaw from his carpentry class kit to cut the body into pieces, said police.

Ujjawal’s body was chopped into six pieces and his son disposed of them in a nearby pond and bushes, said a police officer, adding the body parts were wrapped in plastic bags. The son made at least six trips on his cycle to dump the body parts in a radius of around 500 metre in Khas Mallick and Dehimedan Malla areas, said police.

Also Read |Aaftab, Shraddha ‘argued over who would spend to make trip to Mumbai’, say police

The next morning after disposing of the body parts by 3 am, the wife and son went to the police to file a missing person’s report, saying Ujjawal, who worked as a security guard in a private agency, didn’t return home.

Two days later, on November 17, parts of the body started to float in a nearby pond.

Advertisement
The pond from where the head was found. (Express photo by Partha Paul)

“On Thursday evening, I was sitting on the top floor of my house when we saw a red T-shirt floating in the pond. Soon, we understood it was a human body. The head was wrapped in a polythene bag. After people confirmed it was a human body, we informed the police,” said Subhra Chatterjee, whose house is located adjacent to the pond.

According to police, the human head was wrapped in a polythene bag of a famous garment shop in the area. “That helped us to trace the locality of the victim. After we identified the body, the mother and son were questioned. They had come under suspicion when they lodged a missing diary in the wee hours of November 15. The time when they went to Baruipur police station to lodge the missing complaint was what struck us. Even after we established the identity of the dead person, they claimed that Ujjawal must have been killed by some outsider since he was a habitual drinker and would often get involved in fights. But after prolonged interrogation, they confessed to killing him and chopping the body into six parts,” said a police officer involved in the probe.

Till now, police have found four out of the six body parts, including the head, waist, and two legs.

While the two legs were recovered from under a garbage dump, the head and stomach were fished out of a pond in Dehimedan Malla.

The police have not yet found the two hands of the deceased.

According to police, the son left the house six times to dispose of the body parts on the night of the murder with his mother accompanying him on his first trip.

The woman and her son were produced in a court on Sunday, which sent them to 12-day police custody.