BJP protests across West Bengal against violence in Bangladesh

TMC leader Krishanu Mitra in turn referred to the killing of migrant workers in Kashmir and said BJP should stop lecturing Bangladesh. 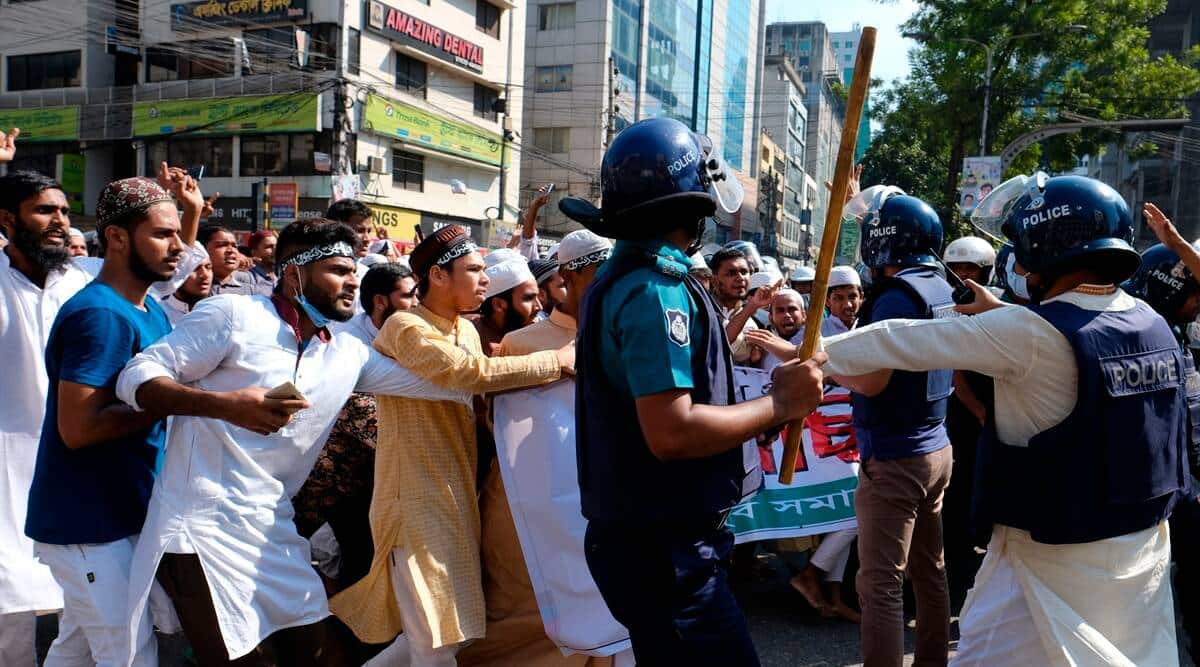 The BJP on Monday organised demonstrations across West Bengal to protest against attacks on Hindu minorities and temples in Bangladesh in the past few days, while a party delegation visited the Bangladesh Deputy High Commission here to register its protest. The Opposition party also questioned the Trinamool Congress’s alleged silence on the matter.

The attacks began last Friday and have claimed at least five lives while leaving several injured. The violence erupted in pockets of Bangladesh following an incident of alleged blasphemy at a Durga Puja pavilion at Comilla, around 100 km from Dhaka. There have been reports of sporadic clashes between the Bangladesh police and communal mobs while the media has reported the vandalisation of Hindu temples and Durga Puja venues.

The party’s state president Sukanta Majumdar said, “These kinds of barbaric attacks have no place in a civilised society. The Bangladesh government must take action and ensure the safety and security of Hindu minorities. However, here in Bengal, some political parties are maintaining silence on this issue for vote-bank politics.”

State BJP spokesperson Shamik Bhattacharya claimed that the saffron party was the only one that cares about Hindu and Buddhist minorities in India’s neighbourhood, and said these attacks underscored the importance of the Citizenship Amendment Act (CAA).

He added, “This is an attempt to drive away the minority population from neighbouring countries. It is a part of a bigger plan. This is the reason why the BJP government at the Centre came up with CAA. But other political parties are saying that it is an internal matter of Bangladesh. Those who had opposed the CAA to suit their political interest did not think about the plight of Hindus in Bangladesh. The TMC has maintained silence on the attacks. They are not saying anything about this.”

Leader of the Opposition Suvendu Adhikari, along with a delegation of BJP MLAs, visited the Bangladesh Deputy High Commission in Kolkata and met its officers to inform them of the party’s concerns and stand on the matter.

Hitting out at the Opposition party, TMC leader Krishanu Mitra referred to the killing of migrant workers in Kashmir and said the saffron party should stop lecturing Bangladesh about protecting Hindus.

“While the @BJP4India & GOI lectures the Bangladesh govt over the security of Hindus in Comilla and elsewhere from extremists, the Modi govt itself continues to fail to provide security to Indians, primarily Hindus in J&K. Two more Hindu labourers killed by terrorists in Kulgam,” he tweeted.

Hindu philanthropic organisation Bharat Sevashram Sangha also condemned the violence against Hindus and demanded strong action against the culprits. Members of civil society organisations gathered outside the Academy of Fine Arts here to condemn
the violence.

Meanwhile, 55 intellectuals from Kolkata’s minority communities issued a joint statement to register their protest against the attacks on minorities in Bangladesh. The signatories, educationist Miratun Nahar and writer Abul Bashar among them, appealed to the Bangladesh government to ensure the safety and security of Hindus. Bangladesh Prime Minister Sheikh Hasina has said that action will be taken against people trying to “disturb communal harmony” in the country.