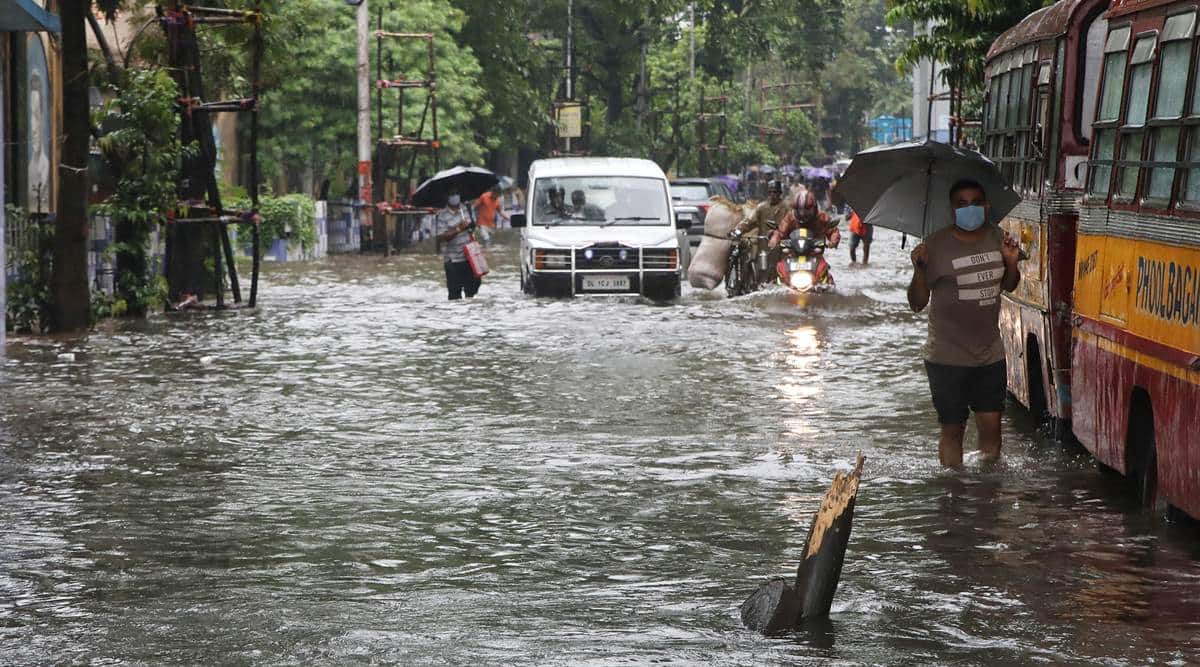 On Tuesday, heavy rain (07-11 cm) is likely to occur at one or two places over Kolkata, North & South 24 Parganas, Howrah and Purba Medinipur . (File)

Kolkata recorded the highest September rainfall in 14 years as incessant rains in the city and its neighbouring districts since the early hours of Monday left several areas submerged and transport services crippled. The Met department forecast more downpours for at least one more day.

At least 11 places in the metropolis received more than 100 mm rainfall. The Kolkata Municipal Corporation’s drainage pumping stations recorded 136 mm of rain in the Dhapa area overnight, 115 mm in Kalighat, and 109 mm in Ballygunge. The other places that recorded heavy precipitation in the 24-hour period were Canning (113.4 mm) and Diamond Harbour (83.6 mm) in South 24 Parganas, and Dum Dum (95 mm) in the northern outskirts of Kolkata, showed Met data. Salt Lake recorded 142.8 mm of rain.

Predicting more rains till Tuesday morning in most districts of south Bengal, including Kolkata, regional Met director GK Das said, “Due to the movement of cyclonic circulation from north-west Bay of Bengal to Gangetic West Bengal and strong moisture incursion, heavy rainfall is occurring over Kolkata and adjoining North and South 24 Parganas, Howrah, Hooghly and Purba Medinipur.”

He added, “The intensity of rain in Kolkata and the adjoining areas will reduce by tomorrow. Bankura, Purulia, Jhargram, Paschim Medinipur and South 24 Parganas are likely to receive heavy rainfall. Fishermen have been alerted not to venture in the sea for 24 hours.”

Barring a few neighbourhoods, almost all low-lying areas in Kolkata were inundated by the evening. Among the worst affected areas in the city and its suburbs were Amherst Street,
he Haldiram junction on VIP Road, Kamarhati, Thanthania Kalibari, Deshapriya Park, Lake View, and New Alipore.

Flight operations in Kolkata were affected, with sources saying that at least three flights — Imphal-Kolkata, Hyderabad-Kolkata and Mumbai-Kolkata — were diverted to Bhubaneswar and Varanasi while several were delayed. The city airport took to Twitter to appeal to passengers to start their journey with enough time on their hands. “Due to heavy rains in Kolkata, waterlogging and traffic congestion is expected. Passengers travelling through Kolkata Airport are requested to allow more time for their journey to the airport and check the flight schedule with the concerned airline,” read the tweet.

With a key poll in Bhabanipur slated to be held on September 30, public representatives were also among those affected. Trinamool Congress (TMC) MP Saugata Roy was seen wading through knee-deep water outside his home in the Lake Gardens area. The rainfall brought the Bhabanipur election campaign to a halt.

“It has been raining here since last night. There were a couple of meetings that I could not attend. I had two to three programs scheduled today and all of them had to be cancelled. It is difficult to prevent waterlogging in such continuous heavy rain,” said Roy.

BJP IT Cell chief Amit Malviya shared a picture of patients sitting on their beds in a waterlogged ward of what he claimed was SSKM Hospital, and tweeted, “While Bengal’s unelected health minister struggles to secure her political future, here is the condition of the antenatal mothers this morning, in the Maternity Ward of Kolkata’s apex SSKM Hospital, situated in Bhabanipur…Mamata Banerjee failed the constituency for 10 years.”