The militants, believed to be six to eight in number and heavily armed, engaged security forces in a fierce gunbattle through Saturday night. 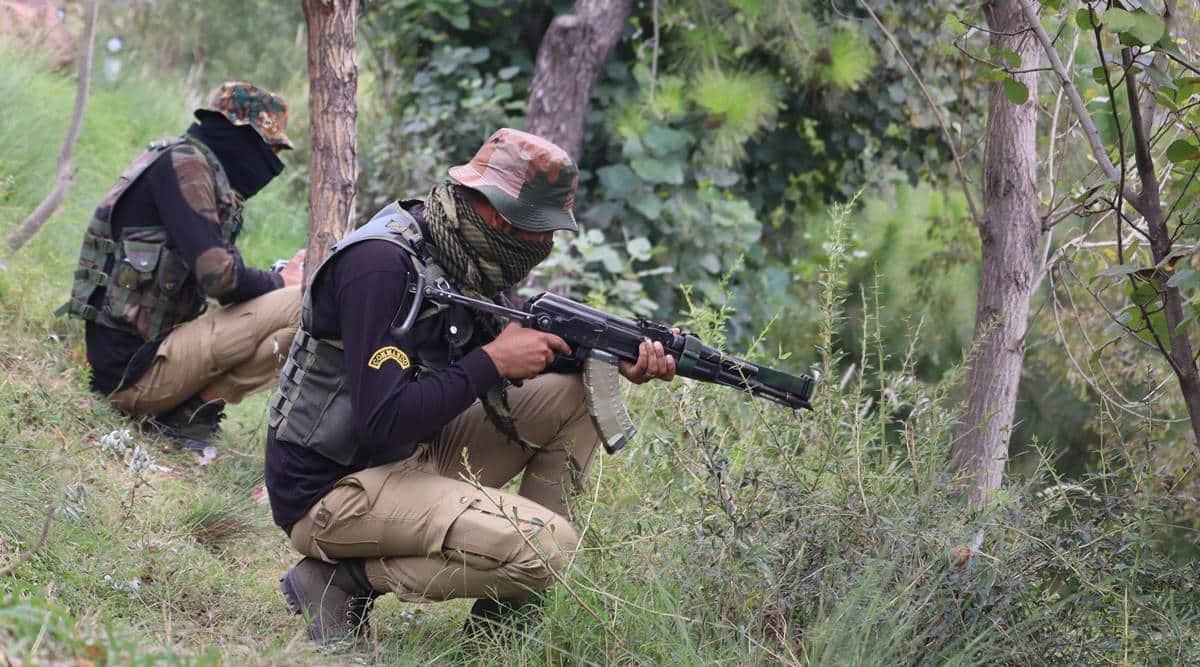 Army personnel at the encounter site in Mendhar, Poonch, on Sunday. (PTI)

Jammu and Kashmir Police detained three locals including a 45-year-old woman and her son at Bhatta Durian on Sunday, as the security forces operation against militants in the dense forests between Mendhar-Dehra Ki Gali-Thanamandi and Bhimber Gali in the border districts of Poonch and Rajouri entered the seventh day.

The three individuals detained for questioning are suspected to have provided logistics support to the militants who are thought to have come from Pakistan Occupied Kashmir (PoK) two and a half months ago, sources said.

The woman has been identified as Zarina Akhter, and her son as Shafait, 19.

Militants do not usually get support from the local population in these districts, which are predominantly inhabited by Jammu region Muslims, along with sizable numbers of Gujjars and Bakarwals.

Many Hindus too live in this area, especially those who were displaced from PoK in 1947.

However, rare cases of an individual or a family helping militants with logistics cannot be ruled out, a senior police officer said. Sources said it was being investigated whether the individuals detained on Sunday had provided food supplies and logistics support to the militants voluntarily or under duress.

The militants, believed to be six to eight in number and heavily armed, engaged security forces in a fierce gunbattle through Saturday night.

The forces used illuminating bombs to light up the area, the sources said, adding that the exchange of fire continued for nearly an hour on Sunday as well.

The dense forest and treacherous terrain were making the operation difficult, the sources said. Para commandos of the Army have joined the operation, and drones and a helicopter are being used for surveillance over the area, they said.

Army sources said the current area of operation in Bhatta Durian was less than a square kilometre of thick pine forest with undergrowth, at least 10 km inside the Line of Control (LoC).

One side of the area of operation descends steeply into a nullah. The routine Army presence in the area is thin.

It is here that four Army personnel including a Junior Commissioned Officer (JCO) were killed on Thursday.

While the bodies of two jawans were found on Thursday evening, the unit waited until daylight on Friday to look for a JCO who had been reported missing, only to realise that one more jawan too, was missing.

It was Saturday morning by the time the body of one of these two men was retrieved from the nullah — and that of the other was found not far away.

Earlier on Monday (October 11), five Army personnel, including one JCO, were killed in an ambush in a place called Chamrel, in a wider 40 sq km area of the same forest, about 10 km east of Bhatta Durian, and in the general area of Sangiot.

With the loss of nine personnel within five days, this has been the deadliest week after for the Army in counter-insurgency operations in Jammu & Kashmir after the 2009 Kupwara operation in which 17 terrorists were killed but eight soldiers including a major also laid down their lives.

The last big encounter in the area was in 2004, when four soldiers were killed, and may raise concerns about the operational readiness of the 17 Rashtriya Rifles, who are deployed in Poonch for counter insurgency operations.

A senior officer in the central security establishment, however, said the deaths of the nine Army personnel was likely more a result of bad luck than poor operational tactics.

“It can happen sometimes. It looks bad, but it can’t be avoided always. Some mistakes have been committed, but that too happens sometimes,” the officer said.

Another officer underlined the challenge posed by the terrain. “The jungles are thick and the terrain difficult. The infiltrators are trained, as they are moving tactically and firing only when required. They are not panicking. Even drones have not been able to pick their location. But the cordon is strong and we should be able to get them in the next 24 hours by all means,” this officer said.

While Army sources said it was not clear if the two incidents on Monday and Thursday (October 11 and 14) involved the same group of terrorists, whether this group was operating as one or had split up into two or more groups, or even how long they had been holed up in the forests, a senior police officer said a 10-member group had crossed over the LoC and made their way into the area as far back as August.

Three encounters took place in the general area of Rajouri in August-September. On August 6, two militants were killed in an encounter in the Pangai forest of Thanamandi; on August 19, in another encounter in the same area, two soldiers including a JCO were killed; and on September 13, one militant was killed in Manjkote in Rajouri.

Sources in the Army said there was nothing yet to indicate whether these three incidents were linked to the incidents of October 11 and 14.

Police sources were, however, confident that this was a chain of events. Vivek Gupta, DIG, Rajouri-Poonch range, said as much on Saturday.

“A joint security grid was tracking different groups of militants but sometimes operations take time depending on the topography of the area. Contact with the militants was established thrice this week based on intelligence inputs,” Gupta told reporters.

The terrorists are holed up, and the joint forces are on the job to take the operation to its logical conclusion, he said.

A tight security cordon has been thrown around the entire forest area from Mendhar to Thanamandi. Combing operations have been launched from several sides, and traffic has been suspended on the Rajouri-Thanamandi-DKG-Buffliaz road and the Rajouri-Bhimber Gali-Surankote-Poonch road, sources said.

For the infiltrators to have remained underground in Poonch for over two months since crossing the LoC is thought to be unusual. For infiltrators headed from the Mughal Road side, the usual layover in the area is two or three days before they cross over the Pir Panjal range to Shopian in South Kashmir.

Army sources said that if the militants had been waiting in Poonch all this time, it could either mean they feared being caught, or an intention to carry out terrorist activities in the Poonch area.

However, the forests in the area are dotted with nearly 15 villages, and it is intriguing that they were able to hide out for so long without the security forces or police getting wind of their location until last week. — (With inputs from Deeptiman Tiwary in New Delhi)