In 8 days, Punjab farmers set fire to paddy stubble on over 1 lakh hectares

Maximum area was burnt in Amritsar district, while maximum number of fire incidents were reported from Tarn Taran district till October 19. 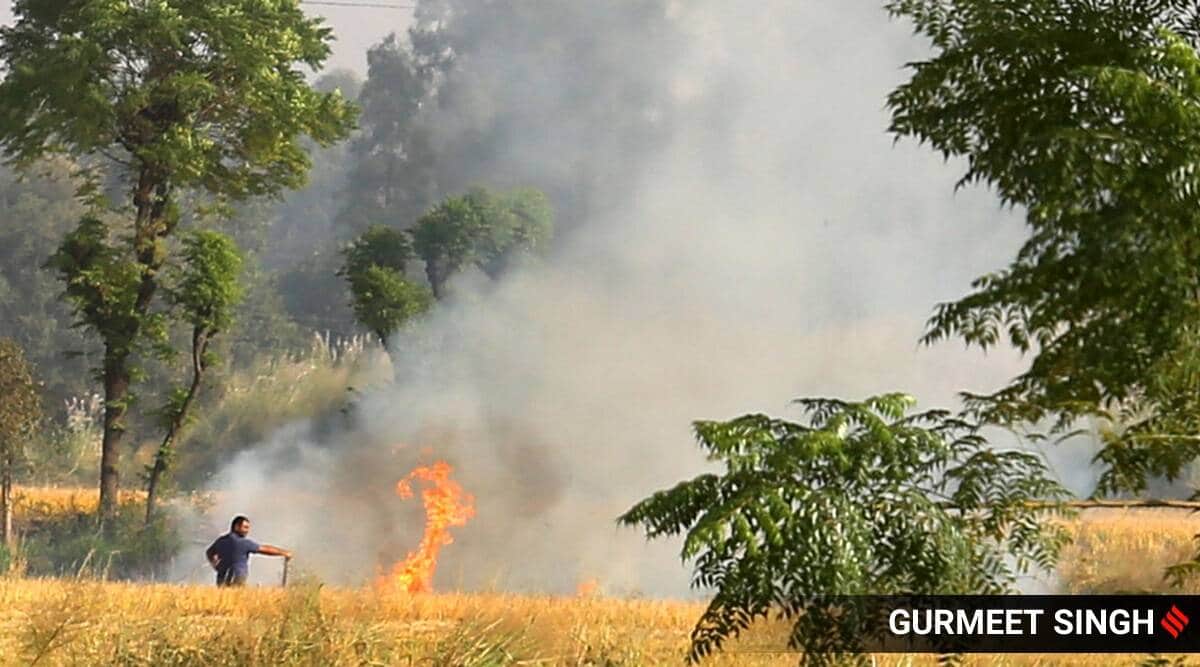 Punjab farmers have burnt paddy stubble over one lakh hectares in just eight days as per the data collected by the Punjab Pollution Control Board (PPCB) through satellite. So far in this season, the state has recorded farm fires over a total 2.11 lakh hectares area till October 19.

While fire incidents are being counted daily, the burnt area report is being collected at a gap of 4-5 days.

Also Read |In just a week, stubble burning in Punjab goes up by 218%

Till October 19, Punjab had completed harvesting on 11.19 lakh hectares out of which 19 per cent area had already been set on fire till that time.

Maximum area was burnt in Amritsar district, while maximum number of fire incidents were reported from Tarn Taran district till October 19.

In Tarn Taran, from where the maximum number of fires incident were reported in this period, the burnt area was 31,000 hectares, including 18,000 hectares between October 12 to 19.

The total harvesting of the district was around 1.28 lakh hectares, which means that district’s burnt area percentage was 24 per cent despite having maximum incidents of fire till that time.

Experts said that burnt area matters because at times the number of fires can be more but area may be less and vice versa. When a large chunk of several acres is set on fire, it is recorded as one fire incident and sometimes small areas are set on fire at scattered places which are counted as separate fire incidents.

In district Hoshiarpur, only 67 fire incidents were reported till October 19, which were at the lower side as compared to several districts but the area under fire was over 7,000 hectares (17,290 acres) including 5000 hectares in just eight days which means large chunk of the land was set on fire at a time.

Similarly in Ludhiana, the number of fire incidents were six times more than the Hoshiarpur in the same period, but area under burning was double to that of Hoshiarpur.

Also in Hoshiarpur district, 30 per cent of the harvested area was set on fire in the same period.

Gurdaspur, Kapurthala  and Jalandhar also burnt over 17,000 hectares, 11,000 hectares and 10,000 hecatres area in the same period, respectively, with a similar trend of burning more in eight days.

PPCB officials said that they are focusing on decreasing the area under farm fires because area matters much more.

They said that Doaba region, which always witnesses lesser fires against Malwa and Majha regions, is potato belt and the sowing of the same is already underway from October 1 because of which several potato growers are setting fields on fire at the moment.

Meanwhile, the area under fire is less as compared to the corresponding period last year but increasing fires in the past couple of weeks will pose a major challenge.

“It is not right to make any conclusion right now when around 45 to 46 per cent harvesting is still left in the state,” said Agriculture Department officials, adding that the number of fires may be less at the moment compared to last year but in stubble burning only final picture matters.

Punjab crossed the figure of 10,000 stubble fires on Saturday when 1,373 more fires were reported with Tarn Taran still tops the list. A total 10,229 field fires were reported in the state till October 30 including 1958 fires at Tarn Taran , 1109 fires in Amritsar, 833 fires in Patiala, 786 in Ferozpur, 645 in Kapurthala, 641 in Ludhiana and 621 in Faridkot. Remaining 17 districts have reported between 100 to 500 fires barring Pathankot, Rupnagar, Malerkotla and Mohali where less than 100 fires have been reported so far. In Pathankot just one fire was reported till date.

A list of 10 of the spookiest films for you to watch this Halloween: Hereditary, Sinister, The Power, and others