Of the 15 names who were sworn in on Sunday to the Ashok Gehlot government, seven come from the SC/ST category including four SC and three ST MLAs. 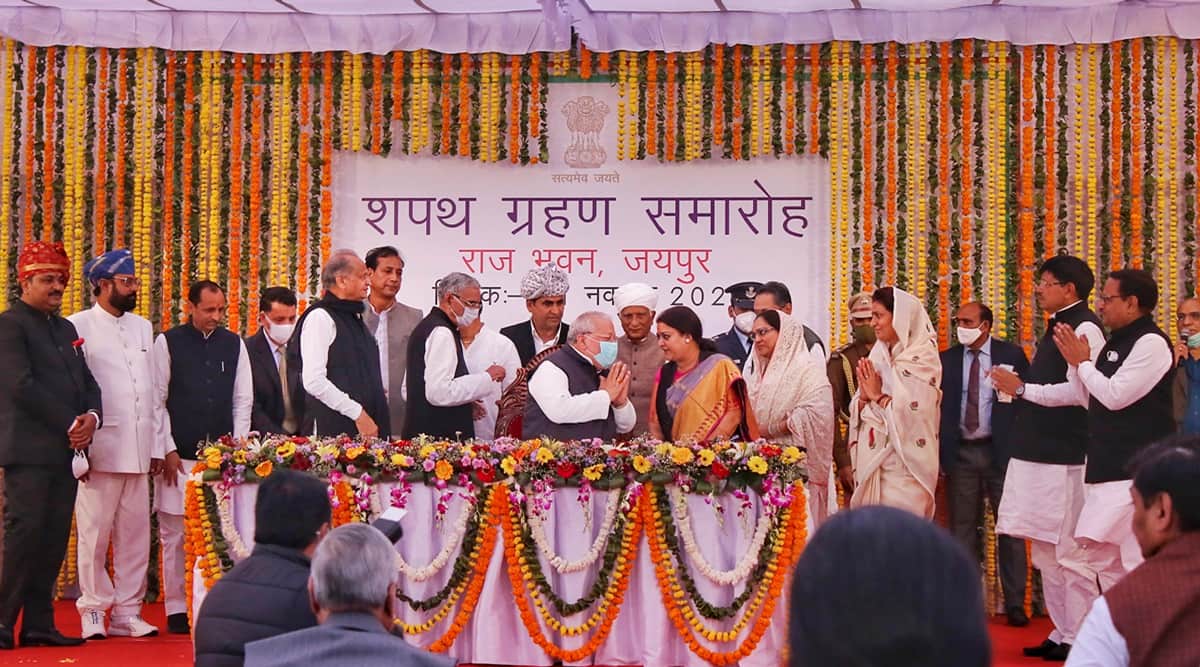 FIFTEEN NEW ministers took oath Sunday at Raj Bhawan in Jaipur and the Congress party’s message throughout the day was to put up a united front and keep the house in order in the run-up to the 2023 Assembly elections in the state. The new faces in the Rajasthan Council of Ministers include four Dalits, three tribals, and three women, one among whom is from the minority community.

Earlier in the day, former Deputy Chief Minister Sachin Pilot, who had led a rebellion 16 months back, was at pains to emphasise there were “no factions” and pointed out that the party reached the halfway mark by collectively contesting the 2018 polls. State in-charge Ajay Maken too said with the reshuffle, party workers should now aim to break the “tradition of the last few decades in 2023 and get the Congress party re-elected”.

On his part, Chief Minister Ashok Gehlot said, “The public should know that the Congress has resolved that it will repeat the government this time around. If we give good governance, the government will be elected once again.”

At a press conference at his residence, Pilot repeatedly said there was no division or factionalism in the party. Striking a reconciliatory tone, with the underlying message that he wished to move on from mid-2020 when he had rebelled with 18 other Congress MLAs, he said, “Raising this issue (factionalism) every time in the media…I don’t know who underlines this issue…The entire Congress party is working under the leadership of Sonia Gandhiji, Rahul Gandhiji and Priyanka Gandhiji.”

Referring to Sunday newspaper reports which said five of his men had found a place in the 15, Pilot said, “Aaj main subah akhbaar padh raha tha ki iss gut ka do, iss gut ka paanch, uss gut ka pandrah (Today’s morning newspaper said two of this faction, five of this faction, 15 of that faction)… During the 2018 elections, when I was the state president of the Congress party, all of us had collectively distributed tickets, contested elections, helped each other, and from the figure of 20-21 (MLAs in 2013), we reached the halfway mark and touched the figure of 100 (MLAs in 2018) and our government came into power.”

At a tilak ceremony for 15 ministers at the party’s state office before they headed to Raj Bhawan, Maken and Chief Minister Ashok Gehlot too focused on 2023 polls. To achieve this with multiple power centres in the state, the party high command has apparently decided to appease and “adjust” as many MLAs as possible somewhere in the government. This may lead to another set of resignations and a reshuffle in the middle of next year, sources say.

Days ago, the party’s Gujarat in-charge Raghu Sharma, Punjab in-charge Harish Chaudhary, and state president Govind Singh Dotasra had resigned as ministers. The three resignations were accepted by Governor Kalraj Mishra late on Saturday. Maken “thanked” the three for resigning and said “khud ministry pad ko thukra ke sangathan ke kaam me aagey barhey, (they themselves offered to resign and worked for the party) we are proud of you.”

A crucial part of the strategy with two years left for the Assembly polls is to take as many MLAs along as possible, and to empower them. “When we prepare more for the 2023 elections…we will try that some (among the ministers) who want to work for the organisation work for it so that we can give more opportunities to new people as ministers,” he said.

Maken emphasised that the party “remembers” when someone does “tyaag aur tapasya (sacrifice and penance)” for the party and cited himself as a “living example”. He said he was a cabinet minister in the Manmohan Singh government when “I was asked by the Congress president to work for the party. I left the cabinet and became a general secretary in the Congress. The Congress party remembers who leaves their ministerial berth, and other such positions, and works for the party.”

The party’s decision to take everyone along is best reflected in the new inductions and what is expected going ahead: Gehlot will now have the maximum possible ministers under him: 29. Later Sunday evening, six MLAs were named Advisors to the Chief Minister. Appointment of about 15 others as Parliamentary Secretaries is on the anvil. This alone will cover 51 MLAs. MLAs still left after these assignments will be adjusted in Boards and Corporations. Of the six who were made advisors, three are from Congress and the remaining three are independents.

Gehlot said that “Those who couldn’t become ministers, their role hasn’t been any less in the government.” In a nod to those who supported his government during its worst ever crisis, he said, “When we were in crisis, we worked, koi kami nahi rakhi. They stayed with us for 34 days, be it independents, or those who had come from the BSP, or those in Congress. We cannot forget them; I am aware of this.” So far, he has only included former BSP MLA Rajendrasingh Gudha in his cabinet, while independents have been kept out.

Assuring them, Gehlot said, “We should welcome the decision. Those who are left, we will get them adjusted.” He quoted Sonia Gandhi as saying at one of the AICC meetings that “workers should be patient and those who have patience get the charge sooner or later. And I agree.”

And in a bid to pre-emptively assuage any angry voices within the Congress party, he indicated that it has been not up to him but the party high command to decide who gets what, “I have been seeing from Indira ji’s time that Congress high command decides, and it has to be accepted till the bottom. This is our great strength.”

State president Dotasra termed the decision by the party high command as “shaandaar and jaandar (wonderful and powerful) for all of us. It is being appreciated everywhere.” While some within Congress had been apprehensive about the fallout within the party after the reshuffle, Dotasra chose to say it through BJP, “The Opposition doesn’t have words, they kept repeating that when there is a reconstitution, this government will fall.”

Pilot too said that the inductions will send a “good message” across the state. “Since there was no representation of Dalits in our government for some time, now not only that has been compensated but in good numbers cabinet rank has been given to people from the Dalit community and they have been inducted in the council of ministers. The sections which always stood with the Congress party have been given proportionate representation and participation,” he said.

“We had raised these issues several times and I am happy that the Congress party, Sonia Gandhiji, high command and the state government took cognisance of it and completed whatever shortcomings were there and have sped up the process towards the direction we were moving,” he said.