Parades 4 MLAs, wonders why Modi, who is in his second term, is trying to usurp more power by toppling democratically-elected state governments 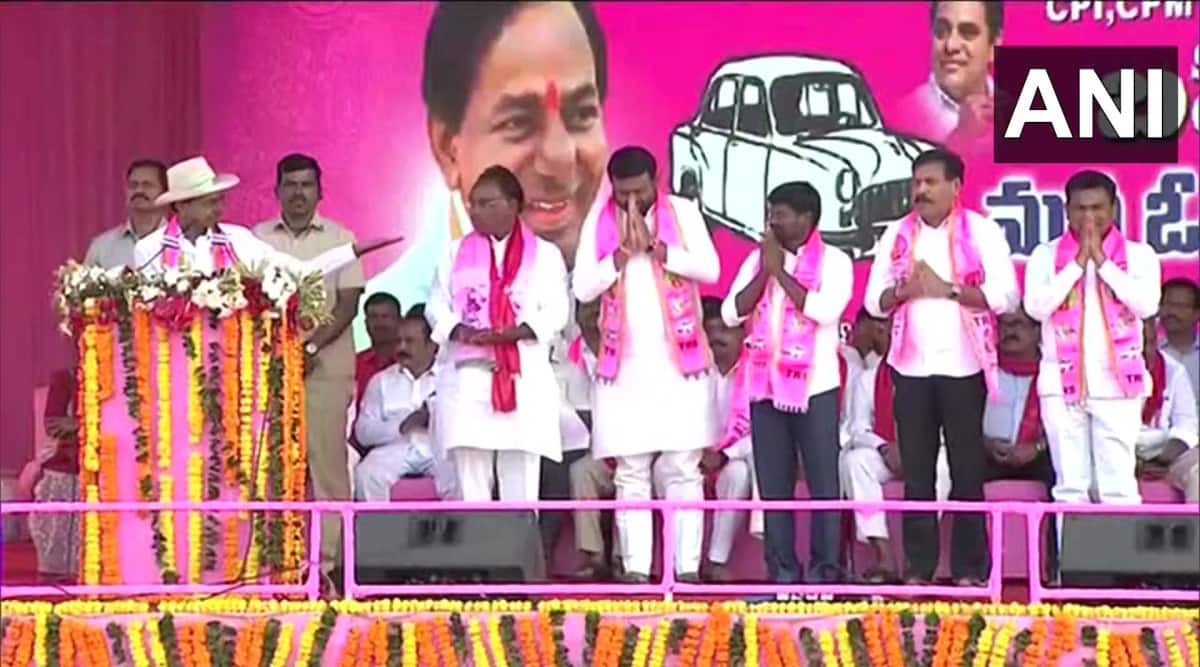 Telangana Chief Minister K Chandrashekar Rao on Sunday made a scathing attack on the BJP alleging that it conspired to topple the Telangana Rashtra Samithi (TRS) government by trying to purchase its MLAs. Speaking publicly for the first time after Cyberabad Police arrested three persons for allegedly trying to bribe four TRS MLAs at a farmhouse in Moinabad on Wednesday night, at a meeting at Munugode, KCR said “Telangana’s self-respect is not for sale”.

The CM, who has never campaigned in the previous bypolls at Dubbaka, Huzurabad and Nagarjuna Sagar, held his first public meeting at Munugode where a bypoll is due on November 3 and played up the ‘Telangana sentiment’.

Parading the four MLAS – P Rohit Redy, G Balraj, Harvardhan Reddy and R Kantha Rao – at the public meeting, KCR said, “These four MLAs of my party are with me. They refused crores of rupees offered to them by brokers sent from Delhi to switch loyalties. This is Telangana’s flag of self respect. These are the real leaders in politics.”

The TRS supremo hinted that BJP’s top leaders were involved in the “operation lotus” to topple his government. Alleging that the operation to lure the four TRS MLAs was done with support of Prime Minister Narendra Modi and RSS, KCR asked why the PM was encouraging defections of elected members of other parties and added that such kind of politics is not good for the country.

“They came to buy our self-respect but they are now in jail,’’ he said. KCR said that Modi is the Prime Minister of the country, which is a huge achievement for anyone as there is no other post higher than that in the country. He wondered why Modi, who is in his second term, is trying to usurp more power by toppling democratically elected state governments. “Why this cruelty towards state governments? How much more power do you require, and did this happen without your knowledge? Those who work for you and RSS leaders came to Hyderabad to conspire and topple my government, but they are in jail now,” he said.

In his typical style, KCR cracked a joke asking people to ponder over the bribery scandal, and vote wisely and said “if donkeys are feed grass for milking cows, you won’t get anything.’’

KCR also attacked the Centre and Modi for imposing 5 per cent GST on handlooms. A large number of handloom weavers live in Munugode constituency. “Modi is punishing everyone with taxes and GST. Why should you or anyone vote for the BJP? he asked.