The airport corridor of 31 km will start from Mindspace junction and end at Rajiv Gandhi International Airport in Shamshabad. 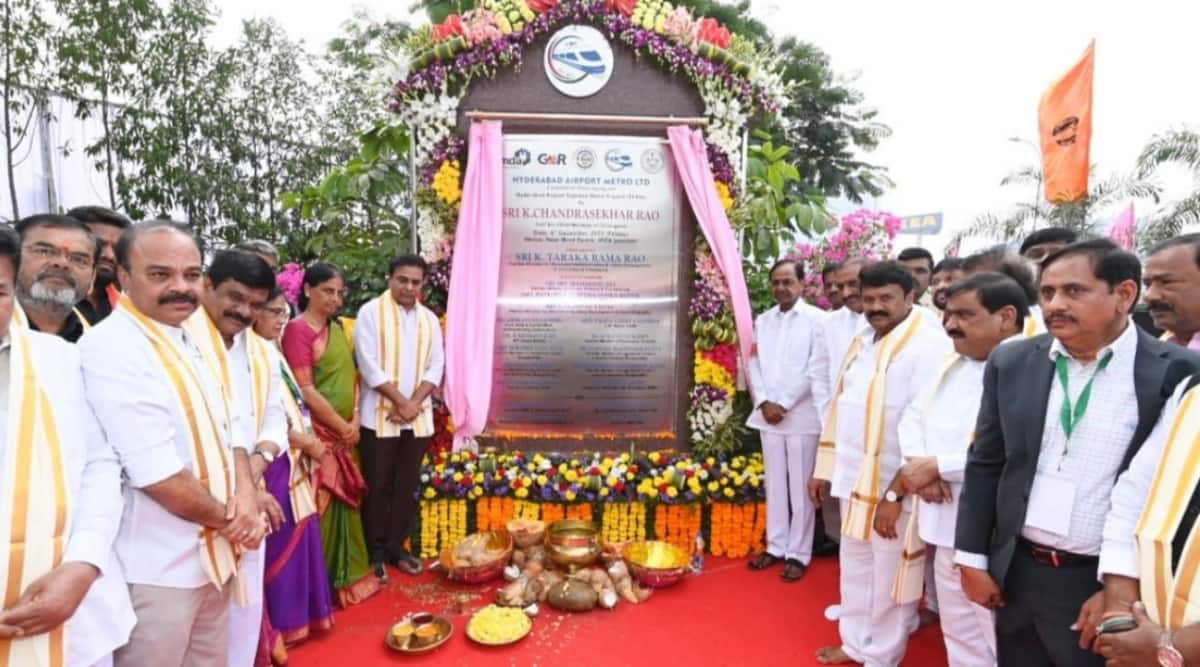 Telangana Chief Minister K Chandrashekar Rao Friday said that the state government can go ahead with the expansion of metro rail corridors across the city, whether the Centre supported it or not. Rao was addressing a gathering at Telangana State Police Academy grounds in Rajendranagar after laying the foundation stone for Hyderabad Airport Express Metro Corridor at Mindspace junction near the Raidurg metro station.

Also Read |We want Hyderabad Airport Metro to be better than Hong Kong and Gatwick in terms of experience: HMRL MD

The state government had recently announced the 31-km corridor at Rs 6,250 crore, which will be fully funded by itself unlike the existing metro corridors crisscrossing the city. Hyderabad Airport Metro Limited (HAML) is a special-purpose vehicle and a joint venture between Hyderabad Metro Rail Limited (HMRL), Hyderabad Metropolitan Development Authority (HMDA) and Telangana State Industrial and Infrastructure Cooperation (TSIIC).

The state government recently announced its decision to go ahead and build the airport corridor with its funds, without any financial commitments from the centre or private party as was in the case of existing city metro corridors. Planned at Rs 6,250 crore, the airport corridor of 31 km will start from Mindspace junction and end at Rajiv Gandhi International Airport in Shamshabad.

This project is different from the proposed phase 2 of HMRL – a 26-km long elevated metro rail from BHEL to Lakdi ka pul and a 5-km stretch between LB Nagar to Nagole terminal stations – at an estimated cost of Rs 8,453 crore. This is being planned as a jointly owned project of the Union and Telangana governments with external financial assistance. Hyderabad Metro is the largest public-private partnership in metro rail across the world and, at present, the Hyderabad Metro Rail Ltd (HMRL) and the L&T Metro Rail Hyderabad Ltd (LTMRHL) operate three corridors covering 69 km.

#Airport Metro trains will start from a #new station beside existing #Raidurg #HMRL station. Air passengers will be able to check-in and part with their baggage at this station itself and reach #Boarding gates directly: says @md_hmrl @IndianExpress https://t.co/0JRK0Vymuo

As for the airport corridor, 27.5 km of the total 31 km is going to be elevated metro while 2.5 km in the airport area will be underground and about 1 km will be at grade or road level. With eight to 10 stations proposed, the airport metro will run at a maximum speed of 120 kmph to cover the entire 31 km stretch in 26 minutes. As per the proposal, the airport metro corridor from Mindspace junction will pass through biodiversity junction, Khajaguda road and reach Nanakramguda junction before proceeding to the Outer Ring Road (ORR) where there is a dedicated Metro Rail Right of Way (RoW) till Shamshabad.