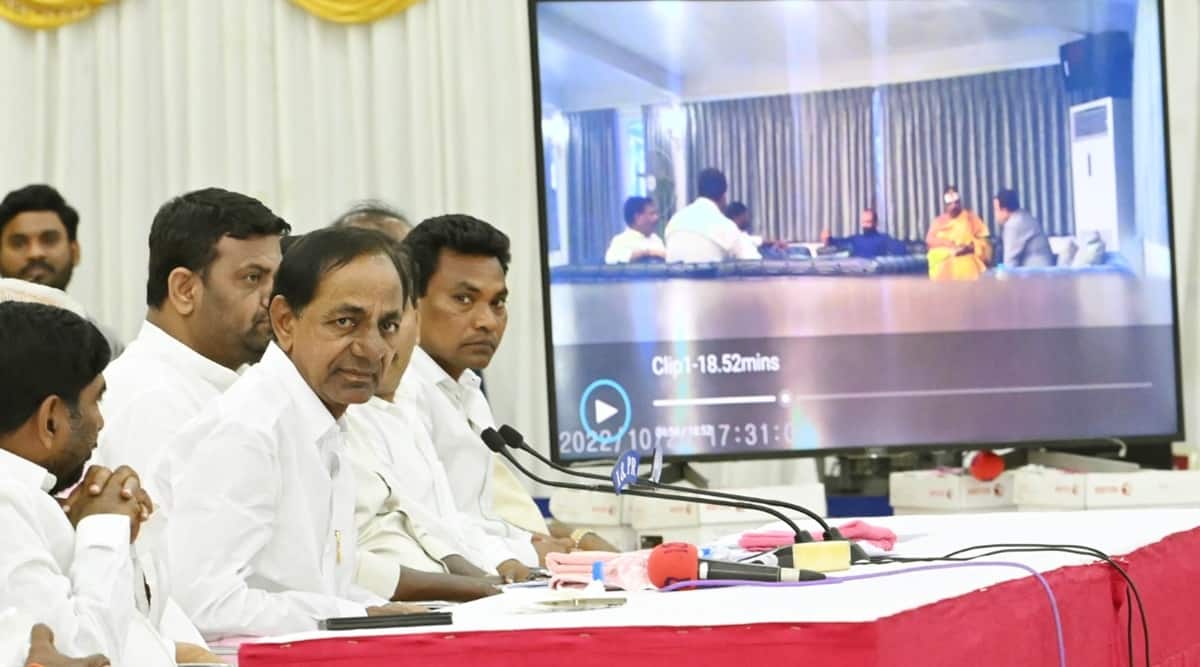 Telangana Chief Minister K Chandrasekhar Rao, soon after voting for the Munugode bypoll concluded on Thursday, called for a press conference and released footage to support “poaching” claims by his MLAs in a bid by the BJP to topple his government.

The CM said that similar attempts to topple Opposition governments were also being undertaken in Delhi, Rajasthan and Andhra Pradesh and that the “conspirators” have been successful in eight previous instances since 2015.

Rao added that the evidence, including a 3-hour-long footage from the farmhouse that has been submitted before the Telangana High Court by the prosecution, is being sent to the Chief Justice of India, Chief Justice of all High Courts, Chief Ministers, Director Generals of Police of all states, CBI, ED, presidents of all political parties and media houses to explain the seriousness of the matter.

Apart from the three arrested accused — Ramachandra Bharathi of Haryana, D Simhayaji of Andhra Pradesh and Nanda Kumar of Hyderabad — Rao also named one Tushar from Kerala as a key conspirator. He said that Tushar had contested on an NDA ticket against Rahul Gandhi in Wayanad in the 2019 polls and was introduced by Union Home Minister Amit Shah himself.

“These people are offering Rs 100 crore each, immunity from ED and IT, and Y category security. They mentioned Modi’s name twice and Shah’s name at least 20 times. They say either Godi or ED. Who are these people and how do they have such money? This should be investigated and PM Modi should lead the way,” Rao said.

According to him, the accused even told the four TRS MLAs that the BJP government at the Centre prevail as long as EVMs were being used. Rao also shared copies of Aadhaar cards, pan cards etc of the accused and that they used different names to commit financial fraud to buy MLAs. 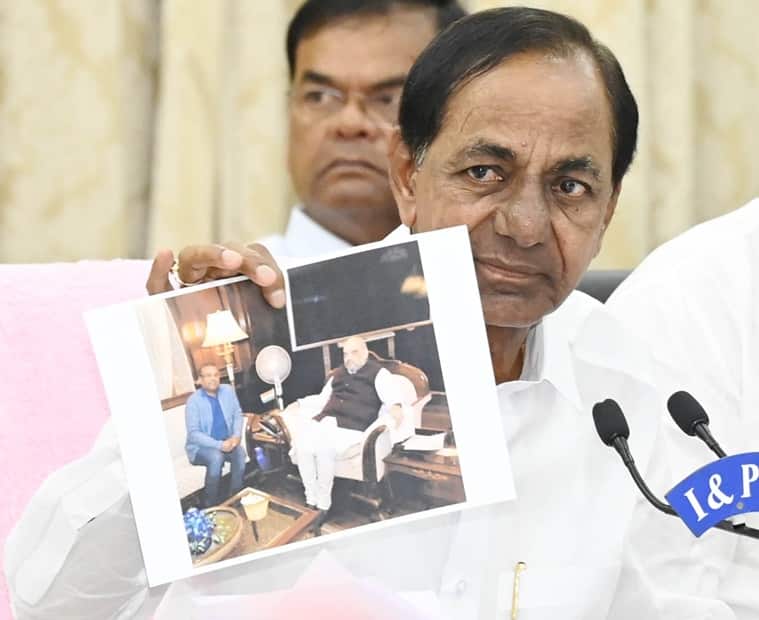 Saying that these actions were a threat to the largest democracy in the world, Rao showed a video from Prime Minister Narendra Modi’s public meeting during last year’s West Bengal polls where he stated that 40 of CM Mamata Banerjee’s MLAs were in touch with him.

“I am your political colleague, Modiji, and I am holding a constitutional position. Honour the people’s mandate and stop toppling democratically elected governments. You have won twice. Do good and earn a good name so that you are remembered. The accused are taking your name and Amit Shah’s name. Don’t stoop so low. Please take action against the culprits and rise above politics to save democracy,” the CM said.

He added: “The Judiciary of the country has come to the rescue of democracy whenever there was a crisis. The accused here have taken the names of PM Modi, Amit Shah, BJP president JP Nadda, and other senior leaders like BL Santosh to gain the trust of the MLAs. My appeal to all is to not treat this as a one-off case. This has been going on since 2015. A 24-member gang is operating to topple non-BJP governments. They proudly say they have already topped 8 governments and that Telangana, Delhi, Rajasthan and AP were the next.”

Rao said he will launch a movement similar to that of the “JP movement” to safeguard India’s democracy. “It’s unfortunate that the BJP, in eight years, has destroyed the nation. Democracy is at stake today. Such a situation is undesirable when there are pressing issues such as unemployment, inflation and economic crisis. I urge the Judiciary with folded hands to save the country,” he added.

Shah Rukh Khan’s fans bring his birthday party to theatres as they sing and dance while watching DDLJ. Watch inside videos