I get 2-3 kg of gaali daily, turn it to nutrition: PM targets TRS in Telangana

Addressing BJP workers at the Begumpet airport here, Modi told them not to be troubled by the frequent attacks on him. “Doosre din kamal khilne wala hain, is khushi mein aage baadiyan (Move ahead with the happiness that the lotus [BJP's poll symbol] will bloom the next day),” he said. 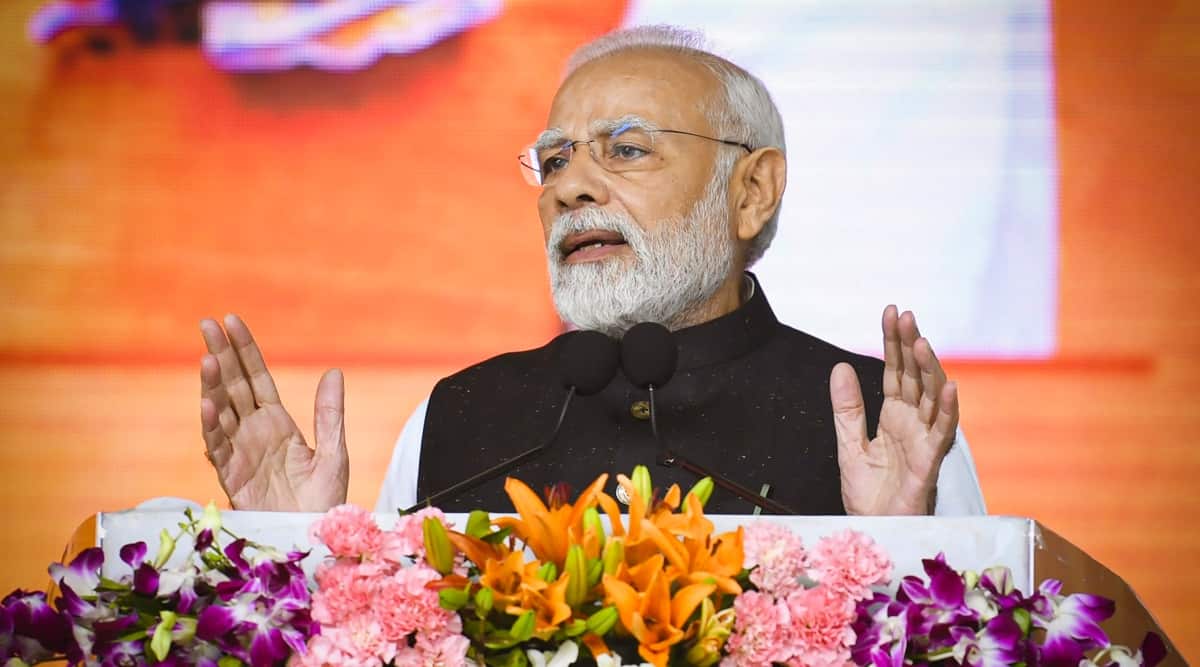 TARGETING THE ruling Telangana Rashtra Samithi (renamed Bharat Rashtra Samithi), Prime Minister Narendra Modi said on Saturday that it was focussed on abusing him and the BJP instead of working towards development of the state. In contrast, he said, the BJP was coming with a “positive agenda” to Telangana, where Assembly elections are due next year.

Saying that he consumed “do kilo, dhai kilo, teen kilo gaali” (two, two-and-a-half, three kg of abuses) daily, he added that he could “digest” this, and “convert” it to “nutrition”. He, however, warned that those who abuse the people of the state would have to pay a heavy price.

Addressing BJP workers at the Begumpet airport here, Modi told them not to be troubled by the frequent attacks on him. “Doosre din kamal khilne wala hain, is khushi mein aage baadiyan (Move ahead with the happiness that the lotus [BJP’s poll symbol] will bloom the next day),” he said.

AlsoRead |Road to 2024 | As Modi makes the poll contest personal, can Congress keep the focus on issues?

“Agar aap Modi ko kitni hi gaaliyan dijiye, hum hazam kar jayenge. BJP ko gaali dijiye, humme koi samasya nahin hain. Lekin agar Telangana ke logon ko gaali di, toh lene ke dene par jaayenge (No matter how much you abuse Modi, I will digest it. I have no problem if you abuse BJP. But, if you abuse the people of Telangana, you will pay a heavy price),” he said.

“Today, I want to assure the people of Telangana, that the BJP is coming to Telangana with a positive agenda. We will work for development together,” he said.

Referring to the Munugode bypoll results, where the TRS won but the BJP stood second, Modi took potshots at the TRS, saying the BJP has become so powerful that the entire state government had to camp in the constituency for just one Assembly bypoll.

“Family is not first, people are first for BJP. I see that the conditions are favourable for the lotus to bloom in Telangana. BJP is ready to come to power and end the rule of corruption,’’ he said.

The PM, who arrived at Begumpet airport from Visakhapatnam, was received by Governor Dr Tamilisai Soundarajan and Minister Talasani Srinivas Yadav as the Chief Minister stayed away.

In Visakhapatnam, Modi unveiled a plaque for laying the foundation stone of five projects: construction of the six-lane Raipur-Visakhapatnam economic corridor, modernisation of the Visakhapatnam fishing harbour, redevelopment of the Visakhapatnam railway station, a separate port road, and laying of the GAIL pipeline from Srikakulam to Angul in Odisha. He also dedicated two highways and the ONGC offshore deepwater project to the nation.

After addressing party workers at Begumpet airport in Hyderabad, Modi proceeded to Ramagundam to dedicate the Ramagundam Fertilisers and Chemicals Ltd to the nation, and lay the foundation stone for national highway and railway projects.

In Ramagundam, Modi said the Centre has no intention of privatising Singareni Collieries. “Telangana owns 51 per cent stake while Centre holds 49 per cent stake. Any decision has to be taken by the state government only. Some people in Hyderabad are spreading false information,” he said.

Supreme Court flags ‘sealed cover’ again, says it is vague, opaque. What is this practice frequently seen in courts?