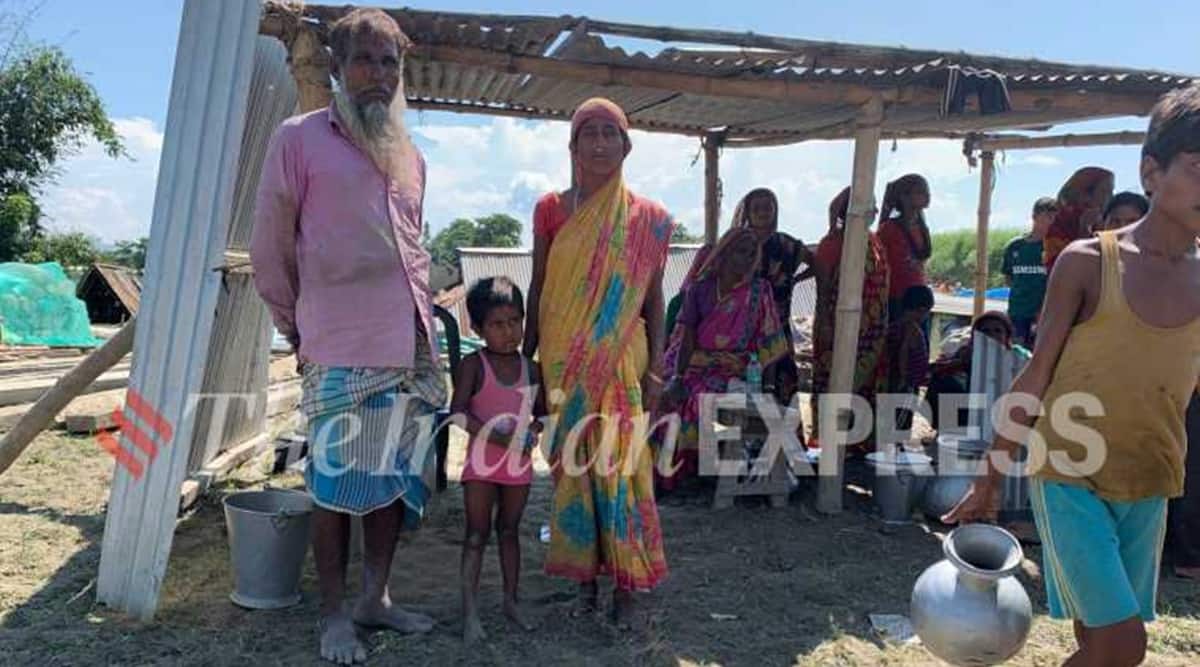 Harmuz Ali and Sahara Khatun in front of their shelter, after being evicted. (Express Photo)

Utensils, a bundle of clothes, a few packets of moori (puffed rice), a rickety bench and a tin sheet overhead — since Thursday, that’s what makes up Harmuz Ali and Shahana Khatun’s home for their family of five. “If you can call it a home,” says Khatun quietly, her four-year-old on her lap, sweating in the scorching heat.

On Wednesday night, when the notice came from the district administration, Harmuz and Khatun, and their neighbours, had immediately begun gathering their things. By morning, the JCBs arrived, and families, including theirs, carried what they could to the patch of land allotted by the government to them across the small tributary of the Brahmaputra that runs across Dholpur 3 village.

Since then, it has been, in Harmuz’s words, “as good as being dead”. “We have barely eaten or slept.” Under tin sheet after tin sheet, lie similar remnants of home, with an occasional Godrej steel almirah a sign of relative prosperity.

Most families claim they had bought land at the plot. Many transactions though happened without documents, and hold little legal validity.

Zamiron Nessa, 25, says her husband moved here after his home was “eaten up by the river” in Goalpara. Harmuz Ali claims he shifted back in 1979 from Barpeta, following erosion by the Brahmaputra. “My father bought the land for Rs 10,000,” he says.

Khaleque Ali says it doesn’t matter whether they have papers or not. “It’s just that we are Miyas (Bengali-speaking Muslims), and they think we are Bangladeshis.”

On Friday, with police gone, many were trying to retrieve what they could from their old homes –pressure cookers, cupboards.

About Thursday’s violence, people insist they had organised a “peaceful protest”. “We requested better rehabilitation and other facilities. The administration agreed and said they will put the eviction on hold, till they arrange it,” says Idur Ali.

However, a short while later, the JCBs were at work. “One young girl was trying to hold on to a part of her home, when police started hitting her. That’s when everyone got angry. We never attacked, police opened fire on us,” he says.

SP Sarma told The Indian Express Thursday that the locals started the attack.

According to Sahinur, it was the SP, who is incidentally the brother of Chief Minister Himanta Biswa Sarma, who “insisted” that the evictions be carried out. “A clip I received on my phone shows him telling the villagers that it does not matter if ‘the world turns upside down… but you will be evicted’.” CM Sarma had promised to get the Sipajhar land, especially around a temple, cleared during a visit to the area in June, and allot it to “indigenous landless people”.

On Friday, the CM told the local press that as per the land policy, it was agreed that everyone evicted would get 6 bighas of land. “I said that the poor, landless people will get land. But we can’t give land to people who come from Baghbor… Barpeta,” he said. “They have land in their place of origin … How can I give them land? This is not my personal property.”

Barpeta, in lower Assam, is home to a large number of Bengali-speaking Muslims.

Just 14 and in Class 9, Sahinur says it comes down to the “deep-rooted hatred”. “They called us Bangladeshis, so we went for hearings and showed our documents. But even that’s not enough.”

After Thursday’s violence, there were no evictions Friday. Claiming the situation was “totally normal” now, the Darrang SP said that of the 77,000 bighas of “encroached land” in Sipajhar, around 35,000 had been lost to the Brahmaputra. “On Monday and Thursday, about 10,000 bighas was cleared. That covers at least 1,200-1,300 families.” He added that there was “not much left to do”. “We are mostly done in this area.”

But no one in Dholpur 3 believes that the pause is permanent. Harmuz has another worry: “This, too, is government land. It is a matter of time, they will kick us out of here also.”