Rain brings Goa to a standstill, supplies likely to be impacted

With heavy flooding and rising water levels across the state, the Pramod Sawant government declared a holiday for all schools on Wednesday. 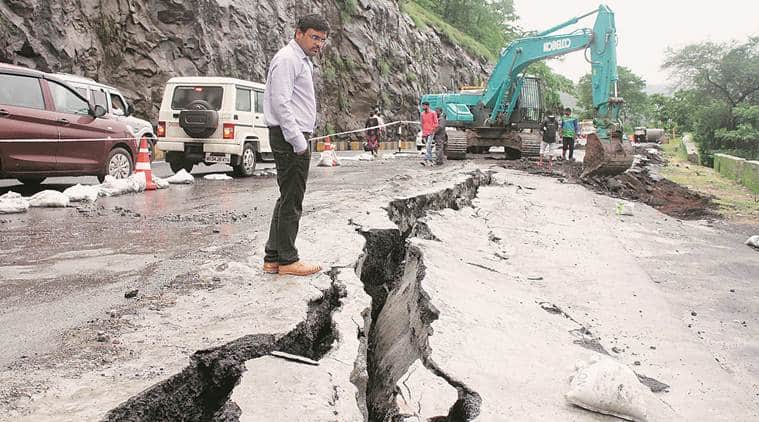 The Mumbai-Nashik highway in Maharashtra’s Kasara Ghat was reduced to a single-lane road after developing major cracks due to heavy rainfall. Meanwhile, heavy rain and flooding wreaked havoc in Sangli and Kolhapur districts, leading to the evacuation of around 56,000 people from affected areas, and the closure of the Mumbai-Bangalore highway between Sangli and Kolhapur. (Express photo by Deepak Joshi)

With rains wreaking havoc across Goa, traffic on the main supply roads connecting northern Karnataka to the state crawled to a stop on Tuesday. This is likely to severely impact the state as a majority of Goa’s supplies come in from Karnataka.

With heavy flooding and rising water levels across the state, the Pramod Sawant government declared a holiday for all schools on Wednesday. Sawant said, “The situation will be reviewed again and a decision made. We have been informed that the rains will continue for three more days.”

Goa and Karnataka are connected by three main supply routes. Two landslides were reported on the Chorla Ghats route, and though the route was opened by Tuesday evening, traffic was reduced to a crawl.

“On Monday night, we got an alert of few boulders falling on the Ghats. Currently entire machinery is monitoring the ghats to check any such repeat as there are many boulders and with the water pressure they could pose a problem. The police, and PWD department and Fire and Emergency Services have been pressed to action,” said Ashok Menon, director of Goa’s Fire and Emergency Services.

Traffic on the Amboli route, via Sawantwadi, Maharashtra, was also affected due to heavy waterlogging.

The full impact of the traffic situation will be felt later this week as Goa gets most of its supplies — vegetables, fish and milk — from markets in Belgaum.

Meanwhile, areas across Goa reported flooding, with the fire department rescuing stranded families. “Earlier in the day, Ghadiwadi, Amona, was flooded… The fire personnel shifted the people and their belongings to safer places…,” said Menon.