On Thursday, Sattari and Bicholim in North Goa and Dharbandora in South Goa appeared to be the worst-hit. But by Friday afternoon, the damage assessment showed that Ponda in South Goa was also among the worst-affected talukas. 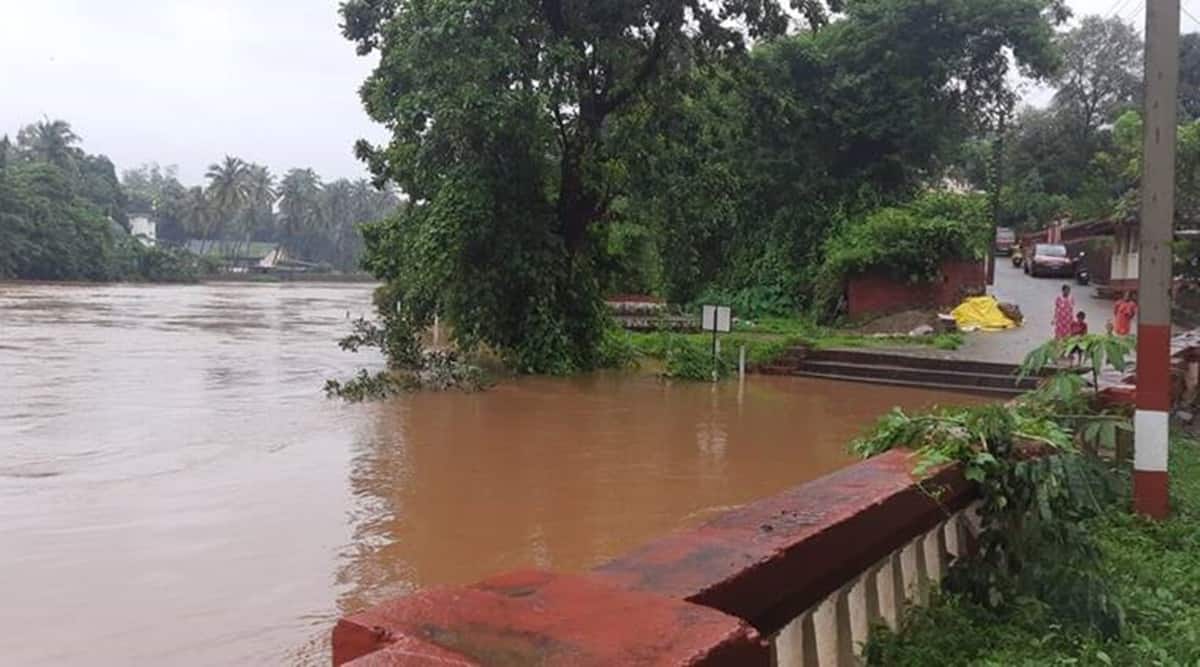 Chief Minister Pramod Sawant said the state was seeing flooding of this magnitude for the first time. (Express photo)

A day after Goa was hit by its worst floods since 1982, water receded from most areas amid spells of moderate to heavy rain in some parts on Friday. Goa Chief Minister Pramod Sawant said 4,000-5,000 houses had been affected by the flooding on Thursday. The government’s assessment showed major damage to over 1,200 houses in nine of the state’s 12 talukas.

On Thursday, Sattari and Bicholim in North Goa and Dharbandora in South Goa appeared to be the worst-hit. But by Friday afternoon, the damage assessment showed that Ponda in South Goa was also among the worst-affected talukas. More than 500 homes were damaged with about 190 people evacuated to safety.

Chief Minister Sawant, who visited villages in Dharbandora on Friday morning, said: “About 100-150 houses (in Dharbandora) were submerged, almost everyone moved to the hilly parts. Our minister (PWD) Deepak Pauskar made arrangements and they were rescued and moved to safety. Many houses were under water, some right up to the roof, and people have suffered huge losses.” He said the government will extend financial assistance to affected people.

“Just when we were coming out of the pandemic, we are now facing new difficulties. The government is always ready to face these challenges. The government will extend all possible relief to the people whose homes have been damaged,” Sawant told a news channel.

During his visit to the Daukond village in Ponda, Sawant urged villagers to vacate their homes if they felt the structures had been weakened by the flood waters. He said the government will arrange their accommodation in its schools or buildings under the district administration.

On Thursday, Sattari and Bicholim in North Goa and Dharbandora in South Goa appeared to be the worst-hit. But by Friday afternoon, the damage assessment showed that Ponda in South Goa was also among the worst-affected talukas. (File)

“I have instructed the Archeological Survey of India to expedite the strengthening work. For now, only a support (structure) will be erected along the damaged wall. After the rains the restoration work will begin,” Kavlekar said. Although the repair and maintenance of the monument comes under the ASI, he said the state government would step in because this concerned the “sentiments of our minority brethren.”

In Sattari taluka — where 21 villages were affected by floods — a bridge collapsed in Paikul after Mhadei river waters rose alarmingly on Thursday.

North Goa Collector and District Magistrate Ajit Roy said that the village had been provided an alternative route to travel — through the Bondla Wildlife sanctuary. As interim measures to restore connectivity to the village, the administration was considering both providing boat connectivity and constructing a makeshift bridge, he said.

Many of the families evacuated on Thursday returned to their homes after the water in their villages receded Friday. Roy said only eight of the evacuated families in Bicholim had stayed put at the accommodation provided by the district administration Friday.

Advertisement
Following the derailment of the train on Friday, 15 other trains were cancelled, three partially cancelled, 16 were diverted and three others were short-terminated. (File)

Meanwhile, the South Western Railway said that the two landslide spots in the Ghat section in South Goa had been cleared of debris, with the tracks being restored for traffic.

On Thursday, a train from Mangaluru Junction to Chhatrapati Shivaji Maharaj Terminus (CSMT), carrying 345 passengers, got derailed between Dudhsagar and Sonaulim in South Goa at about 6:10 am after heavy rain and the overflowing of the Vashishti river between Chiplun and Kamathe in Maharashtra.

Another train, the Hazrat Nizamuddin- Vasco da Gama Express, carrying 887 passengers, was also stopped in its tracks between Caranzol and Dudhsagar owing to a landslide at 6:20 am. It was also being pulled back, to the Castle Rock station in Karnataka.

SWR officials said that the tracks were undergoing final checks on Friday evening before services on the route are restored.

“A speed restriction on 10 kmph has been imposed, temporarily, in view of safety and further monitoring of the spots and nearby locations will be carried out for the next 24-48 hours, very closely,” the SWR said in a statement.