Modi warns tribal community against urban Naxals, BJP against being complacent on Cong

Modi also laid the foundation for several projects and inaugurated several others totally worth Rs 8,200 crore. 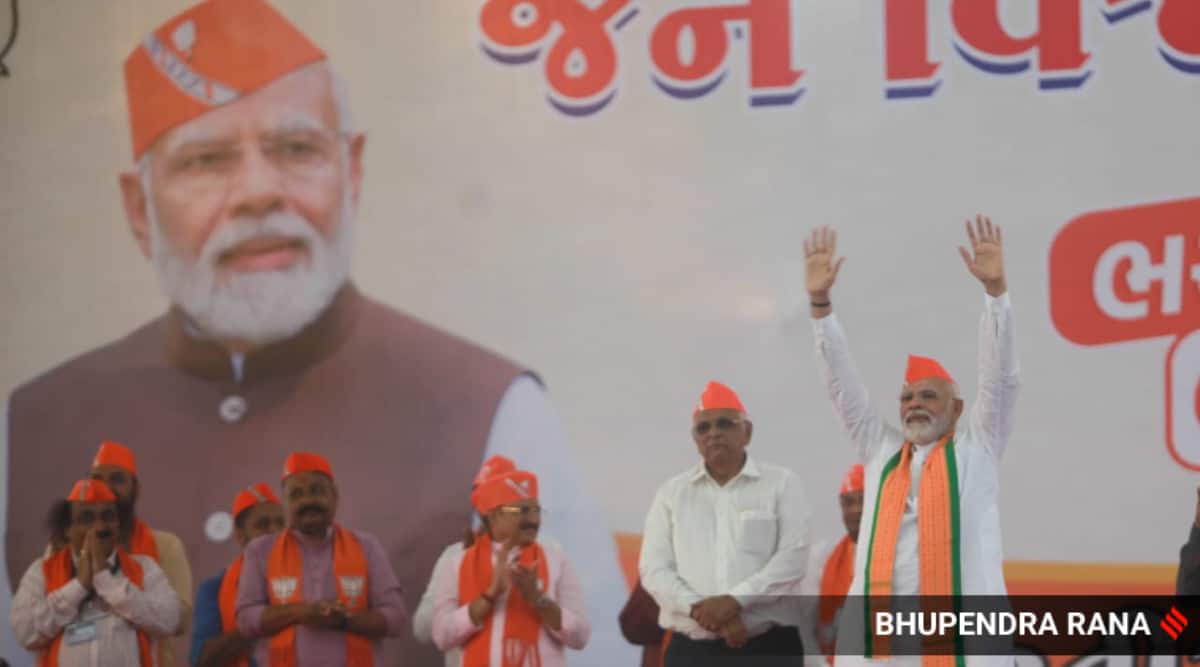 In Anand, Modi invoked Sardar Patel and said that the praise he receives “for doing good work in Delhi” is nothing but “a man following the footsteps of Sardar saheb”. (Express Photo by Bhupendra Rana)

Warning the tribal community against “falling for urban Naxals who have arrived in disguise”, Prime Minister Narendra Modi, in an apparent reference to the Aam Aadmi Party (AAP), said in the tribal-dominated Bharuch district on Monday that “they are bringing foreign powers to ruin your life”.

Later, addressing a party meeting at Vallabh Vidyanagar in Anand district, Modi warned partymen at a Jan Vishwas Sammelan of the BJP, against assuming that the Congress was “finished” and asked them not to be under the “illusion” that they were not doing anything.

Addressing a gathering in Amod, where he inaugurated development projects, the PM said, “I remember the days when some (opposition) people obstructed development of industrialisation in Bharuch… These people, who have Naxal mindset, obstructed the construction of the Narmada dam that was meant to provide clean drinking water and irrigation water to Bharuch… Now, urban Naxals have arrived in disguise…”

Adding that Naxalism began in Bengal and spread to other parts of the country, the PM said, “It has ruined the lives of youngsters… There was a problem all around (the country)… but I (as Gujarat CM), had resolved that my tribal stretch from Umargaon to Ambaji should not come under the grip of Naxalism… I took it in my hands to ensure development here. And my tribal brothers held up my word and stayed away from naxalism… I am grateful to the tribals of Gujarat for this… But now urban Naxals have arrived… Don’t allow your youngsters to fall for them. They are bringing foreign powers to ruin your life. Gujarat will annihilate them…”

Modi also laid the foundation for several projects and inaugurated several others totally worth Rs 8,200 crore. The projects include Gujarat’s first Bulk Drug Park that will come up in Valia (Bharuch), Vanar (Chhota Udepur), Dahod, and Banaskantha, a 106-kilometre deep sea pipeline project in Dahej, an agrofood park in Banaskantha, and a seafood park in Kakvadi Dati, Valsad.

Modi, also laid the foundation stone for an airport in Ankleshwar — Bharuch district’s industrial belt, and said that Bharuch and Ankleshwar would soon have the “same identity as New York and New Jersey twin cities”. He also inaugurated projects of Gujarat Industrial Development Corporation (GIDC) and GACL.

Modi said, “Bharuch is becoming a vibrant manufacturing hub. The new plants that have developed here for chemicals and manufacturing will also benefit the textile industry, which in turn benefits farmers producing cotton… it is the highest employment generating industry. Similarly, fertilisers and chemicals manufactured in Bharuch reach the entire country… The new GACL chemical plant will ensure a turn over of more than Rs 2500 crores, including Rs 700 crore foreign investment. This is one of the acts of desh bhakti… And Bharuch is doing it… ”

“Bharuch has bigger industrialisation than some states put together. It needs an airport. It will increase exports… Bharuch accounts for 25% of India’s pharma exports…” Modi said.

Gujarat has more cosmopolitan cities and towns, indicating an “all-inclusive” progress in the state, Modi said, adding that unlike the previous governments that started loan schemes for tribals to buy “five chickens”, the BJP made professional colleges, increased the number of seats in professional educational institutes, and ensured that tribal children can “pursue medicine, law and fly planes”.

The PM added that it was a moment of pride that India “replaced a country that had enslaved us for 200 years, in the world’s list of fastest growing economies”.

Later, addressing a party rally in Vidyanagar in Anand, Modi warned the BJP workers against becoming complacent on the assumption that “the Congress was silent and doing nothing” for the polls.

“The Congress is too silent, but don’t assume it is finished… They are quietly going around villages to strengthen the ground. Don’t be in an illusion that they are not doing anything (for the polls). They are not holding press conferences or making challenging statements but I have especially found out what they are upto… We have to be alert and not complacent,” Modi said.

At both events, Modi stated that youth in Gujarat aged about 25 years are “unaware of the hardships” that the state was facing when Modi took over as the chief minister.

“I resolved to solve each problem one by one — from drinking water to electricity, to building roads in villages, to setting up schools to enforcing law and order… While neeti (policy) is important, neeyat (intention) is even more important. Policy without intention is of no use… We have sent the rioters and the heavyweight (criminals) behind bars,” Modi said.

Adding that “Gujarat means development, industrialisation, trader, business, prosperity”, Modi said, “BJP in Gujarat means that there is no longer any threat in visiting a temple… my Gujarat can celebrate garba and tazia with equal peace… For youngsters in Gujarat, it is the beginning of the golden era. Don’t miss this opportunity.”

In Anand, Modi invoked Sardar Patel and said that the praise he receives “for doing good work in Delhi” is nothing but “a man following the footsteps of Sardar saheb”.

Attacking the Congress for ignoring the legacy of Sardar Patel and Mahatma Gandhi, Modi said, “All except one state of Kashmir, which another person had taken upon himself to interrupt Sardar saheb’s work… But then, there was one guy, who, walking in the footsteps of Sardar saheb, completed the task of Kashmir and paid a tribute to Sardar Patel.” The PM’s reference on decision to abrogate Article 370 earned big applause.

“If you meet Congress leaders, ask them if they have gone to the Statue of Unity to pay tribute to Sardar Patel… they won’t do it…,” Modi said, adding, “When I took over as Chief Minister of Gujarat, there were dams in the state but no canals to take water to people — like someone would construct a five- storey structure without staircase…”

Modi also advocated for Indian-made firecrackers for Diwali, to boost the “vocal for local” campaign and “brighten the year for many poor families”.