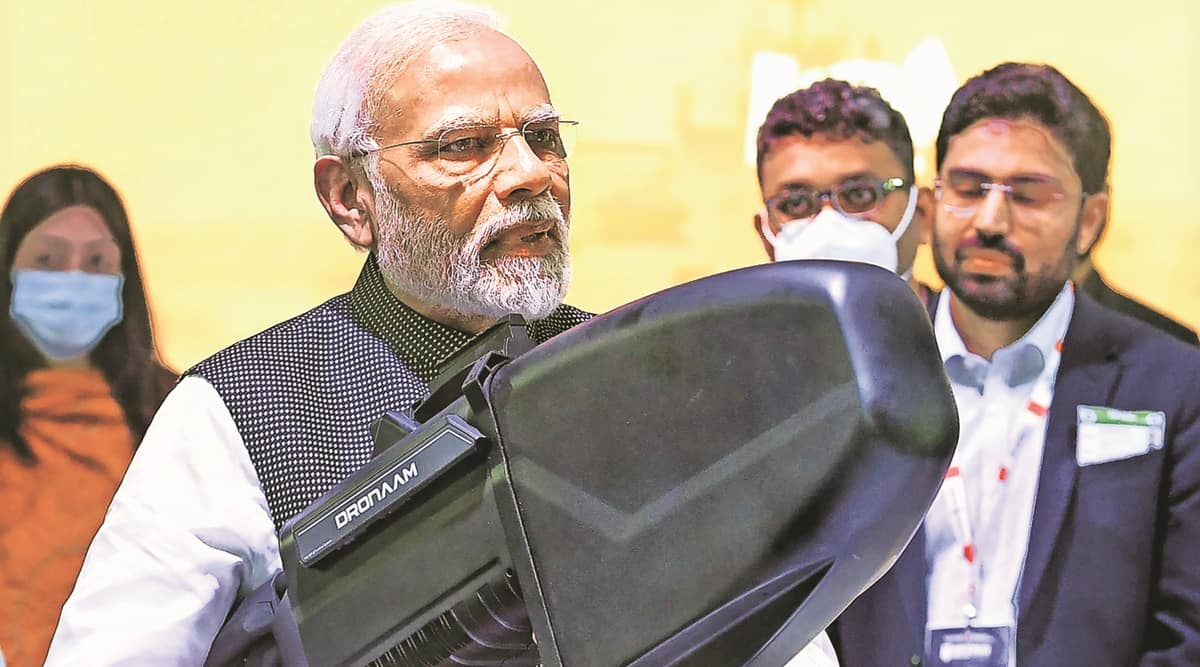 Citing the induction of the indigenously-built Tejas light combat aircraft, light combat helicopters and aircraft carrier INS Vikrant into the Indian armed forces, Prime Minister Narendra Modi said Wednesday that decisions to induct ‘Make in India’ products were not because of “political will”, but due to the “courage” shown by the leadership of the armed forces.

“Change is happening very quickly. There was a time in this country when pigeons used to be released. Now we have the power to release cheetahs,” Modi said in his inaugural address at the DefExpo 2022 in Gandhinagar.

PM Modi and Defence Minister Rajnath Singh, along with other dignitaries at the DefExpo2022, in Gandhinagar, on October 19, 2022 (Photo: Government of Gujarat)

The Ministry of Defence said it will facilitate a conducive environment and render all possible support to the industry to ensure that the timelines mentioned in the ‘Fourth Positive Indigenisation List’ are met.

Items in the list with effect from December 2022 are next generation frigates, mobile disaster relief equipment for humanitarian assistance and disaster relief (HADR) operations, and remote embedded systems support for naval ships.

All items included in the list will be procured from indigenous sources as per provisions in the Defence Acquisition Procedure 2020 and will provide “continuous impetus towards self-reliance in defence”.

PM Modi at DefExpo2022, said, “It is the first such Defence Expo in the country where Indian companies are participating, where there are only Made in India defence equipment.” (Photo: Government of Gujarat)

The Ministry of Defence had earlier promulgated three such indigenisation lists which comprised 310 items. These lists were made public in August 2020, May 2021 and April 2022.

Via virtual mode Wednesday, the Prime Minister also laid the foundation stone for a new IAF air base at Deesa in north Gujarat.

Defence forces will release a list of 101 more items that cannot be imported to India. (Photo: Government of Gujarat)

“The construction of Deesa airfield is a big achievement for the security of the country and development of the region. Deesa is just 130 km from the international border. If our forces, especially the IAF, is at Deesa, then we can give a befitting reply to any recklessness on the western border,” he said.

The Gujarat government, he said, had given land for the airfield way back in 2000. “When I was Chief Minister here, I used to constantly impress upon the then government at the Centre about the importance of the airfield. Nothing happened (during UPA rule). The files (on the project) were left in such a way that even after I reached the (PMO), it took time to set things right,” he said.

The Prime Minister, in his address, praised the defence forces for buying Indian products.

Rupee falls to record 83.02, imported inflation is now a worry