December 16 victim’s mother: ‘Those who commit heinous crimes like rape… their heads should hang in shame, not victims’ Mother of Nirbhaya at a thrid year memorial for the girl who was gangraped, tortured and murdered on December 16, 2012 in a moving bus in New Delhi. (Source: Express Photo by Tashi Tobgyal)

It was an announcement that momentarily silenced hundreds of people who had gathered at Jantar Mantar Wednesday to pay homage to the victim of the December 16 gang rape, on the third anniversary of the shocking incident. It was an announcement by the mother of the 23-year-old unnamed victim, who has often been referred to as Nirbhaya.

“I have no shame in saying my daughter’s name was Jyoti Singh. It is not mothers like me who should be ashamed but the people who commit such atrocities. I am taking her name today and so should all of you,” she said.

After a few moments of surprised silence, her announcement was greeted by loud cheers from the crowd. 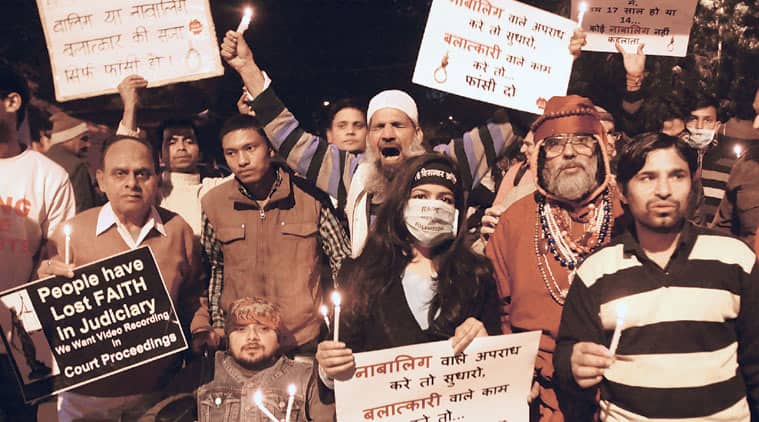 “Those who commit heinous crimes like rape… their heads should hang in shame, not the victims or their families. My daughter’s life was cruelly cut short. I feel angry at that and not ashamed, so why should I try to hide her name,” Jyoti’s mother told The Indian Express.

She said that she had decided to participate in the event to “demand that the public raise their voice” against the impending release of the juvenile found guilty of the crime, along with five others.

“It makes me so angry that on the third death anniversary of my daughter’s death, we are seeing the release of the juvenile. Where is justice in that? I do not know whether he is 16 or 18 years old. I only know that he has committed a brutal crime and there should be no age limit for punishment,” she said.

The family had lost faith in “all governments”, said Jyoti’s father.

“The Centre is delaying the amendment to the Juvenile Justice Bill. Three years ago, AAP and Arvind Kejriwal had taken to the streets to demand safety of women in the capital. What has happened today? I read in newspapers that the state government is helping the juvenile start a new life. We could not have been more disappointed,” he said.

Commenting on the delay in passing of the amended Juvenile Justice Bill, he said that his daughter had not received justice as he was a poor man.

“If I had been a rich man, the accused would not be walking free. Why is the Bill getting delayed? Do you think the government would have cared about these laws if my daughter came from a rich or powerful family? Laws would have changed, rules would be broken but he would not be allowed to walk away,” her father said.

Jyoti’s parents also demanded that the five convicts, including the juvenile, should be sentenced to death, fast-track courts should be set up in all courts to offer speedy justice to victims of sexual assault, the amendments to the Juvenile Justice Bill should be passed and the Nirbhaya Fund should be utilised to set up an advanced forensic laboratory.

Lyricist Javed Akhtar and actor Shabana Azmi as well as representatives of various women’s groups had gathered at Jantar Mantar to pay homage to the girl.

Raksha, who had participated in the protests against the gangrape three years ago, said that she simply had to participate in the protest today. “There has been no change on the streets in the last three years and that is reason enough for me to keep coming back every year,” she said as she lit her candle.