This is transparency, say AAP rebels at Swaraj Samvad

Several AAP members took to the stage, and most stories narrated hurt and disappointment. 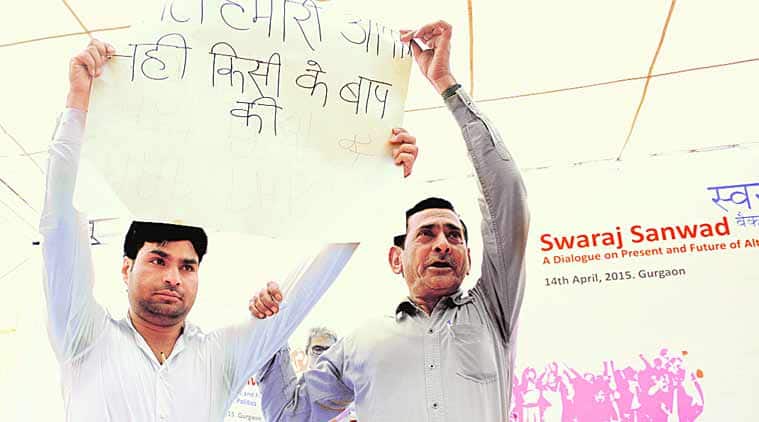 Volunteers at the Swaraj Samvad on Tuesday.(Source: Express Photo by Manoj Kumar)

The signs that this was an event which drew its strength from outside of Delhi, from different sections of the country, were everywhere. On the dais, in the centre were the words “Swaraj Samvad”, to the bottom right was the word “Swarajya”, written in different languages.

At a point in the proceedings, the speaker on stage, like many others, talked of his unhappiness with the “dictatorial attitude” of the Aam Aadmi Party leadership.

But he spoke in Kannada, with a translator who expressed what he said in English, and another in Hindi. All along, at regular intervals, a group of volunteers from Bengal, broke out in chants of protest. “Tanashahi Cholbe Na”, they said, smiling at a group from Tamil Nadu that turned around to look at them. In some hours, Yogendra Yadav would arrive to say that the Arvind Kejriwal-led Delhi government should be given a chance but “the country was very big, and the challenge was to do something positive”.

For many that arrived for the Swaraj Samvad, the point of the event was not only to decide a “future course of action”, but also to display what “consultative procedures” ought to be like. “Can any event be more democratic? Compare this to what the AAP National Council meeting was, and you will see how low the party has reached,” one organiser said.

He pointed to rows of cameras set up by the media, filming everything. As he spoke, groups of attendees at the events formed groups based on where they came from to decide a future course of action. “Later, after all discussions, the matter was put to vote. This is transparency,” he said.

Many functional problems were put to the crowd, such as that they were falling short of money that the event had cost. Soon, a white sheet was passed around, asking for donations from people. At the entrance, five aluminum boxes had also been kept, hoping to recoup that had been spent. In the evening, one of the biggest cheers went up when Anand Kumar announced that they had been successful in the enterprise.

Through the day, several AAP members took to the stage, and most stories narrated hurt and disappointment at “the lies” of the AAP leadership. Vinod M S, district convener from Mysore, for instance told the audience that Kejriwal’s faction had lied when they accused Prashant Bhushan of dissuading volunteers from Mysore to campaign or donate for the Delhi campaign. “The rumours were spread, and, I as district convener, was not even asked about the version of events even once,” he said.