Swaniti Inititaive: Delhi’s women, behind the rest in safety and jobs

The second part of this data series looks at the security of women in Delhi, from a physical as well as social and economic perspectives. Delhi accounts for more than 21 per cent of all crimes against women in cities, with Mumbai a distant second at 5.51 per cent.

The second part of this data series looks at the security of women in Delhi, from a physical as well as social and economic perspectives

Delhi accounts for more than four per cent of all serious crimes against women in the country — including rape, kidnapping, domestic violence, dowry-related crimes and immoral trafficking — though less than 1.4 per cent of Indians live in the city. According to the NCRB report of 2013, Delhi accounts for more than 21 per cent of all crimes against women in cities, with Mumbai a distant second at 5.51 per cent. In 2013, the year following the December 16 rape incident, there was a 55 per cent increase in cognisable crimes in the city (some of this may have been because of greater reporting).

ALSO READ: Money is all city prospers in EMPLOYMENT: The participation of women in the labour force in urban Delhi is also much below the urban national average of close to 20 per cent. This implies that a mere 11 per cent of Delhi’s women aged above 15 years are available and willing to work. Even among the small fraction of Delhi women who do manage to find work, 10 per cent are registered as marginal workers, implying that they do not work for the major part of the year. The male-female gap in labour participation was also marginally higher in Delhi (57.8 percentage points) as compared to the all-India urban gap of 54.3 percentage points. LITERACY: In the case of urban female literacy, there is little to choose between Delhi and the national average. The number of literate women in urban Delhi grew from 75.2 per cent to 81.1 per cent of the total urban female population. The all-India increase was marginally higher, from 72.86 per cent to 79.11. Many other major states such as Maharashtra, Kerala, Tamil Nadu, Karnataka, Gujarat, Himachal Pradesh and West Bengal have equal or better literacy rates among urban women. 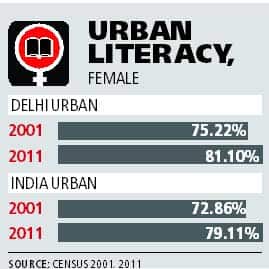 SEX RATIO: Nowhere is the bias against women in Delhi more evident than in the skewed sex ratio, a fact that was publicly acknowledged by former chief minister Sheila Dikshit. According to the latest census, Delhi’s adult sex ratio of 868 (urban) was far behind the national number of 929. Perhaps the only heartening point is that Delhi’s sex ratio improved between 2001 and 2011, even as the national urban ratio worsened from 949 to 929.

As both Arvind Kejriwal and his latest challenger Kiran Bedi continue to highlight the importance of women’s issues, they must ensure that they address the problem holistically, and evolve strategies to reduce the gender disparity in Delhi’s society and economy.

This data series is being published in partnership with Swaniti Inititaive