Sero survey results set to be out today, Capital will get idea of Covid spread

The National Centre for Disease Control (NCDC) is collating the results, and while the official report is yet to be declared, sources said the positivity rate is around 10%. 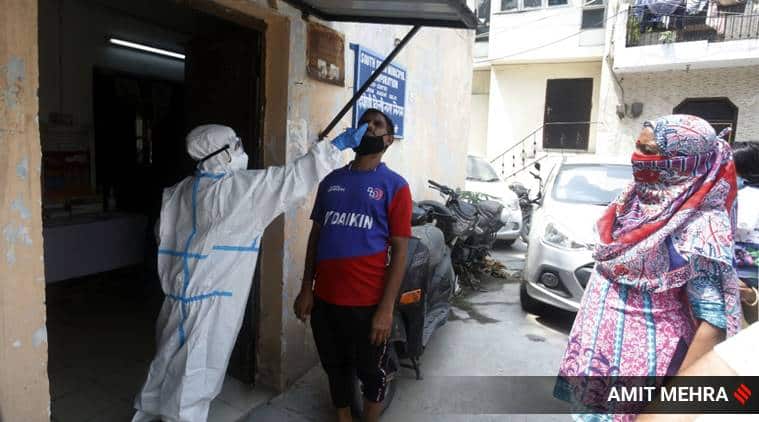 A health worker collects a sample of a man for COVID-19 test at a centre, in New Delhi, Saturday, July 4, 2020. (Express Photo By Amit Mehra)

In what should indicate the spread of Covid-19 in the national capital, results of a serological surveillance of almost 23,000 people, conducted in 11 districts of Delhi, are likely to be announced today.

The National Centre for Disease Control (NCDC) is collating the results, and while the official report is yet to be declared, sources said the positivity rate is around 10%. “Initial results suggest that 10% of the total samples lifted have been found positive. We will submit the report to the Ministry of Home Affairs on Saturday,” said a senior official from the NCDC.

Between June 27 and July 5, a total of 22,823 samples were picked up at random by the surveillance team for antibody testing. During the survey, blood samples were collected to determine if a person is infected with the novel coronavirus. It will also be used to detect if the person was infected with the virus in the past and identify antibodies being produced to combat Covid-19.

In Delhi, testing is done through three techniques — RT PCR, which is the gold standard for testing; rapid antigen, which is faster; and antibody testing to check for prevalence of antibodies developed in a body after recovering from the virus.

The Ministry of Health and Family Welfare is planning to follow up the serological survey with a study to evaluate the prevalence of the disease among the population. The first study was done in May by the ICMR. As per the ICMR, initial findings of the first sero-survey from 65 districts in India had revealed that only 0.73% of the population was exposed to Covid-19.