No new registration of diesel cabs in Delhi: Supreme Court

The apex court allowed existing All India Tourist Permit (AITP) diesel taxis to operate in the national capital till the expiry of their permit, which is issued for a period of five years, and said no renewal of the same would be done. 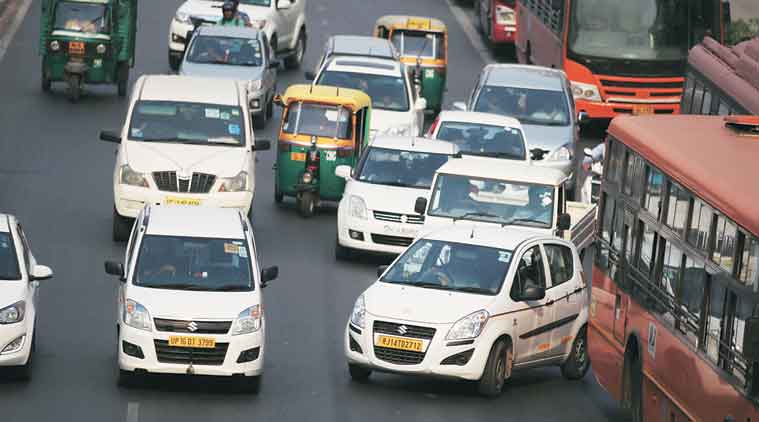 Supreme Court said it would impose the ‘symbolic’ cess if it decides to lift the ban. (Express Photo)

The Supreme Court Tuesday relaxed its ban on diesel taxis in Delhi-NCR, allowing them to ply till their permits expire. But the bench, led by Chief Justice T S Thakur, said the Delhi government will not register any new diesel taxis, and that registration of all city taxis shall be permitted only if the vehicles operate on dual-fuel (CNG/petrol) or purely CNG or petrol.

The bench also underlined that diesel taxis will eventually have to go off the roads.

The Delhi government, the bench said, should work out adequate norms on safety, security and fares for taxis. “Safety and security is an important aspect…you must have seen some of the recent incidents. So, now you make sure these concerns are taken care of,” the bench, also comprising Justice A K Sikri and Justice R Banumathi, told the Delhi government’s counsel.

The court order is likely to free up more than 60,000 taxis, which had to go off roads since they had not switched to CNG. Further, the court-mandated stipulation regarding fare compliance with government norms may affect ‘surge pricing’ used by taxi aggregators, which the Delhi government had sought to stop during odd-even phase 2.

The bench provided relief to taxi operators after modifying its April 30-deadline, which had put in place a complete prohibition on plying of diesel taxis. On Tuesday, the court clarified that the extension till the expiry of their permits was only a one-time measure aimed at giving operators some respite.

“You must understand what we are trying to do here. There has to be a gradual phase-out…diesel taxis will have to go,” observed the bench.

It added that existing all India tourist permit (AITP) taxis will also be allowed in Delhi-NCR for point-to-point services so that BPO firms could use their services. The reprieve was granted after IT industry body National Association of Software and Services Companies (Nasscom) assured the bench that all its future contracts would ensure services of only non-diesel cabs.

Amicus curiae Harish Salve had supported a joint plea by the central and Delhi governments to relax the ban and permit a gradual phase-out of diesel taxis in the wake of inconvenience to the public and to enable the BPO industry, which relies heavily on these taxis to ferry employees, to function smoothly.

Salve also suggested that the Centre should issue norms for regulating taxis with all India permits and decide a way forward for non-diesel cabs. But Solicitor general Ranjit Kumar argued that NCR-specific rules would be difficult to formulate, as AITP rules were meant for the whole country. The bench said it would now hear in July the issues relating to levying a green cess on diesel vehicles and other measures to reduce pollution.

Solicitor general Ranjit Kumar argued that NCR-specific rules would be difficult to formulate, as AITP rules were meant for the whole country.

IT industry body National Association of Software and Services Companies (NASSCOM) assured the court that all its future contracts would ensure that cabs will only be non-diesel cabs.