While the BJP accused the AAP of ‘abuse of power’ and promoting ‘VVIP culture’, Deputy Chief Minister Manish Sisodia clarified that Jain was receiving physiotherapy after two spinal surgeries and alleged that the BJP was trying to make a mockery of Jain's illness to win elections in Gujarat and MCD. 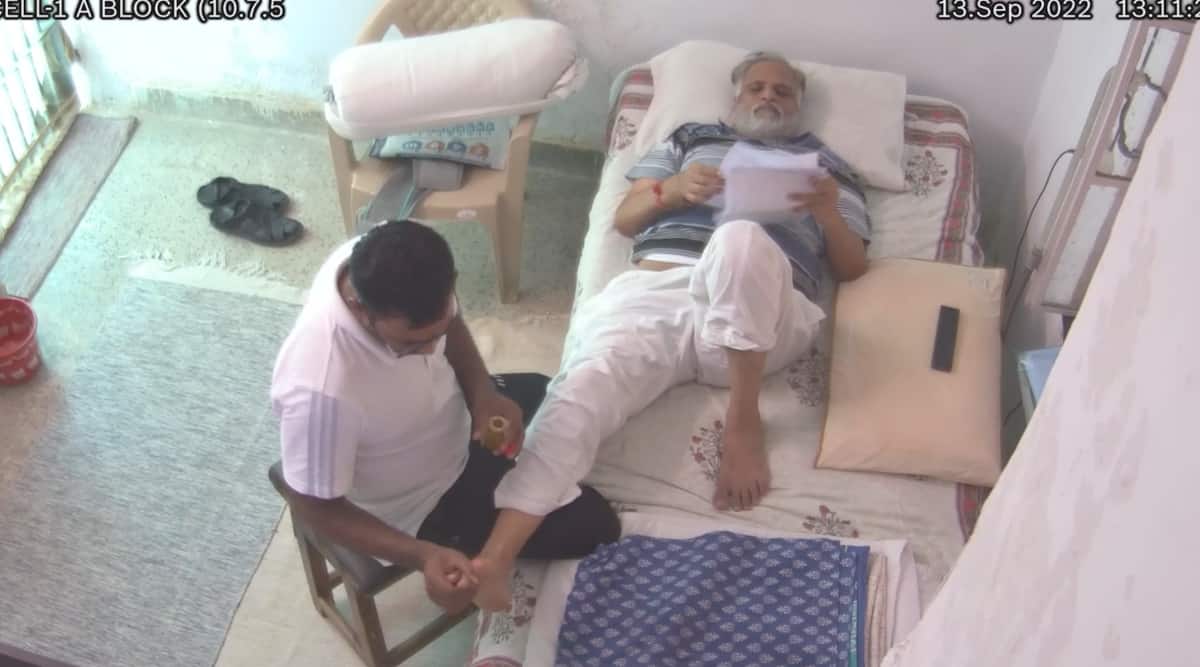 Satyendar Jain gets a massage at Tihar jail.

A video of jailed Aam Aadmi Party minister Satyendar Jain getting a massage in his cell in Tihar Jail surfaced on Saturday, prompting a fierce war of words between the BJP and AAP.

While the BJP accused the AAP of ‘abuse of power’ and promoting ‘VVIP culture’, Deputy Chief Minister Manish Sisodia clarified that Jain was receiving physiotherapy after two spinal surgeries and alleged that the BJP was trying to make a mockery of Jain’s illness to win elections in Gujarat and MCD.

BJP leader Gaurav Bhatia, at a press conference, said, “The ‘kattar beimaan’ thug is getting a massage in jail by violating laws. He’s been jailed for five months now but has still not been sacked as a minister. The video shows VVIP culture.” He also termed the AAP a ‘spa and massage party’.

Reacting to the allegations, Sisodia said Jain had suffered a spinal disc injury when he fell in jail and the accident pinched his nerve. He was hospitalised, underwent two surgeries, and was recommended regular physiotherapy by doctors, he said.

Stating that Jain was diagnosed with L5-S-1 disc damage, Sisodia accused the BJP of politicising an illness and conspiring to keep Jain in prison. “I cannot even imagine that the BJP has stooped so low that it is making fun of someone’s illness. Firstly, they put a man in jail who is innocent; now they are making fun of his illness by leaking this video of treatment,” he said and called it “ghatiya soch, ghatiya harkat”.

Asked if Jain would be removed from his ministerial post, he said: “BJP ki manohar kahaaniyon se mantripad se thodi hata diya jaayega kisi aadmi ko (A person will not be removed as a minister simply because of the BJP’s cooked up stories).”

Taking a dig at Prime Minister Narendra Modi, Sisodia added: “Desh ke pradhan mantri bhi beemaar ho sakte hain, unhe bhi ilaaj ki zaroorat padh sakti hai (The Prime Minister of the country can also fall sick. Even he may require treatment)… But only BJP can go low and do cheap tactics just to win elections. It is BJP’s forte to do politics on someone’s ailments and treatment. No other party except BJP can do this.”

“To win elections, you are making fun of a sick person. Don’t you (BJP) feel ashamed? You should feel ashamed to resort to such cheap tactics,” said Sisodia.

Sisodia added, “A person in jail has the right to receive treatment and therapy. The court instructed the Enforcement Directorate (ED) to ensure that videos should not be leaked. Yet the video was leaked to give effect to BJP’s conspiracy to make a mockery of Jain’s ailment. This is contempt of court order. We will take action on this separately.”

Jain has been in prison since May in connection with an alleged money laundering case registered by the ED. Earlier this week, a jail superintendent was suspended by Delhi Chief Secretary Naresh Kumar over alleged VIP treatment to the AAP minister. He was posted in cell number 7 where Jain is lodged.

“The sacking of the jail superintendent… was just an eyewash for the people of Delhi. The truth is that Jain is the master of of corruption and he is running the business for Kejriwal from jail, that’s why he is being provided special treatment…,” alleged BJP’s Bhatia.

Delhi BJP president Adesh Gupta has also written to L-G VK Saxena demanding a high-level inquiry into the arrangements at Tihar and requested an order for 24-hour surveillance of Jain’s cell.

Ira Khan cheers for father Aamir Khan as he dances to ‘Papa kehte hain’ at her engagement party, watch video