A police motorcycle parked in one of the lanes was torched by the residents. 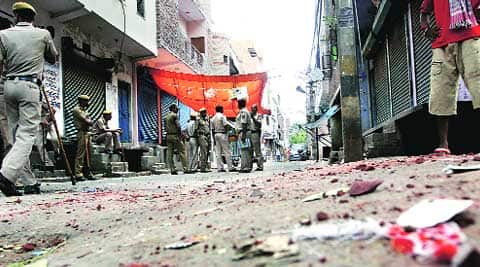 Clashes broke out in Nand Nagri area of Northeast Delhi on Friday, allegedly triggered by a quarrel over kite-flying. Five persons were injured in the clashes between Hindu and Muslim groups in the area.

Police said around 100 residents — youths from Valmiki and Muslim communities — came together to fly kites to celebrate Independence Day. Around noon, a quarrel broke out regarding the positions of kites of residents of C 2 block.

Soon, police said, the situation turned violent, with both groups hurling beer bottles at each other. A police motorcycle parked in one of the lanes was torched by the residents.

During the clash, police said, several windowpanes of a building nearby were smashed. Residents, however, claimed that tension between the two groups began in the morning, because one of the groups objected to the other gambling and playing cards.

Police officers were deployed there till late evening. DCP(Northeast) R A Sanjeev said, “The clash broke out while they were flying kites. The situation is under control now. We rushed to the spot to ensure that violence does not escalate. We will register a case of rioting. We are trying to identify persons who were involved in the violence.”

Man hangs self in office