BJP questions AAP’s ad campaignexpenditure : This is how you could have spent Rs 526 cr

The posters add that as many as “200 new schools and 50 new colleges can be opened with this money and people can get 2,000 new buses. 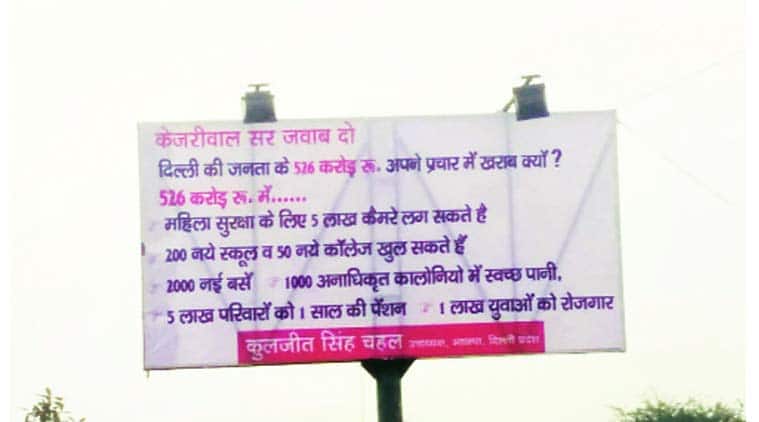 A BJP hoarding in the capital. (Pragya Kaushika)

Upping the ante in its feud with the ruling party in Delhi, BJP has unveiled a series of hoardings questioning the AAP government’s expenditure on its advertisement campaign.

The hoardings, prominently displayed on arterial roads in the capital, ask the government to explain the expenditure of Rs 526 crore on the campaign. They also suggest ways in which the government could have spent the same amount to enhance security measures, open more colleges and provide employment to people.

Addressing Chief Minister Arvind Kejriwal directly, the posters ask: ‘Kejriwal Sir, jawab do (sir, please answer), why is Rs 526 crore wasted on publicity when this fund could be utilised to put up five lakh cameras for women’s security?’

The posters add that as many as “200 new schools and 50 new colleges can be opened with this money and people can get 2,000 new buses. 1,000 unauthorised colonies can get drinking water, five lakh people can get pension for one year and one lakh youth can get employment” with that amount of money.

Explaining the hoardings, Kuljeet Chahal, vice-president of Delhi BJP, claimed that this was the kind of language the AAP understood.

“We can have meetings or dialogues with the Kejriwal government. But it’s the language of hoardings that the AAP government understands, that’s why these hoardings were put up,” said Chahal.

He claimed that “unlike the AAP government, BJP is not spending public money for publicity”.

“They are spending tax payers’ hard-earned money on their publicity. We are paying from our own pockets for these hoardings,” said the BJP leader.

Earlier, BJP’s national secretary and former MLA R P Singh had put up similar hoardings, which sought explanations from the Kejriwal government on its expenditure on the advertisement campaign.

Meanwhile, sources in the AAP government refused to respond to queries about the advertisements.